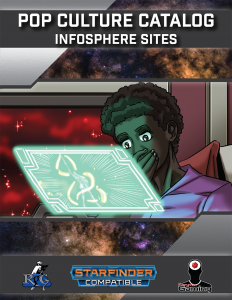 This installment of the Pop Culture Catalog-series clocks in at 13 pages, 1 page front cover, 1 page editorial, 2 pages of SRD, leaving us with 9 pages of content, so let’s take a look!

Now, as always, we begin the installment with a recap of the fandom perk engine that is the foundation of the mechanical benefits of being a fan of something presented within this series – and then we proceed to the various different Infosphere Sites, which, obviously, have been fashioned after internet sites. As has become the tradition for the series, we have each infosphere site provided with a price modifier, a location and a type, as well as a detailed description and a fandom perk. We also get unique logos for each site. Picture, for example, three red hearts, their tips pointing inwards: That’s the logo of 3Kun, the obvious representation of 4chan in the Xa-Osoro system. And yes, I very much love these logos.

9 such sites are provided: 3Kun nets a fandom perk that lets you use Computers to change creature attitudes or bully them using intimidate. I really laughed when I read about Blather, only to have that turn a bit sour – with a stylized blue ramhead, “blats” are sent into the void of public communications – and currently, there is a bit of a controversial discussion going on, as Roksharp Tinderpaw, notorious gnoll activist, downplays the practice of gnoll “salvage” of taking children as collateral….he claims they were going to die of asphyxiation anyway. Kudos for using that as an RPG-angle! Anyhow, you can gather information with Computers or Culture if you’re a fan of blather. Chekkit is the Reddit equivalent, and allows for the influence of public opinion. There also is an interesting tale about a xenophobic nashi dictator who briefly managed to gain control – only to be ousted and exiled. Oh, and take a good look at the name of the fellow…

There is a user-driven encyclopedia here as well – Infopedia! This one has a fandom that lets you, among other things, take 20 with any skill, even with ones that you have no ranks in and are trained only, and it lets you forge Infopedia pages, though the public will catch on. MyFace is the Facebook equivalent, and actually is slightly less sinister than the real world equivalent, though the fandom perk does allow you to make researching you harder via falsified social media presences. Absolutely adorable would be the logo of “Skulk” – a foxholding a stylized planet in their cutre paws – it’s basically Xa-Osoro’s Google, and is an anagram for the combined search engines SearchUs, Kling, Undersphere Navigation, Livefox and KO Search. Cool: The clever nomenclature makes sense in local parlance: “Can’t you just skulk that?” “Skulk is your friend…” etc. – nice. The perk lets you recall information via Computers.

Spaz (PERFECTLY named, imho!) is the Twitch stand-in, and the fandom perk rocks – it nets you a variant of the celebrity icon theme power, and yes, if you do have the theme, you can use it quicker. Love it! Sphereflix is obvious – the huge holotube streaming provides a host of original productions, and if you watch sufficient amounts of material, you can use Culture to identify local creatures as per Life Science. The planet to witch this applies may be shifted, provided you watch enough. And no, I don’t mean “sphereflix and chill” – and yes, this is a thing in Xa-Osoro as well. Finally, there would be Yousphere, the largest video-sharing site on the entire infosphere. Watching it lets you spend 10 minutes to research a Profession, Dexterity- or Intelligence-based skill to attempt it untrained. You can only have one such skill trained, and may only retrain it by taking a 10-minute rest and spending 1 Resolve Point to regain Stamina Points. Fun fact, this, and pretty much all my reviews, are written with some version of the Yousphere precursor running in the background. Helps my busy mind focus.

So, these are the big players – but the pdf provides more: We get DETAILED information on blogs, brochure sites, community sites, e-commerce sites, wikis, e-mail clients, government sites, etc. – and item levels and prices for all of them! Your SFRPG character is drawing their own webcomic and streaming? Well, here you go, all the rules for that. Notes on how infosphere sites work and on how infosphere synchronization works are btw. also provided.

Editing and formatting re top-notch, I noticed no glitches. Layout adheres to the series’ two-column full-color standard, and the pdf sports cool full-color artwork as well as the by now traditional and super-cool logos. The pdf has basic bookmarks for start and finish, in spite of its brevity.

Alexander Augunas and Owen K.C. Stephens do it once more – the infosphere installment of what is quickly shaping up to be one of my favorite RPG-series out there is brilliant. At times funny, at times slightly sad, it hits the hopeful and positive notes that make the Xa-Osoro supplements stand out. This is a future I’d enjoy living in, and the write-ups are literally all killer, no filler – I considered not a single entry bland. From a mechanical point of view, the supplement manages to achieve to remarkable feat of having the fandom benefits not only correlate perfectly to the respective sites, they also are internally consistent in their power-level AND provide meaningful benefits without e.g. Spaz and Yousphere overlapping. In short: This is a winner, worth every cent of its fair asking price. 5 stars + seal of approval, given without even the slightest hesitation.