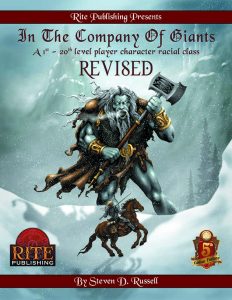 The second revision of the 5e-conversion of „In the Company of Giants“ clocks in at 16 pages, 1 page front cover, 1 page editorial, 1 page SRD, 1 page back cover, leaving us with 12 pages of content, so let’s take a look!

If Jotunnar does sound Norse-flavored, you wouldn’t be wrong (their names sport the Icelandic suffixes of -son and -dottir, denoting “son of” and “daughter of”), but neither would you get the totality of the picture. Far beyond what other product lines offer in either 5e or PFRPG, we receive an in-depth look at culture and mindset of the race – which begins as Medium-sized and only slowly unlocks the true potential of their heritage. Philosophy-wise, the race similarly does take an unconventional stance – there are two dominant ways of thinking, with the first being called Vird.

Vird would be pretty much a philosophy steeped in Norse morale – i.e. cherishing the value of bravery, being forthcoming and true, but this does not extend to traditionally “good”-coded concepts like mercy. Courtesies and proper behavior still are very important and the elaboration of the concept is enticing and well-presented.

Racial trait-wise, the race increases Strength by 2 and they increase your choice of either Constitution or Wisdom by 1. On a basic level, Jotunnar become older than humans and favor a regimented society. At the start of the game, you are Medium and gain proficiency with Intimidation and Persuasion. You do count as one size category larger for the purpose of determining carrying capacity, pushing limits etc. and when you fail a Strength or Constitution saving throw,, you can reroll the save, but must keep the new result. You can use this feature only once per rest interval, requiring a short or long rest to use it again.

The main meat of this book. Crunch-wise, would be the jotun paragon class, which is exclusive to the jotunnar race and gains d10 HD, proficiency with simple and martial weapons, one artisan’s tool, Strength and Constitution saving throw and you get to choose proficiency in two skills, chosen from Athletics, History, Insight, Nature, Perception, Performance and Survival. Nice: Beyond quick build advice, we also get equipment choices and ability-score requirements for multiclassing purposes. While not wearing armor, the class has a natural armor of 10 + the greater of either Strength or Constitution modifier + Dexterity modifier and you may still use a shield in conjunction with this AC boost. The jotun paragon class also gains a slam attack that inflicts 1d4 + Strength modifier bludgeoning damage, which increases to 1d6 and 1d8 base damage at 6th and 11th level, respectively. RAW, it does not note that the jotun paragon is proficient in slams, but I assume so, analogue to other class features.

At 3rd level and 15th level, the jotun paragon gains a mighty cool ability – as an action, you can grow in size (so yeah, you still can adventure with your buddies), increasing your size at 3rd level to Large. Equipment changes size with you and your weight increases by a factor of 8. Items out of your possession regain their size after 1 minute. Now, 5e’s size-increase rules are brutal – in order to maintain balance, the usual rules for size increase are NOT applied for the jotun paragon class. Instead, weapon attacks deal an additional 1d4 damage, which increases to +1d6 or +1d8 at 5th and 11th level, respectively. You may resume Medium size as a bonus action. The upgrade at 15th level allows you to use a second action to grow to Huge size, for a further size and weight increase. Damage boost while Huge is +2d8…and before you ask: No, you can’t be affected by enlarge/reduce while thus grown. Big kudos for balancing this…and for explaining the interaction with e.g. a giant’s sword in a sidebar.

Starting at 5th level, we get rock throwing, which scales based on your slam attack; 7th level lets you swat rocks etc. out of the air as a reaction, protecting your puny allies. Also at 7th level, you gain temporary hit points equal to 10 + number of Hit Dice extended + Constitution modifier whenever you complete a short rest, but only when you actually spend Hit Dice, so no cheesing here. They btw. vanish after a long rest. While you have these temporary hit points, you ignore the effects of the frightened condition – note that you only ignore the effects – you’re still subject to it! Interesting ability!

At 9th level, you gain advantage on all saves that affect humanoids, but not giants. At 11th level, you may execute a crushing blow in melee, which inflicts of +2d12 damage and the target must succeed a Strength save or be knocked prone. The feature may be used twice before requiring a short or long rest to use again, +1 use at 14th and 17th level. 13th level nets perhaps the most hilariously epic ability of the class – at this level, you can take grappled creatures and use them to beat up their friends or throw them. Yes, you are proficient in using other folks as weapon. Yes, it’s cool, and yes, you can smash grappled foes against walls, floors, etc. At 15th level, you double your damage versus objects and structures. At 20th level, you increase your Strength by 4 points to a maximum of 24, gain +10 speed while Large and +20 speed while Huge. Ability score improvements are gained at 4th, 8th, 12th, 16th and 19th level. Minor complaint: You have to deduce that and Extra Attack from the table, but that remains a cosmetic complaint.

Now, as far as player agenda goes, we get a Jotun Lineage, which is chosen at 2nd level and grants abilities at 2nd, 6th, 10th and 18th level. A total of 6 different lineages are provided: Cloud giant, fire giant, frost giant, hill giant, stone giant and storm giant – the classic ones, basically. The respective lineages are pretty flavorful – some abilities tie in with the mythological components associated with giants: Jotun paragons with a cloud giant lineage gain, for example, gain a kind of wildcard Charisma skill proficiency that may be changed upon finishing a long rest, representing their mercurial temper; at higher levels, these jotun paragons gain the ability to treat clouds etc. as solid and may even create duplicates from cloud matter. Fire giants can make nonmagical weapons temporarily magical and fiery, with the option to use Hit Dice as a resource to further enhance the weaponry. And yes, there is a hard cap on the number of weapons you can prepare thus…and having access to a forge increases the duration. When suffering normal fire damage, high level jotun paragons may draw some heat into their armors and at the highest levels, we have the ability to temporarily negate fore resistance or decrease immunity.

Jotun paragons with the frost giant lineage are not simply carbon copies of the fire lineage in cold; instead, they can fortify themselves against cold, gain Constitution-based limited spellcasting (representing runic lore). Really cool: At 10th level, grapples may inflict escalating negative conditions on failed saves, even including temporary petrification! Cool! Hill giants gain a necrotic bite and may regain Hit Dice by consuming flesh, but only once per long rest interval, and only as part of a short rest. Tapping into the cliché of the stupid, tricked giant, you can waltz towards foes if you succeed a save versus charms, illusions, etc., and you gain a thunder damage stomp that deals damage in a small cone and may push foes back on a failed save. Stone giants get a further AC bonus when not wearing armor, proficiencies and some adaptation to the deeps…which comes with a cool angle: Life aboveground feels less real, allowing you to use your reaction to declare one attack incurred in such environments as less real, halving its damage. Finally, the lineage of the storm giant nets you both resistance to thunder and lightning and some storm-themed, limited-use spells – the only lineage that I consider a bit less interesting than it could have been.

Editing and formatting are very good, both formal and rules-language has been kept pretty precise and well made. Layout adheres to Rite Publishing’s nostalgic, old 2-column b/w-standard with its rune-borders. Artworks are mostly stock and b/w. The pdf comes fully bookmarked for your convenience.

Rite Publishing must be congratulated here; The 2nd revision of the Steven D. Russell’s original playable giants, handled by Brandes Stoddard and developed by Dan Dillon, is finally what fans of 5e wanted. Another company perhaps would have moved on after the failed 1st revision, but Rite Publishing is devoted to making things right…and that’s exactly what happened here. You get the evocative size-increases and can still adventure with your buddies; you get the option to become Huge without wrecking balance…and better yet, the lineage abilities are evocative and cool, at least for the most part: I absolutely adore the somewhat fairy-tale-ish flavor that suffuses even brief descriptions of the crunch, how the respective lineages offer different, cool options…in short, I do consider this to be the conversion that the file deserves.

This is, in short, a great little pdf. While I was slightly underwhelmed by the storm giants, the 0ther 5 lineages are pure amazing and this pdf, in short, is very much worth getting. Flavorful, fun and well-made – the second revision gets well-deserved 4.5 stars, rounded up for the purpose of this platform.