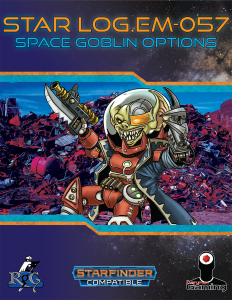 After a brief, flavorful introduction to space goblins within the context of the Xa-Osoro system, we kick off this pdf with the Best-Gob paragon archetype, which requires, obviously, that the character in question is a space goblin. This archetype nets the best-gob Skill Focus with Engineering at 2nd level as an alternate class feature. At 11th level and every 4 levels thereafter, the insight bonus increases by 1. Additionally, at 4th, 6th, 12th and 19th level, you may take any feat with the goblinoid subtype as a prerequisite as a replacement class feature bonus feat.

The pdf also presents 12 new feats (which will probably bring a smile to plenty of PFRPG-veterans):

-Burn! Burn! Burn!: +1 insight bonus to attack with fire damage dealing attacks; additionally, when attacking with a non-fire damage dealing spell or attack, you can convert half damage into fire damage. Depending on your campaign’s power-level, this may warrant scrutiny, as this can render regular weaponry better than dual damage type equivalents. I’d ban this in my game.

-Everything is UBPS: This is cool: It lets you expend items when using Engineering to craft or repair as if they were UBPs worth 90% base price; broken items still yield 50% UBPs. Cool!

-Expanded Tinkering:  Use a move action to affect an ally’s weapon in reach; the weapon may not eb broken, which nets +4d6 damage for single-target weapons, +2d6 for AoE weaponry (which, I assume, includes automatic weapons); this only applies to the next attack, and at the start of your next round, the weapon becomes broken. Not a big fan of this conversion.

-Explosive Resistance: +2 to AC and to saves vs. blast and explode weapons and AoE effect spells. This doubles against “attacks and spells that you use.” Not sure what that means – proficiency? Ability to cast them? Effects that originate from the character? This could be a bit smoother.

-Get Into Everything: +2 to Strength checks to break stuff; also adds a racial bonus to Improved Combat Maneuver (sunder), if you have it. The feat also allows you to make Engineering checks to pinpoint weak points in a construction, with DC scaling based on item level. Nice one!

-Goblin Song: Language-based swift action demoralize versus a target, potentially affecting allies of the target within 30 ft., though the Intimidate check is harder for these secondary targets. Nice: Has proper menacing gaze expertise talent synergy.

-Improved Tinker: When using the tinker racial trait, ignore broken condition for 1d4 rounds, after which an object ceases to work for 10 minutes. Nice one, and kudos for the anti-abuse caveat!

-Junkomancer Adept: Technomancer feat that increases CL for spells with “junk” or “bot” in the name by +2 for the purpose of duration, and fabricate scrap becomes more potent. The spell-reference is not italicized properly, though.

-Junkomancer Expert:  This one builds on the previous one, and modifies the cache capacitor. The spells list can be cast at will, but their effects end after 24 hours. Interesting!

-Jury Rigging:  Lets you create a fragile repaired version of an item. Fragile? Yep, this may make your weapons break rather easily – the property is noted here. That being said, this lacks e.g. the precision and differentiation of the excellent jury-rigging rules presented in this very series. I strongly suggest using Star Log.EM: Jury-Rigging Rules instead.

-Master Junker: Move 10 ft. through difficult terrain as if it were normal terrain, but only for non-natural difficult terrain. Also nets you a +1 untyped bonus to Engineering checks to identify creatures, recall knowledge and craft or repair technological items.

-Unexpected Critical (Combat): When you attack with a broken weapon you used tinker racial trait on, and your attack roll’s result is a 19, you may spend 1 Resolve Point to treat the attack as a critical hit, but only if you’d hit the target with the 19. On a hit, you deal double damage and trigger any critical effects of the weapon, but at the end of the turn, the weapon is destroyed.

Editing and formatting are good on a rules-language and formal level, and the pdf comes with a nice artwork. Layout adheres to the series’ two-column full-color standard, and the pdf has no bookmarks, but needs none at this length.

Jacob McKiernan’s space goblin options are interesting, ranging from the very clever to the slightly less exciting – the material basically takes old PFRPG material and re-contextualizes it. All in all, I consider this to be a nice expansion for space goblin fans, but wasn’t too impressed with quite a few of the feats within. My final verdict will be 3.5 stars, rounded down for the purpose of this platform – recommended if you were a fan of PFRPG’s goblins, but otherwise, not the strongest offering in the product line.

You can get these options here on OBS!

Missed the excellent Jury-Rigging Rules? You can find them here!