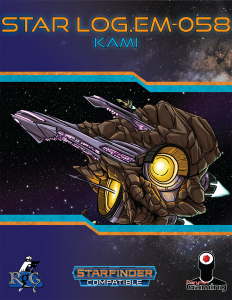 On the introductory page, we get a pretty massive subtype graft that grants kami immunity to bleed, polymorph and mind-affecting effects, resistance 10 to three energy types, as well as CR-based telepathy. Additionally, they designate a ward, which may be a creature, location or object. The kami may merge with the ward and share senses as a standard action, and emerge just the same way. Nice: This takes mounting wards into account regarding size category implications. While within 120 feet of the ward, the kami gets its CR as fast healing. If merged with the ward and the ward dies, so does the kami (no save!); if the ward dies while the kami is not merged with it, the kami instead becomes permanently sickened until establishing a new ward, which takes a full year! They also get ward empathy, making its starting attitude to respectively qualifying beings or those that inhabit the ward very positive. Nice framework!

Beyond a pretty massive and well-written piece of fluff, this supplement contains three different kami statblocks: At CR 1, we have the kokugami, a diminutive kami based on the expert array, capable of firing beams of sonic energy. The ray has no range noted, which is a bit annoying. That being said, I do like that the kami has unique abilities that reward merging with the host, allowing the kami to accept Constitution damage to reduce damage incurred by the host to nonlethal. And no, it can’t be cheesed. They also enhance the host’s healing while resting. Nice, can I have one? Minor nitpick: The statblock is missing its fast healing 1 defensive ability line.

At CR 10, the torijigami uses the combatant array, and treats its weapons as though they had the holy fusion – erroneously referred to as “infusion” here and not italicized. This fellow has no unique ward-twists. KAC isn’t properly bolded.

Finally, the CR 25 hozonsugami kami would be a bit odd, in that its CR is incorrect – it is clearly a CR 15 creature regarding EAC and KAC, Hit Points, etc., not, as noted, a CR 25 critter. It can fire rays of cosmic radiation that also cause radiation (severity rating would have been nice…), and it has a couple of cool tweaks –like the ability to attract meteorites to bombard nearby targets. They can also use their SPs while merged with the ward. On a nitpicky side, the save-names of this one aren’t properly bolded.

Editing and formatting can still be considered to be good on a formal and rules-language level, but e.g. the CR glitch is nasty, and the formatting oversights for the statblocks are uncommon to see in Everyman Gaming/Everybody Games’ offerings. Layout adheres to a two-column full-color standard, and the artwork included is nice. If it made you expect a starship-sized kami, you’ll be disappointed, though. The pdf has no bookmarks, but needs none at this length.

Alexander Augunas’ kami are inspired in their concepts and ideas, but also, alas, slightly rushed regarding their formal criteria. While certainly not bad, a few of the formal glitches could confuse less experienced GMs. All in all, a cool, but also somewhat rushed-feeling supplement, resulting in a final verdict of 3.5 stars, rounded up due to in dubio pro reo.

You can get these kami here on OBS!