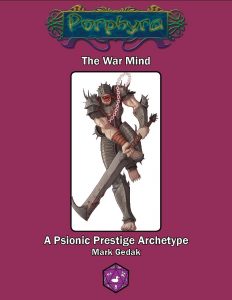 This pdf clocks in at 7 pages, 1 page front cover, 1 page SRD, leaving us with 5 pages of content, so let’s take a look!

We have a psionic prestige archetype here, one that combines the war mind PrC and the fighter class. Chassis-wise, the class must be non-chaotic, receives d10 HD, 2 + Int skills per level, proficiency with all simple and martial weapons,, all armors and shields, but not tower shields. The class has full BAB-progression as well as good Fort- and Ref-saves and begins play with a Combat feat as well as Wild Talent. 1st level nets one psychic warrior power and every 3rd level after that, he gains another one and Wisdom is his governing attribute for his psionics. The maximum power level he can manifest is 5th.

2nd level unlocks the ability to consult the codex for 1 round, gaining a +1 bonus to AC, CMB, CMD, initiative, melee attacks, melee damage, ranged attacks or ranged damage. The bonus increase to +2 at 6th level and further increases by + every 5 levels thereafter. 3rd level allows for the free action +2 Str and Con-self-buff, lasting one minute. This can be used 3/day and is increased to +4 at 13th level. 5th level, he may, as a free action, buff his AC by +2 3/day, increasing the bonus to +4 at 15th level. At 9th level, the war mind may pay 4 power points to gain an additional use of either ability.

3rd level nets bravery (relevant for use in conjunction with Rogue Genius Games’ amazing Bravery Feats, for example) and 6th level and every 6 beyond that lets the war mind replace a combat feat with a psionic feat and the pdf has a caveat that prevents the swapping of prereq-feats.

7th level nets DR 1/-, which is upgraded to 2/-. at 17th level. 11th level lets the warmind choose a square adjacent to the one he attacks, applying his attack to both squares. Cleave-synergy is provided for and, as a limit, these attacks may not be performed after having moved 10 ft. or more. 19th level lets the war mind 1/day add +10d6 damage as part of an attack and as a capstone, they may reassign the floating bonuses granted at 2nd level as a swift action.

The pdf comes with excessive favored class options for core races as well as uncommon ones, porphyran races, etc. As a minor complaint, the skulk’s FCO’s absent. The pdf also features a sample character, garish Falnor, an half-ogre war mind, who is presented at 1st, 5th, 10th and 15th level.

Editing and formatting are good, I noticed no grievous hiccups apart from the missing FCO. Layout adheres to Purple Duck Games’ two-column standard with purple highlights and the pdf has no art apart from the cover. The pdf comes fully bookmarked, in spite of its brevity. Nice!

Mark Gedak’s take on the war mind is a solid blending of the concepts; the class plays as intended, is a valid choice and ability dispersal is neat as well. That being said, I found myself wishing that this did a bit more with the floating bonuses and the power points to enhance the self-buffs…but that may just be me. In the end, this is a decent, inexpensive little prestige archetype, well worth the asking price. My final verdict will hence clock in at 3.5 stars, rounded up to 4 due to in dubio pro reo.