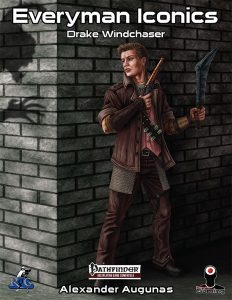 The second installment of Everyman Gaming’s Everyman Iconics-series clocks in at 27 pages, 1 page front cover, 1 page editorial, 5 pages of SRD, leaving us with 20 pages of content, so let’s take a look!

So, who is Drake Windchaser beyond a character that we’ve seen in plenty an Everyman Gaming supplement’s artworks? Pretty simple if you know one series: Are you watching Supernatural? He’s Dean Winchester. (Get it? If you’ve got really sloppy pronunciation, Windchaser <-> Winchester…) Raised on an open road, lost his mother to a shadow demon; brought up as a hunter of evil by his father, who then vanished, estranged from his brother Sal, who has taken a back seat from adventuring…yep, this is pretty much, note by note, Dean Winchester’s origin story and the personality provided matches this as well.

Build-wise, Drake Windchaser, unsurprisingly focuses on identifying monsters and dealing with them with extreme prejudice, with his base-classes being gunslinger and ranger, though the ranger is modified with the monster hunter archetype and the gunslinger with the pistolero archetype, both of which have been reprinted here for your convenience. Though his first level is gunslinger, Drake’s build focuses more on the ranger aspect, with the ratio of levels being 5: 15 between the classes over his 20-level progression.

The character table provided notes the advancement chosen for feats and attributes at the respective levels and the table also features a special column that lists the choices granted by combat styles, favored terrain, etc. As befitting of the pistolero archetype, drake employs a number of close-quarters feats over the course of his levels, emphasizing flexibility with his pistols. Once again, the respective feats are reproduced herein. Drake’s chosen traits, killer and kin-bond are well-chosen and reproduced here alongside his deeds.

Now the monster hunter archetype, in case you didn’t know, was originally created in Paranormal Adventures and as such, the pdf provides guidance to replace the archetype and go with a non-archetype’d iteration. The spells chosen by Drake are listed and provide flavorful choices that do a nice job of emphasizing the choices made.

And then, the massive meat begins – we get drake, fully statted, from humble level 1 to his level 20 iteration. Drake’s build is pretty efficient; not minmaxed to the n-th degree, but a character that should work just fine within the confines of most games. Drake, as provided, employs heroic NPC wealth and ability scores.

Finally, the last couple of pages represent a more printer-friendly landscape layout change to depict drake as a sample pregen for 1st, 4th and 7th level. Very nice: here, the abilities are fully depicted, which renders “getting into” the characters mechanics pretty simple. At the same time, this is also a point where I need to nitpick a bit: Drake’s pregen versions, as presented, do not state the point-buy used, nor do they feature notes on how to scale him up or down; that would have been the icing on the cake.

Editing and formatting are very good – apart from some minor hiccups like a missing blank space or the like, I found no grievous glitches. Layout adheres to a nice full-color two-column standard and the pdf comes fully bookmarked for your convenience, though individual statblocks (or the pregens) do not get bookmarks, which is a bit of a pity. The pregens being more printer-friendly than the rest of the pdf is a nice touch. Artwork-wise, Jeff Strand and Jacob Blackmon manage to generate a concise aesthetic.

Alexander Augunas’ build for Drake is effective and solid and hits its mark, representing Dean Winchester in PFRPG, pretty damn well….or not, depending on your perspective, for the build has the unfortunate drawback of me having seen every single episode of Supernatural so far – my girlfriend’s really into the series and I get why. While I personally think the series has peaked when they killed off the supporting cast and basically made the “final episode” and has since nuked the fridge, I consider it to be enjoyable schlock (meant in the most endearing of ways!) – but it is frankly here that I feel the structure of the Everyman Iconics-series should have accounted for the stuff that happened. I mean, come on! Spent time in Purgatory, mark of Cain, agent of diverse entities, beloved of the Darkness…there is so much cool stuff you could do with templates to the NPC-version of this guy…

Instead, the Dean…eh…Drake iteration we get is pretty much a progression of the character through the 20 levels that is, personality-wise and build-wise, a linear progression of an early Dean…eh…Drake, when the source-material would have lent itself to so much more insanity. That is not a bad thing in itself, but it also means that, with the minor hiccups mentioned, I consider the character to be slightly less than what his potential would have yielded. If you want a nice, efficient build, Drake is worth getting. If you want the extra-mile and a representation that follows the series, you may end up disappointed on a high level. Hence, my final verdict will clock in between, at 4.5 stars, though I will round down for this one.

You can get this character/pregen here on OBS!