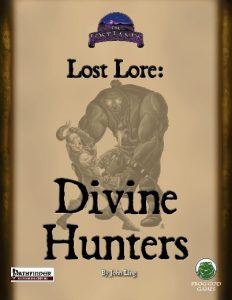 This installment of Frog God Games’ Lost Lore-series clocks in at 8 pages, 1 page front cover, 1 page editorial, 1 page SRD, leaving us with 5 pages of content, so let’s take a look!

Gods in pretty much most fantasy games loathe directly interposing their will on the mortal world; there is, for the most part, a good reason for that from a narrative point of view. While I loved the gods coming down to Faerûn as much as the next guy, the fallout of direct deific intervention opens up a lot of questions: Pertaining the importance of mortal free will, of why the deities don’t fix all the issues themselves, etc. The Scarred Lands back in the day, with their post-apocalyptic, dark nuances did a great job and depicting the aftermath of divine struggles and deities with a more hands-on-approach, while in the vast landscape of ridiculously powerful characters in Faerûn, the impact of deities frankly wasn’t as pronounced due to the sheer number of quasi-demigods stalking the lands. At one point, one of my players observed that every second town seemed to have its own archmage…and while I don’t concur with that assessment, I do understand the sentiment.

Anyways, in the Lost Lands, deities do have their agents to send after mortals that really annoy them (and don’t (yet) warrant a herald or full-blown crusade. These beings, the divine hunters, are called nel’barzoth, formed from the very stuff of the planes and upon being destroyed, they evaporate into a nauseating fume…an information that can only be found in the flavorful introduction, but oddly not in the respective entry. The hunters are divinely customized to match the alignment of their deity. Similarly, damage reduction relies on alignment: Good nel’barzoth receive DR/evil and vice versa. Neutral nel’barzoth instead receive DR/silver. As an aesthetic nitpick, the wording here slightly deviates from the usual nomenclature – “gaining evil DR” is not appropriate rules-language last time I checked. All nel’barzoth are immune to cold and poison and has resistance to acid, electricity and fire, determined by their power level, i.e. 5, 10 and 15 for lesser, intermediate and greater nel’barzoth respectively. They also gain SR equal to 11 + CR and may 1/day cast atonement and 2/day plane shift, but only to arrive at the target’s location, with both being cast as an SP. Finally, the spell-like abilities of these critters include healing options, with their relative strength being determined by the power of the divine hunter. Nel’barzoth gain the domain powers of one of their deity’s domains – conveniently pre-chosen, yes…but frankly, to avoid the skipping of books, actually including the domain powers granted in the statblock would have been nice. As written, I must, for example, look up the precise effects of bleeding touch. Granted, it’s a minor inconvenience…but still.

The weakest of the nel’barzoth would be the xillix at CR 4; quinbacs clock in at CR 9 and Ziphnas at CR 15. All of these creatures have in common that they have access to the smite infidel ability, which means that they add +5 Cha-mod to atk and + HD to damage versus the target creature. They also gain a deflection bonus equal to Cha-mod to attacks versus the foe and +1 to atk and damage versus those helping the infidel in the case of the xillix. More powerful nel’barzoth receive more significant boosts to their attacks and damage and may more easily confirm crits or a more devastating nature versus the target. This ability is a bit weirdly named, considering that smite usually implies an activate choice absent in the ability – the creature is created to hunt down the trespasser/heathen and thus, the target is pretty fixed. Though, again, this is primarily an aesthetic nitpick. The Ziphna also adds his Charisma bonus to AC and CMD as a sacred or profane bonus (I assume neutral ones to have a choice of either, but am not sure) that is even maintained while flat-footed. Weird: The Ziphna has this cut-copy-paste glitch: “At 8th level, as a swift action..” – they don’t have levels, which make the weapon master ability a pretty obvious cut-copy-paste glitch of the domain. Yep, oddly, here the domain ability has been copied in.

This is not the end, however – the pdf does provide notes on the option, at the GM’s discretion, of 3rd tier mythic characters with the divine source universal path ability gaining the limited ability to create these beings, though doing so, ultimately, is very taxing. Speaking of the mythic: The Ziphna is not the most powerful nel’barzoth – that would be the CR 22/MR 9 mythic ziphna, who do not automatically miss on natural 1s. Unfortunately, we once again have pretty obvious cut-copy-paste inconsistencies – the ability employs the 2nd person singular, directly speaking of “you.” Additionally, 1/round, they may compare an attack roll with an attack that hit, negating it on a successful roll – not a fan there, considering the swingy nature of such rolls. The domain ability suffers from a similar cut-copy-paste hiccup as that of the Ziphna…and I couldgo down through the abilities of the monster, one by one, and determine by how they are worded the type of context they were originally taken: “You”, “The monster”, reference to non-mythic ziphna…and no truly unique ability. You may not care about one ability talking about “you” and another using the 3rd person – I actually do, not when it’s one hiccup somewhere…but if it is persistent…well, then I do. It’s a simple thing to catch and there is basically no reason for this to be here, apart from “was cut copy pasted and never edited.”

The pdf concludes with advice on creating your own nel’barzoth and 1/2 a page empty.

Editing and formatting are not up to par to the standard Frog god Games has set – from cut-copy-paste remnants to non-italicized spell-references, the pdf has a couple of inconsistencies that should have been caught. Layout adheres to Frog God Games’ two-column full-color standard and the pdf has no bookmarks, but needs none at this length. The b/w-artwork provided is excellent.

Gosh darn it. I like John Ling’s nel’barzoth. I would love them to come with a selection of unique abilities by domain and more customization options, but I enjoy the concept and the execution is generally solid. However, it does show that John also doubled as editor and developer. Editing and developing one’s own writing is SIGNIFICANTLY harder than taking care of the material of others. Believe me, I’m speaking from my own experience. I understand how this has happened, though the extent of obvious cut-copy-paste glitches goes beyond what I would consider understandable.

Don’t get me wrong…the nel’barzotha re functional as presented…but the glitches make this feel rushed. And frankly, the anger over such glitches somewhat soured the pdf for me. Let me reiterate: This is not a bad pdf…but considering the awesome critters out there, several penned by John Ling himself, I can’t help but pronounce the divine hunters as presented wanting. They could have been good, but as presented, I can’t go higher than 2 stars for these guys.

You can get this pdf here on OBS and here on tabletoplibrary.com.