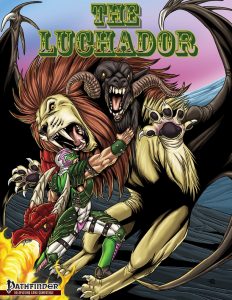 The luchador class, chassis-wise, receives d8 HD, 6 + Int skills per level, 3/4 BAB-progression, good Fort- and Ref-saves, proficiency with simple weapons and gains basically a monk’s unarmored AC-bonus progression, but uses Charisma as governing attribute for it. Similarly unarmed damage increases to 2d10 at 20th level…and yes, Small luchador-damage-table included. First level nets the luchador the vigilante’s double identity, with his masked persona being his larger than life luchador personality and thus, discovering his social identity is usually not as big a problem. He also treats his luchador levels as both vigilante and monk levels for the purpose of feat/talent/etc.-qualifications and receives Improved Grapple as a 1st level bonus feat. The luchador also uses his class level instead of his BAB to calculate his CMB and CMD and is treated as having at least Intelligence 13 for the purpose of combat feat prerequisites.

Similarly, at first level, the luchador chooses one of three stables: Freestyle luchadors gain +1 to Acrobatics and Intimidate checks made to demoralize, +1 per every 5 class levels gained, Oil Wrestlers may spend 1 minute preparing themselves to gain +1 to CMD vs. grapple, bull rush, drag, reposition, increasing similarly Disguise faster also decreases the oil application time, which is a nice addition here. Finally, the sumo stable weigh twice as much and may target adversaries of +1 size larger than they usually could with combat maneuvers, with subsequent increases in weight and size categories you can affect. Yep, you could potentially suplex dragons or even the tarrasque. Come on, that is one awesome visual!

The luchador also has a form of social/spiritual clout called Corazon, which is gained at 2nd level; for as long as they have one, they add +1/2 class levels to feint DCs and Intimidate to demoralize DCs. Corazon is lost upon being unmasked, which requires being pinned or the like. Corazon is regained by defeating an opponent of a CR greater or equal than his own sans assistance…or defeat a foe who has previously unmasked him. Starting at 2nd level, they also inflict + Charisma modifier damage whenever they inflict nonlethal damage via unarmed strikes, grapples, etc., +1d6 at 5th level and every 3 levels thereafter, rewarding heroic, good behavior. Like it!

Starting at 3rd level and every 3 levels thereafter, the luchador may select a social talent, with 6 new ones added to the array provided by the vigilante. Some of these have the corazon-descriptor, decreasing their efficiency when the luchador has no corazon left: Ancestral Guidance improves the Knowledge (nobility, hostory and religion)-checks. Mchaismo/Marianismo lets the luchador take 20 on a non-UMD Cha-based check once per day, +1/day at 7th and 15th level (take 15 sans corazon). Shamanic Inheritor lets him 1/week call a shaman of his class level to perform a spell for him (cool) and at 12th level, another talent even may provide a means to be raised from the dead 1/month by such an entity. Stable Master nets you a neat stable income (get it…hahaha…sorry, will put a buck in the bad pun jar later) and The People’s Champion provides a chance to be warned of ambushes, plots, etc. in areas where his renown has spread.

4th level provides the aerial takedown class feature, increasing his jumping distance, further improving it by +10 ft. per 4 class levels, allowing for a combination with a charge, grapple at the end, and potentially crash flying creatures to the ground. So cheesy and awesome – I adore it! Also at 4th level and every 3 levels thereafter, the luchador may select a stable talent, which contain the option to wear armor in conjunction with their unarmored AC, swashbuckler poaching (including the Dueling Cape Deed), short-term dazing, immediate AOE-demoralizes after knocking foes out, directing escape attempt, including teleportation, into devastating throws, ki-poaching (including short-term flight)…and so on. There also are amazing stable-exclusives like setting yourself ablaze if you’re an oily wrestler, gaining nigh-inescapable sumo-grips, follow up attacks to grapples or trips…or, obviously, gaining a vigilante talent, though this one probably should have a “can be taken multiple times”-caveat.

The talents deserve special mention in particularly when combined with the 15 (unless I miscounted) new feats: Cloak throws that combine feints with grapples and throws, Dragon Style-synergy special charges, gaining a tattoo that lets you enchant your unarmed strikes, Dopkicks, Suplexes, alternate damages caused via Eagle Strikes of the Serpent that double as short-term debuff, combining elemental fists with grapples, eyegouging and nosebreaking and even Tag Team’s an option. Why am I talking about the feats now, right in the class discussion? Well, because they are precise, complex, employ concepts you can’t usually execute well…and because they help the class gain something you only rarely see: When you take the feats in conjunction with the talents, you can generate an absolutely amazing combo-playstyle that lets you do something different a lot of the time; I have not seen a martial class with this much combo potential often; favorites like Interjection Games’ Master of Forms, Assassin or certain Akashic classes or the Swordmaster come to mind – I love this one’s options.

Beyond the basic set-up of the class, the pdf also features a ton of archetypes, 8 to be more precise: The Blood Breaker gets a mutagen instead of skillful combatant and may select associated discoveries…but I wish its engine had further emphasized this. The Dancing Dervish must Perform (dance) to gain an AC-bonus and instead of the 4th level talent, momentum helps him substitute his check for attacks, with 10th level’s whirlwind strike providing this for all attacks, with modified math. Not a big fan of this one; it doesn’t click and while the skill vs. CMD with the mods is okay, the matter of fact remains that skills can easily be cheesed. The Earthbound gains the stalwart defender’s defensive stance at 4th level, gain a social skill bonus and a capstone, that increases their defensive abilities. Okay tweak of the engine, but could have gone further in my book. The Ki Striker gains Elemental Fist at 1st level, are locked into spiritual power as the 4th level stable talent and may, at higher levels, send forth surges of energy via ki and gain a deadly array of ki-powered strikes at a higher level. I like this one, though it once again could further develop the theme.

The Lichador would be one of my favorites, gaining undead resistances, additional damage versus the undead as well as several unique stable talents – from blood drain to a vargouille’s paralyzing shriek (yep, with an end after one attack for balance’s sake – thank you!) and high level energy drain/mummy rot or becoming shadowy, the theme of this archetype is amazing and it ALSO changes the engine to play differently LOVE this one! The Masked Beast gains the hunter’s animal focus via his totem mask, with different abilities depending on the animal emulated and they also gain a proper natural weapon – codified perfectly and 4th level unlocking wild shape – another definite winner here that radically changes the playstyle! The Masked Saint would be the pala-crossover option. Finally, there would be the rudo – these guys usually are the villains, the heels, the guys you love to hate – masters of dirty tricks and sans corazon. They also gain teamwork feats and an accomplice cohort…and I kinda like the idea here, but considering the loss of power that the lack of corazon provides, I don’t really consider these guys perfectly balanced – they can use an upgrade.

I am a HUGE fan of how the pdf handles favored class options: Instead of a bland one-line note of crunch, each race covered also notes the take of the race on the class – and the FCOs are neat and go beyond core: Skybourne’s extensive race-catalog receives support here – kudos for going the extra mile!

The pdf also features rules for wrestling oils, two types of masks, steel-backed folding chairs and tables and 7 magic items: Laces that enhance your charging (and prevent embarrassing stumbles), powerful championship belts taht combine deflection bonuses to AC and a bonus to Strength and Con, further enhancing the item’s potency when defeating worthy foes (yes, concisely defined). A vial of renewing oil and a total of 4 enchanted masks complement this section. Personally, I’d have priced the belt higher, but that may be me. Amazing: One of the masks provides a means to heal when attacking, but cannot be abused and comes with an appropriate Achilles heel. Two thumbs up!

Conclusion:
Editing and formatting are very good on a formal level, excellent on a rules-language level. The pdf tackles highly complex subject matter and boils it down to concise options. Layout adheres to a solid 2-column, full-color standard and the pdf comes fully bookmarked for your convenience. The original pieces of full-color artwork are internally consistent and employ Jacob Blackmon’s signature style.

Michael Sayre’s Luchador takes one of the most maligned, hated mechanics in Pathfinder and makes it amazing – I usually don’t grapple a lot as a GM, nor do my players…the luchador may well change that. The damn cool combo potential of the class allows for some seriously cool experimentation and exceedingly rewarding “OMG, SEE WHAT I DID THERE?!?”-moments – so yes, the luchador class-frame with its feats is amazing. Similarly, I loved the detail given to the racial options and the magic and mundane items also are great. So all amazing? Well, almost. On the archetype-front, this felt a bit like it followed two design philosophies: On one hand, we get a lot of minor engine-tweaks and then there are those amazing bits like the Lichador.

When seen back to back, it becomes pretty much immediately apparent, that the Blood Brother, for example, could carry SO MUCH MORE. I mean, come on, Mr. Hyde luchador? That’s 10 types of awesome and deserves some cool combo-mechanics – burning mutagen duration for special tricks, blood lusts, odd mutations, acid pustules…there is so much to be done here…and the pdf settled for the base minimum. I know that this is me being a damn, spoiled brat of a reviewer, but I do feel that the excellent base class deserved more of the complex, cool archetypes.

To sum this up: The luchador is an excellent class and one that will, with a cosmetic reskin, feature for several monk orders in my games. It is a design-feat and fun to play and definitely a class for players that usually are bored by martials. It is rewarding and great…but the archetypes, as a whole, only reach the level of good to very good as a total, not the excellence of the rest of the pdf. As such, the pdf misses by seal of approval by a tiny margin, but I will still remain with a definite recommendation of a 5-star-rating.

You can get this damn cool base class here on OBS!