EZG reviews In the Company of Medusa

In the Company of Medusa 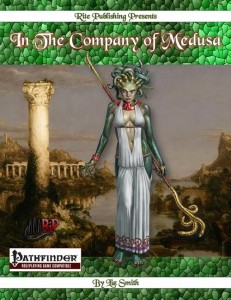 This new supplement in Rite Publishing’s “In the Company of”-series is 19 pages long, 1 page front cover, 1 page editorial, 1 page SRD, 2 pages of advertisement, so let’s take a look, shall we?

“We were born from blood and tears, venomous as jealousy.” If you’re like me, these words resonate – as has become the tradition with Rite Publishing’s offerings, this pdf is written in in-character narratives, as told by characters to Qwillion of Queesthaven – and the prose here is…well AWESOME. The medusa-society is described in ample detail as per a schooling book/an instructor, including information on how to keep both scales and snake-hair proper and trim and keep the latter in control – fluff-wise, these paragraphs are pure gold; Take for example the mentioning of a bed of invisibility, hinted at , but never explicit elaborations of subtle and brute force ways of seduction… these pages reminded my pleasantly of Catherynne M. Valente’s Orphan’s Tales-series and author Liz Smith has indeed delivered pages that are not only a joy to read, but which breathe vast narrative potential for adventuring hooks, while, with the three dominant philosophies (Euryale, Sthennos and Medusa) covering all types of way of life/conceptions of how medusa act – kudos, but can the crunch live up to the fluff?.

Regular medusa get +2 to Con and Cha, -2 to Str, darkvision 60 ft., all-around vision, a secondary natural bite attack at 1d4, a poison (DC 10+1/2 HD+con-mod for 1d2, 6 rounds, cure 2 saves), immunity to medusa poison and the petrified condition with the exception of the own gaze and a petrification gaze – usable 1/day as a standard action, range 30 ft, save scales with HD and is based on cha. Said petrification, however, is not permanent until 11th level/HD and lasts until then 1 round per HD.

Greater Medusa get +2 to one ability score of their choice, darkvision 60 ft., all-around vision, 1d6 secondary natural attack with the same poison as their regular kin, the same immunities and petrification gaze, but also cannot be tripped due to a lower body of a snake – which conversely also precludes them from having a slot for feet.

We get age, height and weight tables for both and 15 (!!!) alternate racial traits – unfortunately, the very first would be alternate racial attribute modifications that have been mixed up – +2 Con and Cha, -2 Str replace..+2 Con, Cha, -2 Str? That ought to read something like +2 to Dex, at least judging from the text – unless, of course, said racial trait is intended exclusively for greater medusa – which I’ll assume due to in dubio pro reo, even though the specifically mentioned attribute-suite belongs to the regular medusa. Another alternate trait nets +2 Con and Int, -2 Dex and getting augury and later divination or commune in lieu of darkvision is possible as well. Archery mastery with a chosen bow type (in exchange for poison) can also be found, as can a trait that nets the hold breath quality of amphibious creatures, +2 to swim and two secondary claw attacks at 1d4 in exchange for medusa immunities and all-around vision. Another trait allows the medusa to gain a point (up to a maximum of 10+HD) whenever they roll a “1” on an attack or saving roll, with the option to exchange a point for +1 on an attack or saving roll – nice for unlucky players. +2 to saves versus necromantic spells or cha-based skill checks (regular medusa only) as well as three traits representing aforementioned 3 philosophies can be found herein, as can one that sees a medusa ritualistically shave her hair in exchange for the extra hex or extra malediction-feat – cool 3pp-synergy here.

We also get a suggestion of suitable archetypes (nice, seeing how many are out there) and favored class options for Alchemist, Bard, Druid, hellion (by SGG), Magus, Malefactor (by TPK Games), Occultist (Pact Magic by Radiance House), Oracle, Ranger, Rogue, Sorceror, Shaman (by Kobold Press) and witch  -Very cool to see this level of support for some of the finest 3pp-classes out there!

Of course, we also get 2 unique racial archetypes, with the first being the gorgonic shaman for the druid  -these shamans are restricted in their choice of companion and get impeded wild-shape, but also learn to commune with the earth (making catching them by surprise HARD unless flying) to temporarily take on an improved aspect that allows them to temporarily enhance their own body with a variety of special tricks – from uncommon speeds to a temporary petrification stare up to natural weapons, this archetype allows other characters to take on a semblance of being medusa-like or medusa to offset some of the losses they may have incurred via the choice of their alternate racial traits – nice indeed, as it conjures up images of a society of servants striving to take on aspects of their mistresses…

Sorcerors may opt to become stone-eyed sorcerors, who may supplement their body temporarily with the fortification quality to nondetection and similar defensive qualities.

The star herein, though, is the racial paragon-class for the medusa – this 20-level class gets d10, 6+Int skills per level, proficiency with simple weapons plus longbow, shortbow, rapier, scimitar, shortsword, light armor and their own bite and tail if applicable (i.e. if the character is a greater medusa). The class gets full BAB-progression, good ref and will-saves and the poison of the medusa scales up from 1d3 str to 1d8 str as well as +4 natural armor at 1st level, +2 at 3rd level and every 3 levels after that. Medusa paragon of first level can fascinate foes not in combat within 50 feet by using the hypnotic wriggling of their hair as a standard action, learning to fascinate more adversaries at higher levels, also benefitting from improved reactions to them. And no, not overpowered since it doesn’t work in combat and upon a successful save, the ability stops to function versus that foe for 24 hours. Now if you were underwhelmed by the gaze attack of the base medusa races, you’ll enjoy the fact that petrification gazes vastly improved over the course of the class, gaining an additional use at 7th level and becoming continuous at 10th level. Rather cool, at even higher levels, their gaze can turn mud or quicksand into rock (think about it: vast planes of quicksand, with rocky palaces crafted in a waveless sea of sand), selective gaze (at 16th level) and may even animate the statues that once were the victims of their gaze to fight for them at 18th level – rather cool.

At 3rd level, they also grow to large size and learn to use their hair to manipulate or hold items (leaving hands free for e.g. two-handed large weapons…ouch…) and at 6th level, medusa may extend their hair to grapple foes at range (25 ft. +5/2 levels) – and you’d expect me to scream “OP” here, but the fact that moving or pinning foes is not possible as well as the fact that sunder-attempts versus your hair count as attacks versus you should limit the usability of this ability, though I do get some headaches when thinking about the hair extending from the body counting as part of the character and the potential for attacks on it – clarification on how to resume this/perhaps a scaling mechanic for sundering strands of hair would have gone a long way here – especially since at higher levels, constricting, pulling and even strangling foes garrote-style via hair also are possible and at this point, the range-grappling component, limited though it may be, gets rather complex.

As 2nd level and every 3 levels of the class after that, the medusa also gets one of the medusa talents from 20 talents – these include further ability growth, a bonus feat, blindsense, climb speed, the constrict special quality, may grow wings (and learn to use them as weapons) and learn to tail-slap (which is btw. required for grabbing, constricting etc.) as well as gain stone-related tricks and movement and gazes. The capstone is an outsider transformation, including DR 15/ epic good/evil, depending on alignment – but what about neutral medusa?

We also get a feat for an extra medusa talent and the half-medusa CR+1 template.

Editing and formatting are good, though not perfect, I did notice a couple of minor glitches. Layout adheres to a unique full-color two-column standard with green, scaled borders and the pdf offers neat full-color artworks  -especially cool at this low, fair price-point. The pdf comes fully bookmarked for your convenience.

Author Liz Smith has woven a yarn that ranks very highly indeed, with superb fluff drawing you deep into the race – even if you’re just looking for inspiration for a culture, this serves the role superbly. Crunch-wise, the offering is solid indeed, though the ranged grappling feel a bit problematic depending on your campaign’s power-level. The racial paragon class and the greater medusa both feel a bit like on the strong side of the power-level, with the class allowing you to become a true melee grappling/constricting threat that may rend foes asunder. That being said, I did not consider any part of the crunch herein broken or overpowered per se – the overall combination of them may be a bit much for some campaigns, though. The regular medusa, on the other hand, is completely fine with me and could potentially see uses in all but the most low-powered campaigns. The minor glitches here and there and the slightly high power-level for my tastes and the fact that the range-grappling could use some minor clarification are, however, the only complaints I can muster against this pdf – especially the superb writing offsetting these minor flaws in my book, thus seeing me settle on a final verdict of 4 stars – especially the proper implementation of snake hair and gaze attacks without unhinging the game deserving accolades for the author.

You can get this neat take on Meduas as a playable race here on OBS and here on d20pfsrd.com’s shop!