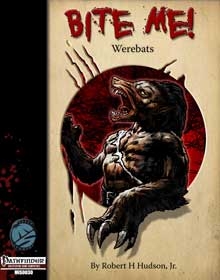 This installment of the Bite Me-series clocks in at 27 pages, 1 page front cover, 1 page editorial, 3 pages of advertisement, 2 pages of SRD (with one page sporting one paragraph of text pertaining char-hooks), leaving us with 20 pages of content, so let’s take a look!

This time around, we take a look at werebats, now reimagined as part of the Bite Me!-series. They get +2 Dex and Con, -2 Int, the two bloods racial feature (making you count as a parent race as well as a shapeshifter for purposes of being affected by effects), low-light vision, +2 to Perception and Fly. Beast Form works is presented in a rather precise wording construct that takes temporary hit points, equipment and the like into account and the odd formatting discrepancies gone – no complaints. In beats or hybrid form, DR 2/silver is gained and increases by +2 every odd level gained to a maximum of DR 10/silver. The werebat gains wolfsbane vulnerability and silver vulnerability. That may just be me, but I am not too keen on wolfsbane as a universal vulnerability for lycanthrope-races; to me, it makes less sense for werebats to be affected by it, but that just as an aside. Regarding beast form and advancement, I do not have significant complaints here…apart from the elephant in the room. We’re talking BATS here, after all, and as such, beast form provides unassisted flight at 1st level, which may present a significant issue for some campaigns and modules, where unassisted flight is generally assumed to be available at around 5th or 6th level. Now I’ve ranted, raved and analyzed the unassisted flight component in detail in various reviews of mine, so let me leave you with this as a caveat emptor warning for GMs and move on. Werebats get their own age, height and weight table, which is nice.

Flavor-wise, werebats make sense to me: Considering the relatively social nature their real life brethren exhibit, expecting a tendency towards the lawful in spite of what outsiders would consider a pretty chaotic commune-structure as the most common social norm, werebats as depicted here are actually pretty comfortable in their hides and environments, which is certainly a relatively intriguing spin on the concept, deviating from the old tropes regarding them. Customization-wise, we receive a total of 7 alternate racial traits for quicker flying, Small werebats and improved social skills. I have an issue with one of these: Cavern Colonist nets a climb speed of 10 feet as well as +8 racial bonus on Climb checks associated with having a climb speed. Stacking with the bonus inherent in climb speed? There wording makes it look like it is. The trait also retains a 30 feet fly speed, regardless of form and fails to note what it replaces. On the plus-side, 3 different subtypes have been created for your convenience using the traits – just one look and there you go.

The pdf also features an array of favored class options covering Core and APG-classes as well as Magus and the UC-classes. In an only aesthetic nitpick, the names of the classes here are usually red and properly bolded – the cleric, oddly, is not red, but black. That’s it and pretty much the definition of a harmless cosmetic hiccup. Rules-wise, however, the section of favored class options provides solid and feasible rules-operations and leaves nothing to be desired.

A massive total of 13 racial feats have been included, though veterans of the series will recognize some of them from previous installments: Primal Form makes a return, as does Hybrid Form, which was curiously absent in some of the installments. Personally, I welcome the inclusion of the two pretty central feats. The feats range from useful to creative: Using Fly instead of Acrobatics or as the skill governing bardic performances, for example, makes sense. blindsense 10 ft. that can be upgraded similarly makes sense and better dogfighting capabilities are appreciated. Improving CMD while flying and increasing maneuverability similarly fall into the utility category. Dazing Shriek and its follow-up feat Fearsome Shriek allow werebats to modulate their blindsense to emit an AoE-daze burst as a move action, allowing them to potentially daze lock enemies. While only available at 6th level and beyond, the lack of a hard cap (or at least cool-down) make me uncomfortable with this feat…which is rather odd, considering that Fearsome Shriek’s debuffing cone does have a hard cap of uses and arguably, is weaker regarding its direct effects, though the lack of a save makes this also pretty hard-core and something I’d personally nerf in my games. Gaining a reflexive 5-foot step after being hit while airborne is really cool and, speaking of which – there is a feat called Feet like Hands which lets you use your feet for fine manipulations, wielding weapons, etc. However, the feat fails to specify how its benefits interact with multiweapon fighting etc. and, as written needs some serious GM work to work. Oh, becoming a disease carrier is also an option.

The pdf features one racial archetype, the thunder child monk, who gains a sonic-damage causing elemental fist that increases in damage output every 5 levels instead of stunning fist. At 4th level, slow fall is replaced with the option expend 2 points of ki to emit blasts of sonic energy that duplicate a sonic based variant of scorching ray. This theme is expanded at 8th level, where a variant of breath of the dragon can be found, 10th level, where discordant blast is unlocked and 14th level, where, for 3 ki, ki shout is unlocked. All of these are supernatural, but come with CL-info as well as concentration info, which is generally nice. I like the visuals of the archetype, in spite of many abilities being spells-in-a-can-style tricks; certainly one of the more evocative and flavorful archetypes in the series.

The pdf also features information pertaining mundane equipment, which includes bomber’s harness, foot shields and delightfully disgusting guano grenades. On the magical item front, a total of 5 items can be found, with carrying nets helping the werebats carry loads while staying aloft, featherlight armor helping with protection while flying. Absolutely glorious: The gastrolith of the hidden hand: Eat a small stone shaped like a finger with a ring on it; you thereafter may vomit forth the ring intentionally (or when really botching saves vs. the nauseated condition), allowing for some pretty cool ring-smuggling. Infusion Collars act as a store option for infusions or extracts of up to 6 3rd level or lower extracts or infusions, which then can be activated via command word. I’m not the biggest fan of such storage items, but for the steep price, I can see it work. Screamer’s Masks, finally, would be sonic-blasts-in-a-can.

The pdf also features a total of 6 new spells: These allow you to conjure forth bat swarms or riding bats, emit a sonic scream that can be hear up to 2 miles away, helping orientation and two mirrored spells that grant a bonus/penalize cavern exploration. An anti-air net of entangling force similarly makes sense.

The two sample characters in this installment would be a werebat paladin at CR 6 and a werebat alchemist at CR 9; the paladin comes with statblocks for all three forms (he has Hybrid Shape), while the alchemist comes with two; both of the NPCs feature, as always, neat artworks and notes on schemes and plots to integrate them easier into an ongoing campaign.

Editing and formatting are very good on a formal level; on a rules-level, there are some minor things that can use a bit of streamlining, but as a whole, the book does a good job. Layout adheres to Misfit Studios’ two-column full-color standard and the pdf features several nice, original full-color artworks. As a nice service, we get a printer-friendly iteration of the pdf and the pdfs are fully bookmarked with nested, detailed bookmarks for your convenience.

Robert H. Hudson Jr.’s werebats are honestly better than I expected; while there is some overlap in the base engine of the race (i.e. it has the same traits as the other Bite Me!-lycanthrope-races with one skill switched), the beast form benefits are pretty solid and while 1st level unassisted flight is something I am very weary of in Pathfinder contexts, as a whole, the presentation here is nice. There are some fun ideas to be found herein and, while flaws exist, as a whole the pdf provides a pretty nice look at werebats. In the end, this is a good pdf of mechanically, but not power-wise conservative designs with a few hiccups. Hence, my final verdict will clock in at 3.5 stars, rounded up to 4 due to in dubio pro reo. If you disallow low-level unassisted flight, these obviously are not for you, though.