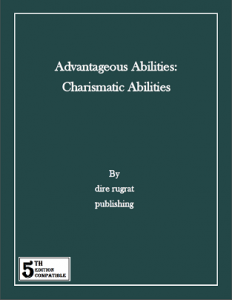 This pdf clocks in at 6 pages, 1 page front cover, 1 page editorial/foreword, 1 page advertisement, 1 page SRD, 1 page back cover, leaving us with 1 page of content, so let’s take a look!

So, what do we get here? In short, we get abilities you can add to specific NPCs to grant them a more unique flavor, some tricks to set them apart, if you will. Distracting Allure, for example, lets you add your Charisma modifier to Dexterity (sleight of hand) checks. As a minor nitpick, rules-language, while functional, is not 100% according to the standards. Additionally, it does imply attraction and lacks a caveat to represent other critters – RAW, it would apply to creatures not attracted to the character like sentient oozes or worse.

Also problematic: Fearful Insinuation allows the character to deliver threats without seeming threatening. If successfully intimidated, the creatures suffers disadvantage on the next attack roll or saving throw…which implies combat use…and no action to activate is given. The ability also lacks a tie to the intimidating character or the mechanics to notice the intimidation while observing it. Another ability nets a reputation so stellar, it requires a hard task, a DC 20 Charisma (persuasion) check to make any creature believe bad things about the target – which is cool…but why is the DC fixed here, when usually DCs of character abilities scale? Where’s the scaling?

Making an ally ignore the frightened condition for Charisma modifier rounds is cool – but where’s the activation action? Does it require one? How many allies can be affected at a given time? being a local celebrity has its perks – but what constitutes a “city” for the purpose of the ability? Similarly, I love the ability that lets a creature move with a grace that renders targets incapacitated on a failed save…I really enjoyed that in the Tangible Tavern from which it’s taken…but as a general ability, it lacks a save. And in the context, it works – the ability was featured by the waitress/maître d’ and makes sense in the context…but can it be used in combat? The ability as presented here does imply the like. Also: No save scaling? There are nice ones here as well, including the means to thwart persuasion. Weird: provoking Words does have a scaling saving throw, making that component of the pdf inconsistent…but hey, I’ll take it. On the downside, once again, I am not sure regarding activation action – sure, a regular action can be assumed, since reactions are their own category here, but some abilities feel like they could/should be bonus actions.

Speaking of reactions: 4 are provided. They lack the “use your reaction”-wording-component. One ability lacks a “to”; getting a Charisma save versus frightened or stunned at a fixed DC ( as opposed to the original DC) feels wonky to me. There is also a short rest healing ability that lacks a range and does not interact with maximum healing based on HD or spells, making it clunky and breaking the hard cap imposed on healing.

Editing and formatting on a formal level are nice, but on a rules-level, we have some serious issues. Layout adheres to Dire Rugrat Press’ two-column b/w-standard and the pdf has neither artworks nor bookmarks, but needs none at this length.

Kelly & Ken Pawlik’s second collection of advantageous abilities suffers unfortunately from the same issues as the first: These abilities are NPC-only, so don’t expect balance-guidance or the like herein. The rules-language employed unfortunately also leaves something to be desired: While the fixed DCs in monster statblocks make sense for the general monster, as soon as you start applying them broadly via generic abilities, there should be differences here. The abilities are intended for mostly humanoid, civilized NPCs, which makes this somewhat odder still. In short – the pdf is less flexible than it should be.

Here’s another issue: The pdf does not really distinguish between passive abilities and those that require actions to use, making how precisely the abilities work, particularly in combat scenarios, opaque. Whether you get anything out of this pdf depends highly on how you want to use its content: As window-dressing-abilities for the GM, this delivers, but I question the value of it as such; the draw of many of these did stem from the characters to which they were assigned and the social context from which they originated. In that context, they make sense. In a general pdf, divorced from their context, their rules fall apart and render this significantly less useful than I hoped it would be.

My gripes for the first pdf in the series persist here and, if anything, are exacerbated by the relatively loose framework of combat/social interaction of 5e; particularly in such contexts, it is important to know when an ability can be used and how, drawing clean and concise lines in the proverbial sand of rules-language. As written, in spite of the low price, I cannot go higher than 2.5 stars, rounded down for this one.

You can get these abilities here on OBS!