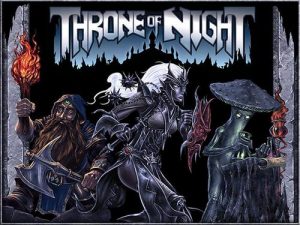 It’s been 7 years on the day, so since this has been asked time and again:

I will not review Throne of Night’s first two modules.

No idea what that is? Well, at one point, out of nowhere, an author called Gary McBride, talented and creative, came – he penned a phenomenal evil AP that holds up really well, and that met with nigh-universal acclaim and love. Way of the Wicked is an incredibly good campaign, and the author quickly became popular among fans and publishers. Heck, he also contributed to the excellent adventure anthology Heart of the Razor, released by Frog God Games.

His second AP was to be Throne of Night – a kingdom-building saga beneath the earth, with dwarves and drow as playable races/angles. Ambitious and weird, pretty much everybody was stoked. The kickstarter ran rather well, and I threw almost $150 at it. Because I wanted the books in print. Well, after one expansion for Way of the Wicked and the first two books, something happened.

We won’t know what, as the author has gone incommunicado on all fronts; no more books or pdfs were delivered, and it’s been 7 years.

Suffice to say, the backers, me included, are not happy, and the awesome artist (not going to name him, as I’m sure he wants to put this association behind him) was cut from the once two-people company as well. I have no hope that Throne of Night will ever be finished in an official capacity, now that D&D 5e and PF2 have replaced PF1 as the current editions played by many people.

If you want a more detailed account on the sordid story, the Quasar Knight has covered it in a pretty detailed blog post, linked here.

But there are two good things that emerged from this chaos, at least for me, two things that allowed me to experience the sense of catharsis to move forward:

First of all, there would be “kevin_video” Derek Blakely’s tireless efforts. This man singularly scoured the web for artworks, contacted people and continued to champion a release, in some capacity, even offering free work. Moreover, he has single-handedly written a metric TON of material for Throne of Night, as based on the information he managed to piece together. This is, as far as I’m concerned, awesome.

You can find his work here! And if you enjoy it, do leave him a tip via his kofi, all right? A fan designing a metric ton of encounters for an abandoned product? awesome.

Secondly, my brain had already thought up a lot of underworld material for my homegame; in many ways, the campaign seeded my imagination – and as a form of catharsis, I jumped immediately at the chance of contributing to AAW Games’ fantastic Rise of the Drow mega-adventure’s expanded version. Now, the original version of RotD was excellent. And, you know, it was already done and delivered, because AAW Games delivers.

This expanded version? From its layout to the overall production values to the vast subterranean sandbox, this mega-tome is such a benchmark as far as I’m concerned, that I literally can’t picture even a finished Throne of Night holding a candle to it. And I’m not saying that due to my meager contributions to this tome. If you want a truly exemplary underdark campaign, look no further than this. Even the previous iteration mopped the floor with the competition; this new version? It is on a whole different level.

So yeah, Derek’s work finds a home in Rise of the Drow for me; and Throne of Night? It remains a sad tale of a talented individual not buckling up and sharing his woes of someone losing an unprecedented amount of goodwill.

May the Throne of Night rest in peace – and may this post and the excellent work of Derek Blakely, and Rise of the Drow bring you the same closure.

As always, if you can spare a buck or two, I’d appreciate any contribution you can make via donation or patreon. Thank you.