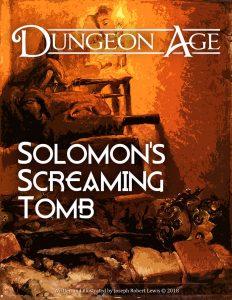 This module clocks in at 43 pages, 1 page front cover, 2 pages of introduction/editorial/SRD, leaving us with 40 pages of content, so let’s take a look!

Okay, so this module is situated in a desert area, and it is intended for a party of characters ranging from levels 5 to 7. I’d suggest the usual 4-6. A general overview map of the region is provided (sans scale), but on a plus-side, the module does come with…(mostly) player-friendly maps! The 9 rooms of the tomb all get their own one-page versions, sport grids, but no scale, and an overview map is also provided for the GM. While labels are on the maps, in several cases, the letters are outside the maps, and can be cut off – this, however, doesn’t extend to all maps.

The information-design of the module is pretty good, though: We do get read-aloud text, which is generally well-written, and the support extends to dialogues with NPCs – helpful and neat. Below those sections, we have bullet points. Monsters also come with descriptions – a nice touch.

Now, this was an early offering of the author, and it does show – though the author has improved the book: Originally, the module was missing proper statblocks, providing only abbreviated versions. This has since then been remedied (KUDOS!) – we get full stats for the creatures encountered. On the downside, the statblock formatting could make a clearer distinction between the statblock and passive feature-section, particularly since the passive features (such as Keen Hearing and Smell), while properly bolded, don’t have their names in proper italics. Still: Better formatting than many instances I’ve seen. On the formatting-side, “Hit:” should be in italics: “Hit:” to make parsing faster. Anyhow, beyond these, we have some average damage values being slightly off: 3d6+3 should e.g. be 13, not 12. Skills are also not always correct. One part of the final boss is missing its poison damage immunity that the entire being has. More grating, no HD-values are provided – only HP-values are included. So yeah, while we now have stats, they aren’t exactly anywhere close to perfect.

On the plus side, the module does quite a bit right: We get some rather neat setups: There are two NPCs – young thief Layla, and the wizard Azzan, are investigating the tomb (looking for missing mentors both), and the PCs can compete with them, cast their lots with them, etc. – or, well, a deaf cobbler found in a dangerous oasis might also provide a hint. In short: The hooks are rather detailed.

Trekking through the desert also provides some sample hazards, and did I mention the trap-like things lurking in the sands, the sabercats or dune rays? This module manages to establish a fantastic, yet gritty atmosphere from the get-go. A plus: The book has a great reason for not allowing for rest-scumming: It, well, screams. Kudos for that!

The deaf cobbler also introduces a bit of humor…but yeah, in order to explain more, I’ll need to go into SPOILERS. Potential players should jump ahead to the conclusion.

So, the module is per se a straight-forward tomb-exploration: If the party talks to the wizard Azzan Wadi making camp near the tomb, he’ll tell the PCs that his mentor first dealt with the first instance of the tomb screaming, but lost his life doing so. You see, years past, a master thief (the mentor of Layla) entered the tomb and inadvertently-crashed through it, opening a passage to the Dolorous Ichor – a black slime-thing, which is emitting the screams, seeking to lure new prey. The PCs thus have the global effects on the tomb aligned with this antagonist – the black ooze can also animate ichor warriors, which are HARD to kill. There are multiple entries to the tomb (official route or the thief’s), and random encounters with howling (non-undead) ghuuls are also part of the deal. Exploring the tomb, the PCs can meet Layla, and magical monsters (which can affect you with a sight-hampering growth of spider-eyes, thankfully temporary!), spiders with piercing glass webs and the like – some really cool stuff is here. The detail is also neat: The book provides e.g. a whole array of information for speak with dead, and risk/reward ratios are neat: Sure, the NPCs are helpful, but they do have their own agendas…Layla will, for example, not stand for the PCs trying to take her erstwhile mentor’s gear.

Oh, and there’s a surprise waiting: the missing master Barnabas is actually alive – in a way. He’s sealed in amber, as his spell seems to have gone awry…and powerful magic may restore him. Oh, and then, there’s this white, aggressive arm extending from the wall – it belongs to a massive fiend trapped here, who has a deal: Let it eat a limb, and the character gains power. This forever eliminates the limb, but grants an increase of +2 to Constitution, advantage on death saves, resistance to fire, cold and poison damage, darkvision of 60 ft., and the ability to read and write Infernal. Okay, how does that influence spellcasting? How does losing a leg influence the character? What about multi-limbed races, after all, there are plenty of those available for 5e? This is a solid idea, but its execution is lackluster.

Editing and formatting are okay; on a rules-language level, the book suffers from its deviations from the standards, and on a formal level, the irreverent and well-wrought writing contrasts with some typos – my favorite being the “data palm.” Artworks and cartography are hand-made and functional. I strongly recommend printing the adventure, for the pdf has no bookmarks. Boo! The module comes with a second, low-res version for mobile devices.

Joseph Robert Lewis’ excursion into the screaming tomb is an early offering, and it shows; it is an attempt at executing a straight-forward dungeon crawl in 5e, and frankly, I liked it much more than I should have. It has some replay value, and the wealth of weird creatures features, the global effects and details – this shows love and a distinct voice. While it is not as inspired as his usual work, the module still has fun to offer, provided you can look past the formatting issues. Particularly due to its more than fair $1.00 asking price, this is worth checking out if you’re looking for a solid dungeon. It has flaws, but it also has a couple of nifty ideas.

That being said, I’d recommend the author’s other work, like the brilliant Saving Saxham, over this any day of the week. My final verdict for the screaming tomb can’t exceed 3.5 stars, rounded down.

You can get this adventure for a single buck here on OBS!

If you haven’t already: Download Saving Saxham for PWYW right here, and leave the author a proper tip. The module is worth it!

If you can, I’d appreciate any donation you can make, or joining my patreon. Thank you.