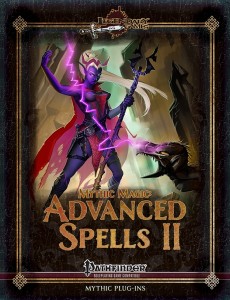 This installment of the Mythic Magic-series clocks in at 30 pages, 1 page front cover, 1 page editorial, 1 page SRD, 2 pages ToC, 2 pages of introduction, 2 pages of advertisement, 1 page back cover, leaving us with 20 pages of content, so let’s take a look!

All right, so, unsurprisingly, this installment of mythic magic once again provides mythic versions for all spells contained within one of Paizo’s big hardcovers, this time around the Advanced Races Guide. If the spell is not in the original Mythic Adventures hardcover, rest assured it can be found herein. Now if you’re a regular follower of my reviews, you’ll know that I consider the ARG a disaster balance-wise, but that thankfully has no bearing on the spells therein and their mythic equivalents, so let’s take a look!

As per the standard of this series, we kick off with a list of the mythic spells contained herein in an alphabetical spell-list – as a selection of different spells from a racial book, we actually have mythic spells take a pretty cool turn in that they provide interaction with the abilities of monsters – take the first one Aboleth’s Lung, which may be not only augmented to provide swim speed, but also ignore the effects of aboleth mucus? Or Ironbeard, which can be made much more potent both in its defensive and offensive capacities?

No on more of a craftsmanship’s perspective, one could for example take a look at Gusting Sphere, which not only has the save changed from negates to half and increased damage, but also adds bull rush and the augment option to affect all creatures in range – yes, this may not be a unique effect, but it radically changes the parameters of an otherwise pretty subpar spell into something different and more versatile – and I’m definitely game for that! Half-blood extraction can be an unpleasant spell regarding its in-game ramifications – the reduced costs via mythic tier and, per augment, mythic power, do offer an interesting point, though: Think of truebloods waging war on the half-bloods/vice-versa; Tales of Symphonia, anyone?

The resistance/immunity-ignoring hellmouth lash is also a pretty nifty version that surpasses the original. Of course, modifications of action economy can be found herein as well, as are mythic power-fueled condition worsening and rendering ghost wolves incorporeal without inconveniencing the rider and e.g. relatively boring damage spells that receive an upgrade via enforcing a miss chance on those hit. On the interesting side, one can also definitely mention fearsome duplicate, which has your ability to maintain it in spite of damage etc. increased for an uncommon, defensive improvement

Speaking of uncommon interactions – linebreaker. That one lets your ally charge through difficult terrain and if the target creature is mythic, it can use its own mythic power to execute a combat maneuver when charging and yes, the potency is greater when cast on yourself. This synergy/combo-potential. Miasmatic mist’s sight-blocking new qualities also make for a rather cool tricks. Allowing sacred spaces to be enhanced with light effects, including a potentially dazzling daylight-effect also makes for a thematically fitting enhancement. Speaking through Sentry Skulls (thankfully minus casting/item activation) may be nice, but is not even close to sow thought. This one’s mythic version is pretty much an inspiring campaign seed waiting to happen – why? Because it offers a way to make the thoughts you sow contagious, potentially allowing for a module of propaganda warfare and similar uncommon ideas – politics-storylines just got yet another nifty trick to spring upon PCs…

Now not all of the spells reach this abject level of awesome, with e.g. truespeak only netting an additional bonus to cha-based checks due to linguistic familiarity and pleasing diction and a slight DC-increase for language-based tricks, but I guess they can’t all be awesome. Sharing and changing the effects of Ward of the Season fluidly makes for another module waiting to happen – if you require an idea there, just drop me a line!

Editing and formatting are generally pretty good, though not perfect: I noticed a couple of typo-level/formatting glitches like e.g. fire trail being once referred to as fie tail. Layout adheres to Legendary Games’ two-column full color standard with neat artworks in full color. The pdf comes fully bookmarked, oddly once again with a couple of faulty bookmarks before the proper ones – 4 spells, out of order. They don’t impede functionality, though, so no biggie. The pdf comes extensively hyperlinked, with each spell pointing towards its non-mythic version on d20pfsrd.com.

Jason Nelson’s latest mythic magic-installment once again can be called a non-optional book. If you use ARG’s spells in your mythic campaign, you quite frankly need these. Now while there are some straight, relative solid mechanical progressions versions that indulge in number/power-escalation, the mythic versions herein usually tend to also sport one or two different tactical options – numerical bonuses are boring and these spells, even if they go for that route, tend to add an interesting component to the fray. And then there are the downright inspired ones with combo potential, unique benefits and cool synergies. While not perfect, I always tend to reward creativity and inspired ideas over minor issues – and this book sports that in spades, more so than the mythic magic installment that converted Ultimate Magic. That being said, there are a couple of not so awesome spells herein and the pdf feels slightly, by a margin, less versatile in its takes than the advanced spells-take on the APG, thus missing my seal by a teeny, tiny margin that should not keep you from getting this cool pdf. Final verdict? 5 stars.

You can get this non-optional collection of mythic spells here on OBS and here on d20pfsrd.com’s shop!