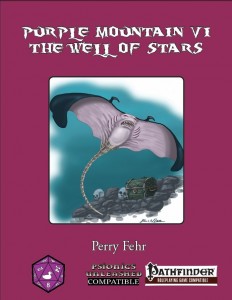 The sixth installment of Purple Duck Games superb Dungeon-module-series clocks in at 46 pages, 1 page front cover, 1 page editorial, 2 pages of SRD, leaving us with 42 pages of content, so let’s take a look, shall we?

As always, this module can be run as stand-alone or as a continuation from the continuously SUPERB last levels of Purple Mountain – also providing information for including this in PDG’s Porphyra-setting. The pdf kicks off with a conflict – the PCs may endeavor to save some undines from derro aggressors, which include kineticists. Yes, this module is fully compatible with and makes use of Ultimate Psionics. Awesome! The undine princess Glubela then tells the PCs about being on a mission to the eponymous well of stars to take a mallet of the titans to a young kraken to bring down the cavern on the beast’s head. Here is where the module turns uncommon – via the new helms of lesser underwater action, the PCs will have 72 hours beneath the waves before the helms deactivate – so yes, there is a timer on this beast of a module.

Braving psionic crysmals and diving into the depths of the well, we are once again shown how dungeons (and the underworld per se) ought to be: 3-dimensional. The palpable sense of doom when going underwater is fun to watch on the faces of just about any player…at least to me. Suffused beneath the waves lies a labyrinth of quartz and geode-littered wholly submerged tunnels sporting unique creatures like gemstone kapoacinths concealed as crystalline cysts. In the flooded tunnels, aquatic dark creepers, stalkers and slayers loom and the PCs will have to traverse a watery vortex, brave kelpies and crab swarms as well as crystalline ID oozes, amphibious, potion-brewing cloakers (and twisted halfbreeds – creepy!) – speaking of creepy: Of course the underworld tunnels also contains an aboleth mastermind – who also happens to be the master of said Undine princess.

Whether her betrayal turns things ugly or not depends among other things on how well they could handle all the aforementioned threats, whether they have been gullible and how they could e.g. deal with ulat-kini slime-herders, skum and finally, the psionic aboleth. In the aftermath, the PCs may well have an orb of dragonkind (dragonturtle) – which bodes well for future installments of the series! (Riding a dragon turtle into battle is 7 types of awesome…)

The pdf also comes with an extensive DM-cheat-sheet for underwater adventuring and also battle strategies for the respective characters as well as 5 magic items. Finally, we even get lists of XP by room, creature and a list of treasure/value/room-breakdown of the module, which also includes some solid trouble-shooting advice regarding aforementioned mallet.

Editing and formatting are top-notch, I didn’t notice any significant glitches. The pdf comes fully bookmarked with nested bookmarks for your convenience and also provides player-friendly (and MD-keyed) high-res .jpg-versions of the full color maps. The full color artwork ranges from cool to okay and the printer-friendly 2-column layout makes printing rather easy.

Purple Mountain is one of the most underrated series currently produced for Pathfinder by 3pps and I stand by that. Ever since the series has truly hit its stride with level 3, each and every level has provided joy galore to me – but this also means that this module had a tough legacy to live up to. I am happy to say it does live up to it – author Perry Fehr has crafted a thoroughly distinct underwater module with weird societies and strange customs. He uses his biggest strengths as an author to create believable, yet fantastic cultures and marries them with some decidedly high-concept ideas that make what otherwise would be a *relatively* straight-forward premise a thoroughly enjoyable romp.

There aren’t many good aquatic modules out there and this one will not only cater to fans of Purple Mountain, but also provide fodder for adventure-starved psionics-advocates. It also would, with some minor work (mostly depth tolerance/buoyancy) make for a great module to put into the regions of Cerulean Sea’s Azure Abyss. By the way: Waves of Thought, the psionic supplement for Cerulean Seas, would make for a superb collection of material with which an enterprising DM could further enhance a great module into an unforgettable one.

So yeah, in case you haven’t noticed – I really enjoyed this sojourn through maddening depths, crystal-laced tunnels and habitations of things from beneath the waves. My final verdict will clock in at 5 stars + seal of approval.

You can get this neat underwater module here on OBS and here on d20pfsrd.com’s shop!