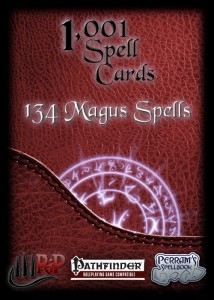 So this time we’ll once again do something completely different – let’s take a look at Rite Publishing’s Spell Card deck for the Magus! First of all – from where are these drawn? Well, know the magical magnum opus, the spellbook to end all spellbooks, 1001 spells? If not, then… I don’t know. It’s a superb tome that actually contains 1010 spells, but oh well.

Back to the deck – here we get the magus spells from that book, conveniently printed on nice US-Poker-sized cards. In the upper right corner, we get the respective spell’s level. The upper third of the card contains the spell’s header, whereas the lower 2/3rds contain the spell’s text. The cards are also color-coded for your convenience – transmutation-cards get a green background, divinations are blue, evocations are orange, conjurations yellow, enchantments purple, abjurations brown, illusions grey and, of course, necromancy spells are black.

One basic issue of the spell card formula would be the wildly diverging length of spell-texts – o how do these cards handle it? Well, very few of them feature part of the text on the backside and minor downscaling in font size also help most of the texts fit. Generally, the respective spell-texts work well i the context of the cards, though some cards thus look a bit cluttered. It should be noted that “tables” like the one x-ray vision has for different materials and thickness to see through generally works well, though the respective words could be slightly better aligned below each other.

Editing and formatting of these cards is great, they can easily be used and the color-coding + spell-levels make using them rather fast in game. If you’re looking for spell-cards, these do a damn good job and my dead tree version did show that they work fast. That being said, some (less than 10 of them) seem to have not been 100% perfectly centered and feel very slightly slanted, but that’s an issue of the printer, not the publisher. One slight pity would be that some cards had to include text on the back – if you as a DM want to use a kind of “draw-random-spell-lottery”, these might somewhat be problematic. Then again, these constitute less than 5% of the total cards.

The spells are awesome, the cards simple, clear in layout and functional and the deck overall is nice, if perhaps not the absolutely perfect design. Personally, I would have preferred slightly more pronounced, stronger colors, but all in all, that’s not enough to rate this down. These cards can be a nice addition to your game if you like spellcards. If you don’t these won’t convert you, though players looking for a handy way to get all these magus-spells in one fell swoop, should definitely get these. My final rating will clock in at 4.5 stars, rounded down to 4 for the purpose of this platform.

You can get these handy spells/spell cards here on OBS and here on d20pfsrd.com’s shop!