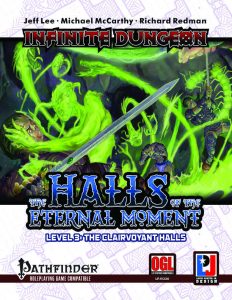 The third level of the Halls of the Eternal Moment clocks in at 15 pages, 1 page front cover, 1 page editorial/SRD, 1 page advertisement, leaving us with 12 pages of content, so let’s take a look!

So, as in the levels before, we get a concise summary of the properties of the dungeon regarding its walls, lighting etc. However, we do get a cool unique dungeon feature – within these walls, you can find columns made of skulls – and inside the skulls are eyeballs that twitch, unless they are actually observing someone – in which case they become eerily still and staring. Oh, and guess what: The theme of the dungeon FINALLY comes into play. While the header of “Temporal Fluctuation” has not been properly formatted, there is a 1 in 8 chance per room (same for random encounters, 3 are provided) that a fluctuation begins: A total of 5 entries can be found – +1 initiative, -1 atk and Ref-saves (this one, annoyingly, makes up 2 entries in a 5-entry-table – why duplicate them??), -4 to Perception and +4 to critical confirmation rolls. …yeah, I kinda expected something cooler as well.

Anyways, as the write-ups of the monsters show, there is a leitmotif here – namely sight or lack thereof – the undead are beheaded and blind and isitoqs are included as well.

…and that is as far as I can go without delving into major SPOILERS. Potential players should jump to the conclusion.

All right, only GMs around? Great! So, first of all: After two levels sans a unique boss, guess what we get? Bingo, a cool and actually really creepy villain, namely Illquis of the Thousand Eyes, a nasty derro necromancer. While the statblock isn’t perfect, it’s good enough for most…and the derro can actually see through the ocular columns throughout the level, as per clairvoyance (nor properly italicized). This allows an even halfway competent GM to instill a surprising sense of paranoia and eerie creepiness. The resting restrictions of the previous levels, just fyi, are gone…and indeed, paradoxically, the level may actually end up being easier on the PCs than previous ones: For one, the necromancer creates headless zombies, beheaded and isitoqs as primary minions – all of which have in common that their CR is really low. Similarly, even blind beheaded swarms may be taken out with relative ease. While a gray ooze makes for a nasty challenge, the primary combat antagonist here is clearly the derro.

That being said, the traps featured this time around are significantly more interesting than those on the last level, with a vertigo trap or a charnel pit that has been granted limited, churning animation – particularly the latter represents the strongest trap in the series so far. More so than the mechanical challenges, this level excels beyond level 1 or 2 in the respective rooms – “The walls and ceiling of this room are festooned with braids, ropes and nets, all clumsily woven from what appears to be humanoid hair. The room’s two doors are decorated with wreaths crafted of the same material.“ That is CREEPY. The whole level, with its theme and leitmotif, manages to instill a more unique and interesting atmosphere.

Now, as for the maps – they are still bare-bones; player maps have not had secret rooms redacted and GM maps lack the secret room notes. Similarly, the lack of most terrain features, even in icon form, on the maps means that a GM has to do some work on them. This is not a go-play module.

Editing and formatting re good, but weaker than in previous installments – I noticed a couple of minor hiccups, some pertaining rules-relevant material. Layout adheres to the nice two-column full-color standard of the series. Artwork is stock and has nothing to do with the material herein. The pdf comes fully bookmarked for your convenience. The cartography still remains a big downside of this series.

Jeff Lee, with additional writing by Michael McCarthy, Rich Redman and Louis Porter Jr., finally delivers on the promise of this complex, at least in part. While I wasn’t exactly blown away by the temporal effects, they at least provide a unique descriptive angle for the GM. The fully statted boss and the leitmotif of this level are the stars, though: While mechanically less challenging than the wars of attrition that were level #1 and #2, this level feels, paradoxically, rather tame – particularly when considering level #1’s at times hyper-deadly traps. Mechanically, this is not the most impressive level herein.

However, it’s the first level that reaches the level of originality and flavor I expected from the series: The writing, always a strong suit for the series, is tight in this one; the flavorful rooms and creatures encountered are unique and horrifying and the paranoia an even moderately competent GM should be able to elicit here is just FUN.

While surprisingly easy (apart from the boss), the dungeon level is interesting, flavorful and cool. That being said, editing isn’t as tight here and, as mentioned an abundant number of times, the maps are puzzling in how inconsiderate they are. Still, the writing and unique theme of this level make it worthwhile – though the formal hiccups, alas, make it impossible for me to round up from my final verdict of 3.5 stars.

You can get 4 levels of the Halls of the Eternal moment here on OBS.