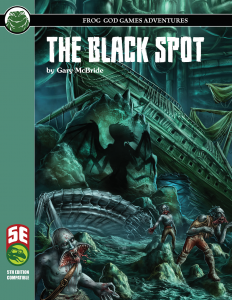 Okay, so I believe I need to provide at least a brief history lesson: This module was originally penned as part of the epic project of the Frog God Games crew, Lou Agresta, and several other talented people saving a notorious piece of vaporware, namely Nick Logue’s magnum opus Razor Coast, from oblivion; this module was originally part of the “Heart of the Razor” hardcover, which I do own – that supplemental book featured some amazing stand-alone adventures that can be added to Razor Coast. Anyhow, back then, the original author of this module Gary McBride was riding high, providing several downright fantastic adventures, most notably the Way of the Wicked AP. While the author at one point went incommunicado over the KS for his second AP, and wasted a lot of goodwill, I am not going to penalize this book for that. It is my policy to rate the work, not the author. It should also be noted that the author was not per se responsible for the 5e-version:  Patrick Pilgrim and Edwin Nagy handled this, so if you wanted to see me slam this unjustly, I’ll have to disappoint you. I care about the module, and it wouldn’t be fair to the crew that worked hard on this conversion to penalize them from wrongdoings they had no hand in. (And yes, I am one of the people Gary McBride scammed out of more than $140…) So yeah, this review? It’s about this module, not some drama beyond it, and the people working on this conversion deserve a fair shake.

Okay, got that? Great! While nominally set in the Razor Coast region of the Lost Lands campaign setting, this module for 4 to 6 5th-level characters is very easy to adapt to pretty much any marine environment – you just need the PCs to board “The Sealord’s Blessing” under Captain Colthyn Riggs. Thematically, the module is probably best described as dark fantasy, and it certainly can be considered to be somewhat old-school – the adventure is not particularly easy, so a well-rounded group is certainly recommended. The module does reward clever and thorough players. The module does feature a few rumors for PCs doing their legwork, and does come with read-aloud text. Vehicles and NPCs are properly statted, and deserve applause for the conversion crew: The statblock integrity is very high as a whole – not perfect (mustard jelly should, for example, have d10 HD as a Large creature, not d8s), but as a whole, formatting etc. is well executed. Often forgotten aspects such as damage thresholds, vehicle stats, etc. are provided, and the creatures not only get proper features, we also make use of lair actions. While e.g. the murder crow once erroneously refers to itself as Lord of Crows, the stats, as a whole, work as written. In short: Among the flood of bad or sloppy 5e-conversions, this stands out as a job well, if not perfectly done, and was obviously done with love for the rules and care.

The module includes a whole page of troubleshooting advice for the GM. Kudos for that!

All right, only GMs around? Great! So, the PCs are on board of “The Sealord’s Blessing”, and they’ll happen upon “The Flying Fortune” – a ship that ran aground the rock-formation known as Trident – three lances of rock protruding from the waves. The ship’s impaled wreck hangs precariously on the massive rock formation, so exploring the vessel with the captain would be the first section of the module. The aforementioned, diverse monsters add a lot of flavor to this section – and clever PCs can find out that their very captain, well coincidentally also was the man in charge of this vessel.

Before you groan or whip out your “Curse you and your obvious and inevitable betrayal”-memes, wait for a second. Using a NPC ally to betray the characters is a risky gambit, for most groups will be paranoid and clever. Many a module gets this wrong, and fails to account for the party’s capabilities – this one is more clever, and the reason for that lies in the eponymous black spot, which has another meaning than the one you’d expect from the literary context.

You see, there is this huge vertical chimney in the middle of the trident, and navigating down its vast length, there is something strange, deadly and horrifying: The vessel of a mi-go is waiting below the trident, accessible this way; the master of the ship, “The Engineer” is actually the mastermind behind the captain’s insistence of getting the party below, and betraying them, for he has been infected with a biomechanic horror, the black leech – the true source of the Black Spot he hides under his gloves. The engineer’s command: “Bring more!”; it’s not the captain who is lying or making evasions – it is the entity pulling his strings.

After the literal and figurative descent below, the second part of the module deals with the party exploring the sunken space-vessel of the engineer, exploring deadly gardens, finding strange portals, and it makes sense: The Engineer comes with added notes to allow the GM to play it properly, and from nonlethal traps (need the party alive to properly experiment on them, after all!) to the overall layout and the Engineer’s cool lair actions, everything makes sense. Oh, and defeating the engineer initiates a self-destruct sequence, so the escape from the trident will be rather tense as well! Regarding engineer: There is one thing you need to know, that struck me as odd: You see, in the PFRPG-version, the Engineer is a neh-thalggu, a species known as brain collectors. While mi-go fit the deal, there are a few references to “brain collector” remaining – but these could theoretically just be descriptions of, well, what the mi-go does, so no problem there. What I did consider to be an issue in a way, though: The map of the ship has this huge “The Neh-Thalggu Craft”-header, which might cause some confusion with GMs not familiar with the genesis of the module.

Whether or not the captain survives his ordeal and can be healed of his parasite remains up to the party, and there is a suitable denouement provided.

Editing and formatting are very good on both a formal and rules-language level – the book almost achieves the highest honors in both categories. Layout adheres to a two-column full-color standard, with really nice full-color artworks provided. The pdf comes fully bookmarked, making navigation simple and convenient. Cartography remains my most pronounced issue with this book: The maps are full-color and neat, but no player-friendly versions are provided – the aforementioned header-glitch is purely aesthetic, but the absence of player-friendly maps is somewhat unpleasant.

Patrick Pilgrim and Edwin Nagy did a very good job at converting Gary McBride’s adventure – they retained the difficulty and themes, while taking 5e’s options and system-relevant components into account. This is a well-wrought, atmospheric adventure; it’s tough, but fair. It’s clever. Were it not for the lack of player-friendly maps, this’d be a 5 star-adventure. As presented, it is still worth 4.5 stars, rounded down. If you want a dark, marine yarn, this one most assuredly delivers!

There also is a OSR-version for Swords & Wizardry, which can be found here – I don’t own it, so I can’t comment on it.

The original Heart of the Razor-anthology for PFRPG can be found here!