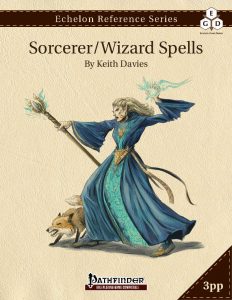 First things first: This review is based primarily on the version that takes 3pp-options as well as PRD-spells into account; for a link to the PRD-only version, see the bottom of my review on my homepage.

This COLOSSAL reference tome clocks in at 1176 pages. Let that sink in. 1 page front cover, 1 page editorial, 1 page ToC, 1 page blank, 12 pages of SRD, 1 page back cover, leaving us with a ridiculous 1159 pages of content. It should be noted that the pdf sports a 37 pages strong index; this index not only lists the spells alphabetically, it also sports hyperlinks, allowing you to jump directly to the spell in question – a comfort function I thoroughly enjoy.

Now, as always, you should be aware that this book is a reference tome – it compiles information. As such, I am not going to be judging the quality of the content collected; instead, I am focusing on presentation, formatting, convenience and the sheer functionality of this massive tome.

After a brief recap of the rules governing sorcerer, wizard and arcanist spellcasting, we begin with the respective spell-lists; Spells are presented first by spell level: You get all spells grouped by spell-level, starting at 0-level spells, moving up to 9th. Within each spell level’s, the spells are grouped by school, with schools presented in alphabetic sequence. Within each school, the respective spells are then presented in alphabetic sequence as well.

Since a book of this size sporting a unified listing of spells with their full spell text would make no sense whatsoever, the full versions of the spells are instead grouped by spell-level: First, we get all 0-level spells, then all 1st-level spells, etc. Within each section, the respective spells are once again organized alphabetically.

A huge plus here would be btw. how the book handles redundancy: If there is more than one spell of the respective spell’s name, both are listed, with short-hand pointers towards the source. This does allow you the freedom of choice, if in doubt.

A minor complaint here: As is unavoidable in such a colossal accumulation of data, there are bound to be minor hiccups; the fact that I did not notice A LOT of them speaks volumes of the diligent work ethic of Keith Davies; however, there is e.g. a reference in the BoLS-version of encrypt to a decrypt spell that I could not find; on the plus side, both of Rite Publishing’s takes on the encrypt/decrypt-concept can be found herein, so yeah.

On the plus-side, know how I noticed that? The hyperlink that pointed from the BoLS version of encrypt was missing. So yes, the spells, when interacting with others, are hyperlinked among each other! That is a huge comfort boost. It should be noted that hyperlinks have not been added in a sloppy manner; when a spell, for example, references a spell-group like summon monster, it is not hyperlinked, showing awareness of rules that an automated process would not be capable of replicating. Some spell texts include their own name more than once – in such a case, one can find, here and there, a bit of an inconsistency: Sometimes, the spell’s name is hyperlinked to itself and sometimes it isn’t; now, I don’t require that a spell references back to itself, but it is something I noticed. Still, this is only an aesthetic complaint and will not influence the final verdict since it does not impede the functionality of this reference tome.

Beyond the classic spells we come to expect, there are some true gems from the 3pp circuit within this book. Whip of spiders. Fusing of Bones. Just sayin’. Need an idea of what can be found? Well, we have material from Rite Publishing, Rogue Genius Games, e.g. cursed gift from Kobold Press’ Northlands book, a mass of Dreadfox Games-spells and much, much more.

It should btw. be noted that there is a content curation process involved in the selection – e.g. setting-specific spells or those that work different from comparable spells have not necessarily be included; so, while there is more than one spell that can e.g. decrease the hardness of an object, I do have a LOT more versions of the spell than the ones found herein, including versions taken from sources employed in the compilation of the book. In the couple of cases where I went through the hassle of checking such spell iterations against the ones that have made their way into this book, I ended up finding the choices made regarding inclusion of the spells to be sensible.

Editing and formatting are very good; particularly considering the vastness of this colossal tome, the diligence that went into this tome and its streamlined organizational paradigm is impressive. Layout, as always for the Echelon Reference Series, is subservient to functionality – you won’t find swirly patterns or the like within; instead, the minimalistic graphical elements are just here to make the reading experience more streamlined. There is a certain elegance in that minimalism, though; having just read a couple of adventures that basically were word-docs crammed into pdfs, the difference is pretty evident – there is a methodology behind the presentation and one that does its job right. Now, the bookmarks a bit less detailed than what I would have liked to see – we only get bookmarks for the header of the respective spell-level presentation. That being said, bookmarks to each and every spell would have made no sense, particularly considering the presence of the copious amount of hyperlinks. In short: The pdf’s solution to the issue of organization is actually more efficient than a reliance on bookmarks would have been – so no complaints in that regard.

Know what I frickin’ LOATHE? Compiling spell books. I love spells, don’t get me wrong. Reading a good spell has, more than once, inspired me to write a whole adventure. That being said, particularly when it comes to random encounters and non-bosses, wizards are a ton of work for next to no pay-off; unless used as the BBEG, you compile a spellbook, only to have the wizard cast perhaps 2 – 3 spells before being cut down.

Honestly, this was as much a factor as personal preference in developing my own design aesthetics: In my games, spell books are often grimoires; named tomes that can drive you insane, jealously guarded by their keepers; random wizards often conveniently lose their spellbooks, rig them with self-destruct sequences or employ codes to encrypt them – thus I can see whether my players are intrigued enough to invest the time trying to decode the book. If they are interested, I bite the bullet, open, sans hyperbole, at least 30 pdfs and begin compiling. And yes, my roleplaying pdf folder is that big. In total it encompasses over 170 gb worth of pdfs, a significant part of which are for PFRPG.

The plus-side here is that my spellbooks often end up being rather unique and flavorful; the downside is that I frankly have a dearth of disposable grunt/mid-level wizard NPCs in my games; I end up using sorcerers much more often, since they’re not as big of a hassle.

This book is a perfect and rather convenient way to speed up the process. The content curation that was employed herein does make sure that there are not utterly balls to the wall insane spells, nothing too culturally/setting specialized and fancy within; instead, this book basically acts as the massive one-click-done tome to reference more common spells; for specialists, you’re bound to know where to look anyway. (“That weird crystal mage…yeah, gonna check the crystal magic book…”) This book, in short, has provided a significant boost to how quickly I can generate spellbooks and for that alone, this is worth its asking price.

Beyond that, it probably represents one of the best ways to start your own massive array of spells. If I was a wizard/sorcerer-player and had few or next to no books – well, this is probably the single largest, most exhaustive tome on the subject matter of spells for your class that you’ll be able to find. EVER.

Is this book perfect? No, but then again, no book of this size can hope to be; however, it is an extremely convenient and helpful tool for GMs and players alike. As such, my final verdict will clock in at 5 stars + seal of approval.

You can get this colossal compilation here on OBS!

You can get the PRD-only version here on OBS!