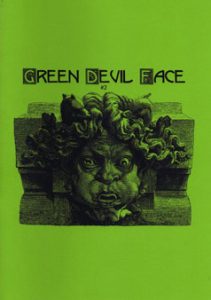 The second installment of the Green Devil Face e-zine clocks in at 18 pages, 1 page editorial/introduction – the cover-artwork and similar shenanigans is its own pdf…so what do we get this time around?

Well, something rather different – not a dungeon, but rather than that, trap-rooms! The first would be the eyes of Parsifur and Dunsane, penned by Kent. It should be noted that the following contains SPOILERS for the traps/encounters herein – only referees should read further.

Okay, so the first room is shaped like a cathedral and is EVIL: A troll thing, friendly enough, wants to paint the characters…and when he does, the character is imprisoned in the painting and replaced with a simulacrum loyal to one of the wizards. The encounter also allows for dungeon-exploration and various, truly devious means of dying, including some metagame challenges – I won’t spoil more, considering the chance that players may still read this, but it is truly nasty and made for the most experienced of roleplayers. Like it!

There also would be a doppelganger room by Akseli Envall that features a very real threat of infiltration of the PC-group and a distinct symbolism…still, I have seen this trick before…a number of times, to be exact. The same author also has another one – which is significantly more interesting: Tar. Mummies. Silence. Darkness. Portcullises. Oh yes, this is nasty! A nice water-themed surveillance room of traps is also provided.

Brian “Trollsmyth” Murphy provides a nice take on the magical holding cell and Jeff Rients features “the incredible pedestal”, a truly amazing and nasty, complex multi-layers trap that is absolutely amazing and will make them feel like magical safecrackers. Mr Rients also has a take on the magical giant chessboard…and it’s okay, but no way close as awesome as aforementioned pedestal.

James Edward Raggi IV also has a couple of ideas – the skull with a gem in its mouth and potential uses for it…which is okay, but didn’t blow me away, basically boiling down to “It’s a time-waster” with some none-too-inspired alternative uses. More interesting would be the hallway, wherein things cease to exist and the lever that literally only frees the monster…but it’s like the red button: Someone *will* need to pull it…right? Finally, he has a cool idea: pool, logs inside, rungs at the ceiling…piranha inside the water. Sounds straight-forward? Well, what about superheated rungs? Sticky or illusory logs? Oily ones? Yup, some seriously nice sadism going on here!

The final trap would be crafted by Wayne S. Rossi players will loath: A nasty idol that charms PCs into feeding it their hard-earned gold! Yeah, they will grumble, but it is a nice one!

Editing and formatting are good, I noticed no significant glitches. Layout adheres to a no-frills b/w-1-column standard and the pdf comes fully bookmarked for your convenience. As a courtesy to Europeans, there are versions of the pdf optimized for A4 as well as those optimized for US-letterpack format. The b/w-cartography provided for the more complex rooms is basic, but functional. As a somewhat unfortunate layout decision, after each entry, the rest of the page is empty – so if a given trap/encounter only takes up 2/3rds of a page, you’re left with some serious blank space, something I’m not the biggest fan of, as it eats more paper when printing.

Kent, Akseli Envall, J. Brian “Trollsmyth” Murphy, Wayne S. Rossi and James Edward Raggi IV have crafted some delightfully sadistic traps herein…and that for a more than fair, low price-point. The gems that are herein justify the more than fair asking price of this little pdf and can work well in games beyond OSR gaming if you’re looking for some really devious material to challenge experienced players. Considering the more than fair asking price, I can definitely recommend this little pdf, even if not all traps/encounters reach the level of challenge and awesomeness the more sadistic ones do. My final verdict will clock in at 4.5 stars, rounded down to 4 for the purpose of this platform.

You can get these nasty, sadistic traps/encounters here on OBS!
Endzeitgeist out.