In the Company of Gelatinous Cubes Expanded

In the Company of Gelatinous Cubes Expanded 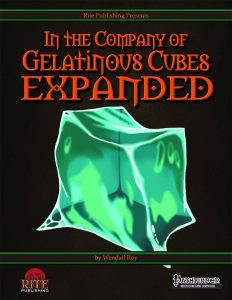 This expansion for the by now legendary pdf that lets you play a cube of slime clocks in at 10 pages, 1 page front cover, 1 page editorial, 1 page SRD, 1 page advertisement, leaving us with 6 pages of content, so let’s take a look!

Oh boy, and there we go – not only does this begin with an expanded, longer version of the original booklet’s slime-sound, this metadventurer prick that has been annoying me in my review of his book and its product discussion…now has actually started creeping into the file. WTF? Anyway, ignore his biting remark on the none-too-clever opening joke. I’ll take his pizza-rations away and see whether I can starve him off my couch.

But I digress. Back to your regularly scheduled review. So, was playing a hunk of slime not ridiculous enough for your taste? Did you think “Oh boy, I need this to go one step further!” – fret not, for this pdf actually delivers just that with the Mythic Gelatinous Cube Paragon Path.

Let that sink in.

The path only gets access to universal path abilities and the path abilities it features are treated as universal 1st tier path abilities. With mythic adventuring buddy, the cube can suppress its detrimental effects and may, as a movement or 5-foot step, move into an ally’s square, displacing the ally to its previous position…which is actually a pretty cool and well-executed ability. Quicker ooze empathy would be covered and the vast variety of ooze abilities now come with mythic iterations. Better sticky pseudopods!

More uses per round of amorphous dodge, powered by mythic power. Using corrosive secretions to destroy stone (we’ll take the shortcut through the dungeon!), making improvised tools of slimy resin, adding temporary hit points to itself and the duplicate generated via fission…and have I mentioned being able to ignore serious amounts of acid resistance and even partially immunity? The latter is a bit weird, for the target creature still takes half damage, which means that immunity to acid could be potentially worse than acid resistance, but oh well – that’s arguably a numbers game unlikely to happen in actual play.

A doubled slam dance, an end to speedy expulsion’s cooldown, gaining an AoO (both original and split) versus the creature that split the cube…there are some actually tactically viable and intriguing options contained herein – even if you don’t want to play one, as far as GMs are concerned, oozes can greatly benefit from several of the tricks presented herein, adding some serious scavenging potential to the mythic path.

A pretty wide open ability also allows mythic gelatinous cubes to absorb various magic items and transmogrify them into a new one. The guidelines here are pretty concise and the GM thankfully has the last word, but this still would be an ability that warrants close monitoring by the respective GM – not due to a botch by the writer, mind you, but as a system-inherent consequence of the design of such an ability.

This is not where the pdf ends, though. In fact, I love where it goes next. To paraphrase the flavor text here:

Introducing the ID Ooze archetype for the gelatinous cube paragon class! Yes, you can now play a psychic slime! At 1st level, the archetype grants Psychic Sensitivity and at-will instigate psychic duel as an SP. It has an effective manifesting level equal to 1/2 level (minimum 1) and uses Cha to govern the saving throw DC. The gelatinous cube may suppress an ooze ability until it rests for 8 hours to gain 2 MP. This replaces ooze empathy and 2nd level’s ooze ability. Starting at 7th level, the ID ooze can add anesthetizing slime’s effects to an offensive manifestation, with different effects than the usual ones. This, however, replaces growth. 12th level yields fast healing in psychic duels, though, to prevent infinite healing, only damage incurred in a binary mindscape may be healed thus. The fast healing improves over the levels.

Beyond this interesting specialist, we go one step further with shape flairs – these would be a type of archetype for the racial paragon class, which replaces ooze empathy and anesthetizing slime – a total of 5 such flairs are provided, with cone-shaped gelatinous slimes being first…and beyond getting a spear-like tip, they have a VERY powerful ability that lets them act as a lightning rod upon a filed AoE-save and fire the effects as a ray after that. Oh, and if you’re in the cone zone, you’ll provoke AoOs when leaving it. Cylinders are smooth in movement and gain both Redirect Attack and free repositions versus smaller foes, among other things.

Dodecahedron shaped oozes get d12 HDs…and is basically a funny way of making sure your d12s get ample of use: They move faster and may substitute attack roll d20s for d12s, which is extremely potent for crit-range enhancers, obviously. Substituting d12 for slam damage and gaining a nauseating strike when you roll a 12 sans modifying it makes for a funny and interesting option. Pyramidal slimes are really good at Bluffing, being four-faced and all. They also may demoralize undead (resembling pyramids) and at the higher levels, they gain the dread ability of the pyramid scheme to siphon the luck of unfortunate demoralized foes. Worse: If a creature is conscripted in two different such schemes, Ponzii, dread Duke of Hell gates in and starts unleashing havoc on all present.

Finally, the extremely smooth sphere would be the final shape flair, which gains superb mobility and at higher levels, missing the sphere can incite a horrid rage (Yep, the ability is called “They see me rollin'” – XD); finally, at 17th level, the sphere can temporarily turn black and almost annihilation-level nasty…which is something I feel the strong urge to inflict on my players ASAP.

Editing and formatting are excellent, I noticed no serious glitches. Layout adheres to Rite Publishing’s two-column full-color standard and the pdf comes with a nice piece of full-color artwork. The pdf has basic bookmarks, which is a nice feature considering the brevity of the pdf.

Wendall Roy made me laugh more than once with his expansion of gelatinous cube options. Now I would not consider all of the options provided herein perfectly balanced….but we’re talking about a gonzo game wherein playing a gelatinous cube is actually an option. Now, with this pdf, you could conceivably run a module wherein the PCs are all transformed in gelatinous cubes/cones/cylinders/etc. and for such a one-shot, this is absolutely glorious. In fact, while the d12-crit-ability is pretty strong, for the purpose of actually playing the cubes et al., this makes for a pretty amazing supplement.

In short: This is an amazing, fun way of expanding the options of the base file; it is extremely affordable, well-crafted and even innovative in some of its rules-modifications. In short, this is an excellent pdf, well worth 5 stars + seal of approval.

You can get this inexpensive, gonzo pdf here on OBS!

You can get the original ItC: Gelatinous Cubes here on OBS!