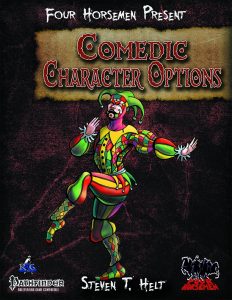 Ah, the art of comedy – a topic only relatively seldom used in gaming – all the more reason to take a close look at this particular little file, which begins with 6 new traits -these include being able to Disguise as a clown or properly insult adversaries, featuring mechanical relevance as well as a mundane prestidigitation effect via Sleight of Hand. Slapstick Offense is pretty powerful in that it offers unarmed strike damage at one size larger for characters with Improved Unarmored Strike, but only when dealing nonlethal damage. This is in addition to not provoking AoOs, but does not count as Improved Unarmored Strike. While not problematic in a vanilla context, I can actually generate builds where the strength of this trait exceeds what I’d consider viable for a trait. Considering the very fringe builds, though, this gets a pass. On a slightly annoying note, the traits do not feature the respective trait subtype.

After these traits, we move on to the archetypes presented herein, the first of which is basically a complete rewrite of the most awe-inspiring class in PFRPG: The commoner. Yes, you heard me – the Comrade archetype designates up to Charisma modifier buddies, which must be helpful humanoids he has spent at least 24 hours with. These buddies grant the comrade hit points, BAB, proficiencies, save-bonuses, skills, etc. Beyond that, they begin play with two aid another actions for one and may apply the benefits to the same target. 7th level and every 6 levels thereafter increase the bonus of aid another up to +5 at 19th level. Starting at 11th level, aid another automatically succeeds and 17th level adds a duration to aid another – 1 round, instead of one action. The archetype also provides an array of bonus feats chosen fro a list, utilizes Pathfinder Unchained’s skill unlocks at 5th level and every 5 levels thereafter and at 3rd level, these guys may emulate non-spellcasting 1st level class features of allies, which stack if he ever takes class levels in a class that has the ability. Additionally, at 6th level and every 3 levels thereafter, he gains another one of these. All in all, this archetype is a mechanically relevant and fun take on the comedic sidekick that bumbles along and will see ample use in less high-powered games. Two thumbs up!

The derelict paladin loses her aura of good and detect evil, but may turn a blind eye to evil-doers. 4th level provides channel negative energy (sans undead healing option) and 5th replaces divine bond with a mopey debuff aura. 8th level provides the “Aura of Whatever”, which renders immune to confusion and emotion effects and confers a bonus to saves to allies. And yes, this one made me actually grin while reading it.

Utterly ridiculous in a world where gods are pretty much evident everywhere, the gnostic atheist cleric may have any alignment because gods don’t exist. D’uh. They don’t get domains, auras, but do get bonus spells – these are called “domain spells” in their header. They also gain SR + 6 + class level, upgraded to 11 + class level at 8th level versus divine magic and 4th level provides Improved Counterspell. 6th level and 12th level enhance counterspell capacity versus divine magic and 8th level allows for immediate action counterspelling, but at the cost of actions in the following round, reducing that to a move action. Finally, at 10th level, the archetype gains an aura that hampers outsider spellcasting and scales with levels. Hilarious and cool!

Mad scientist alchemists may make devices, which are a variant of extracts (which they can still make) and replace Brew Potion with Craft Wondrous Item. 2nd level allows for the poaching of sorc/wiz spells for formulae…but at the very real chance of blowing up the laboratory (and the mad scientist). Very powerful, but pretty funny! 2nd level provides also scaling bonuses versus fear that end in immunity at 10th level and 6th level nets SCIENCE!, which lets him sacrifice two prepared devices to create/jury-rig another device from his formulae book…and yes, the restrictions prevent abuse. Powerful, but cool…GMs of low-powered games may want to cap the experimentation ability to poach sorc/wiz spells, though.

Prankster bards replace Diplomacy with Disable Device and replaces bardic performance with antics: At first level, he has 4 of them and gains another at 3rd level and every 3 levels thereafter, with saves adhering to the 10 + 1/2 class level + Cha-mod formula, if applicable. Some antics have an asterisk, which means that they have a mechanical component – they basically sport a cool-down of 1d4 rounds before they can be used again, though some of teh antics do have hard daily caps. Basically, instead of a linear sequence, we get a ton of antics to choose from – which is something I wholeheartedly support. Souring the mood of everybody via bad jokes, acid-squirting Joker-flowers, comical weapons, false appendages, immediate action debuffs, imitating horseplay to improve charges…pretty cool. Now the archetype, as a whole, is pretty amazing…but it does overshoot its target a bit in e.g. the inflatable image: As an immediate action taken as a response to being hit, but before effects/damage are rolled, he can declare the attack to hit an inflatable dummy, dealing no damage whatsoever to the prankster. I get the intent and like it, but considering that it’s an limitless (apart from the cooldown) ability that can negate any melee (melee only – no help vs. spells/ranged attacks) attack, I can’t help but see the lucky player dancing around a foe. Still, the restriction to melee keeps it from being totally OP, though I would have preferred a class-level scaling damage reduction instead. Have I mentioned the prismatic pie? It’s pretty cool…though layout/formatting here is a bit deceptive – it has a minimum level of 15th, which looks at first glance as though it was applying to Shocking Gag. And for die-hard Ravenloft enthusiasts who remember the utterly horrid (but conceptually cool) jester darklord…guess what? At 18th level, we get the Killing Joke.

The pdf also offers a selection of feats: Dodecahedron Spell increases damage dice to d12; the higher the base damage of the spell, the higher the spell-level increase…and yes, this should let the poor d12 get some use. Extra Antics is self-explanatory; I Think I Can lets you retry failed skills with bonuses, but inflicts nonlethal damage. Better iterative attacks after missing are interesting and gaining the bonus even after an ally failed to aid you is nice as well…though if you do get it thus, you can’t be aided by that ally in 24 hours. Oh, and rounding up on save DCs and class levels/HD, etc. Why? Because you’re weird.

The pdf provides the classic inversions Bull’s Grace and Cat’s Strength as well as a properly as evil-designated spell that many a person can cast IRL: Dreaded Nag. Oh, and that cool animal companion/familiar/eidolon/phantom/mount of your foe? Let’s see how well it does as an utterly useless rubber chicken. Oh, and when you or an ally deal precision or crit damage, neutralizes an opponent or drops him unconscious, you may cast the most annoying audible support ever – vuvuzela.

Editing and formatting are very good; while the missing trait types and the formatting of the pie-antic could have been better, that’s not a game-breaker. Layout adheres to Rogue Genius Games’ two-column full-color standard and the pdf sports a number of thematically fitting b/w-artworks inside alongside the cover. The pdf comes fully bookmarked with detailed, nested bookmarks for individual archetypes, feats, spells, etc.

Steven T. Helt’s comedic character options are actually FUNNY. No, really. This book is pretty amusing and a nice read, in spite of being a very crunch-dense book. It is also a return to form, at least in my book – there is not a single filler archetype herein: All have some sort of unique mechanic that makes me want to play them or see them in action and from lowly trait to feat and spell, I consider none of the options herein filler. The buff-inversion variants maybe…but not everyone is familiar with that idea. Anyways, this is certainly one of the best character options the horsemen have put out and I wholeheartedly enjoyed just about everything here. My own gripes pertain ultimately personal preferences with one exception: The Mad Scientist should imho really have a poaching cap for sorc/wiz spells (or a bigger tradeoff!). This and the missing trait types are all that keep this from being a unanimous recommendation. My final verdict will hence clock in at 4.5 stars, but considering how good the majority is, I’ll round up and since it’s hard to do comedy and still get rules etc. right as well as the fact that I really like both fluff and crunch here, I’ll also slap my seal of approval on this.

You can get this cool collection of options here on OBS!