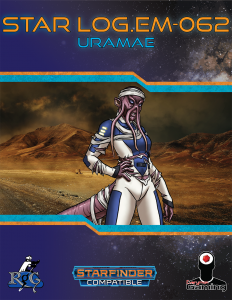 So, on the introductory page, we get a proper uramae subtype graft, as well as mummy rot as a special disease codified within SFRPG’s system – and a feat: Uramae of 5th level and a certain heritage can take that feat and sped 1 Resolve point to infect foes hit with unarmed strikes with mummy rot; this is balanced by a single opponent succeeding on the save being immune to this for 24 hours. This is relevant, because the mummy rot DC scales based on half class level and key ability modifier.

Uramae in the Xa-Osoro system hail from the dead world of Uramesh, and actually are the deoxyian’s progenitor race. They get 4 Hit Points, +2 Con and Int, -2 Dex, are Medium, and have a touch of Spock in them – 1/day, an uramae can take 10 on a d20 roll or “chekc”[sic!], except ones that automatically fail on a natural 1; additionally, they get a +1 racial bonus to a check when taking 11 – essentially, they take 11 instead, which is clever. Uramae are fast – they have a speed of 40 feet and get an extraordinary fly speed with average maneuverability – however, this is thankfully balanced by needing to end movement on ground or fall – they basically can hover-jump short distances. Cool! Additionally, uramae belong to one of two ethnic groups.

The first of these would be the mumiyah – these count as both humanoids and undead, whichever is worse, but are immune to negative energy and get +1 to Fortitude saving throws vs. disease, exhaustion, fatigue, mind-affecting effects, paralysis, sleep effects, and stunning. They count as living for what can affect them, and this ethnicity can take aforementioned feat. They may also be brought back to life.

The second caste, the wsjr, gains Great Fortitude, iron Will, or Lightning Reflexes or Toughness at 1st level, and may take these feats as replacement class features at 4th, 6th, 12th and 18th level. Wsjr also gain +1 skill rank at first level and every level thereafter. Really cool: We do get full racial notes that include “If you’re an Uaramae…” and “Others probably…”-sections – kudos for their inclusion!

Uramae lay eggs, as the notes on their life cycle make clear, and speaking of which – we get proper tables for their life cycle, codifying age categories, height and weight – here, the races goes one step beyond SFRPG’s standard, which I wholeheartedly approve of.  The Uramae are a race defined in part by calamity – after the schism that split their race into the uramae and the deoxyians, the planet basically slew their home world – and now, in domes cities, the forces of necromancy and means to maintain the scarce resources are all that keeps the race from extinction. Suffice to say, uramae are not particularly fond of their genetic-engineering brethren.

The living wsjr, as a consequence, are actually today the minority of the species, which can be a very interesting twist for the society. Furthermore, there is an interesting further schism – while some could argue that the deoxyians are mutating, evolving at the cost of everything around them, the same can’t be said for the uramae, who believe that their society, a concept they think of as a living entity, reached its pinnacle thousands of years ago. This streak of conservative ideology, paired with a focus on logic, has been thought through in an interesting manner – essentially, the wsjr are a valuable commodity for the mumiyah; treasured and yet, as the wsjr contend, treated as children, as pets. Combined with the unchanging nature of undead, we have a great mirror-image of the sprawling, mutating evolution of deoxyians – a society defined in a way by unchanging stagnation, and yet one that requires the living beings that desire change to maintain its very existence. This is a great basic conundrum and offers plenty of roleplaying potential, particularly if more than one PC is an uramae – one mumiyah and one wsjr certainly make for a great dynamic all on their own.

Editing and formatting are very good on a rules-language level, .and good on a formal level. Layout adheres to the series’ two-column full-color standard, and we get artworks for both ethnicities of uramae, which is cool. The pdf has no bookmarks, but needs none at this length.

Alexander Augunas and John Laffan paint a compelling picture of a race split it twain twice – once in the distant past, and, ironically, once by the very structure on which their conservative society is based. I really loved the unique psychological angles explored here, and the clash of themes and how they are explored – the uramae are an interesting race that features sufficient intriguing flavor to make them unique and compelling to play. My one complaint here would be that more information on the cataclysms that wrecked the race, and how it influenced their social order, would have been awesome. My final verdict will clock in at 4.5 stars, rounded down for the purpose of this platform.

You can get this interesting race here on OBS!

If you like my reviews, please consider leaving a direct donation or supporting my patreon here. Every little bit helps.