EZG reviews The Genius Guide to the Talented Rogue

The Genius Guide to the Talented Rogue 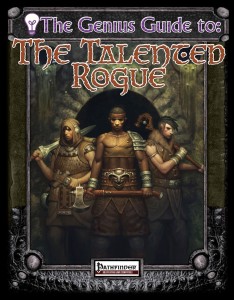 All right, as the regular rogue, the talented rogue gets d8, 8+Int skills per level, 3/4 BAB-progression, good ref-saves and proficiency-wise, talented rogues get proficiency with all simple weapons, the crossbow, rapier, sap, shortbow and short sword as well as light armor, but not shields.

Now unlike regular rogues, that’s about where the fixed part of the class ends and where a cornucopia of options begins: At the first 4 levels, talented rogues have to choose an edge each- and they better think carefully, which one they take: After that, no new edges can be acquired in any way! When applicable, the respective edges include the information from which archetype they were taken in brackets. A massive total of 30 such edges are yours for the taking and from evasion, uncanny dodge, trap sense etc., there are a lot of different edges to choose from – special mention deserves the fact that there’s also a ki pool tied to int or cha in here – allowing for a more versatile choice than via the standard ninja’s options. But more on that one later – follow up, effortless sneak etc. – all the favorites from archetypes we’ve come to love are in here, yours for the combination and to make your rogue a truly unique individual.

Edges are the one component and a rather strong one that mirrors well the more powerful abilities rogues get at low levels. Beyond that, at first level and every level after that, the talented rogue gets one rogue talent – and yes, sneak attack is now a rogue talent, but one of the few that can be taken multiple times to allow you to truly customize how far you’d want to go with the respective sneak attack power. From the Sniper’s Accuracy to the Ninja Acrobatic Mastery, combat feats to grit (via the amateur gunslinger feat and only after learning firearm training), fast stealth, hidden weapons, a small wis-based ki pool (or 1/2 wis-mod ki points as bonus to an existing one) to wall climbing, there are a lot of talents – unless I have miscounted 111 of them! And no, I’m not going through them piece by piece – neither will I go through the 42 advanced talents which are added to the list at 10th level – though, as always, some (like the assassin’s angel of death at level 15) require higher levels – or edges. If you don’t have the evasion edge, there’ll be no improved evasion advanced talent for you – and yes, others require specific talents.

The same counts for the 3 capstone grand talents that are available at 20th level. At the end of the pdf, we get an extremely useful list of talents organized by category (e.g. Offensive [sneak attack] or movement), helping you find just which talent you wanted at first glance.

Editing and formatting are very good, I didn’t notice any crucial glitches. Layout adheres to SGG’s 3-column, full color standard and the artworks are fitting. The pdf comes fully bookmarked for your convenience.

Owen K:C. Stephens second talented class is interesting in that it is more complex than the fighter – while being less complex than the monk – and yes, I’ve read this after the monk. And one can see a progression – the monk has been the harder to get right in my opinion, with the rogue already featuring talents and all. Still, the breaking down of all those static abilities into edges and talents is awesome, minor modifications adding to the value of them and how difficult abilities like ki pool etc. are handled make this so much nicer – also, it should be called “Talented Rogue/Ninja” – since all the tools to customize the ninja are in here as well – with options to make ninja that are not dashing scoundrels, but rather cold killers – which makes much more sense to me than the weird cha-mod-based ki pool of the original class. Modular, well-organized, cool – this pdf is glorious and well worth the investment for the sheer amount of customization and options it allows you to explore: 5 stars + seal of approval.

You can get this more versatile/customizable rogue/ninja here on OBS and here on d20pfsrd.com’s shop!