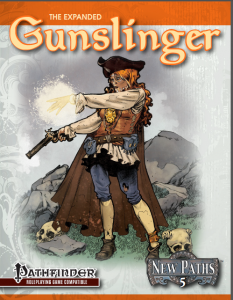 This supplement is 14 pages long, 1 page front cover, 1 page editorial,1 page advertisement and 2/3 of a page SRD, leaving us with 10 1/3 pages of content, so let’s take a look!

We kick off this supplement with new firearm-themed traits – 8 to be precise. And they actually are interesting – most of them have options to be used in black powder-less campaigns and two in particular stand out: Kobolds and halflings may opt to be scavengers and thus ignore the penalties of the broken condition of firearms, though increased misfire chance still applies. The other one would be Gun-shy: Taking a cue from one iconic trope from countless movies, taking this trait makes you take a -2 penalty to atk with firearms and automatically become shaken (but not frightened for further shots) when using a firearms – in return, though, you get a massive +4 bonus to confirm critical hits with them. Plain awesome – two thumbs up!

Next up are 11 new feats and while many utilize grit, not all of them do. Being more pain-resistant as long as you have grit (bonus to saves), you may also heal yourself 1/day by spending 1 point of grid for 1d8+class level hp. Covering Fire is also BRILLIANT – when succeeding a touch attack as a standard action against a foe, you may opt to deal no damage, instead granting an ally (or more with the improved version) a +4 dodge bonus to AC for a round. Disabling devices via well-placed shots is another absolute winner. Also rather neat – as a full-round action, you can threaten all squares within 30 ft. for a round – a nice take on the trope similar to LRGG’s overwatch, but more limited. Free stare-down intimidates have been done before, though there’s nothing per se wrong with that. Steel Fury is also epic – 1/round when suffering firearm damage, you get 1 round of rage or one point of grit – finally something for gun-toting barbarians! Monks may opt to adopt the Thunderous God Stance, which is a style in all but name (instead being a combat feat tree): This style allows you to wield your  firearm as a bludgeoning weapon and mix unarmed and firearm attacks in flurry of blows.  The follow-up feats allow for quicker reloading via ki and stop provoking AoOs as well as essentially making a 30 ft. whirlwind attack with a firearm, applying precision damage etc. only to one of the targets. The latter feat would be overpowered, were it not for the MASSIVE requirements that even the playing-field – hence: No complaints. Finally, there’s a feat that allows you to use intimidate and diplomacy via firearms -the only one of these feats I wouldn’t consider excellent – and that saying quite something!

Next up are new archetypes, first of which would be the Black Hat for the Gunslinger-class – essentially a Malefactor light for gunslingers, these individuals are master of psychological warfare and jinxes, causing bad luck, mishaps and even potentially making enemies fumble for grit-expenditure – neat one! Barbarians may become Black Powder Reavers now – which nets a weaker rage, but also the amateur gunslinger feat while raging. When in rage, moment of clarity is required to reload, may use firearms sans bullets (with a greatly reduced range – though the ability does improve) and a limited fixed amount of deeds and feats. Again, neat!

Oozing flavor and offering something for those who hate blackpowder in their game, Coilgunners have salvaged their weird weaponry from ancient civilizations and use these mysterious coil guns with their alchemical ammunition. Being more scholars than killers, they get grit not from killing, but from scoring crits or suffering misfires. The archetype also gets 3 exclusive deeds that replace others from the gunslinger list – allowing you to electrically overcharge your coilgun, dealing electricity damage instead of piercing damage. While mechanically not as exciting as the first two, this one is high and iconic in concept and hearkens back to pulp-themes. Whether introduced via Azlant or Ankheshel, this one is a winner.

Witches may now opt to become Futurists -diminishing their spellcasting for the option to deliver hexes via bullets and for an area of study: alchemical, natural philosophy or mechanics – depending on the discipline chosen, we get different benefits and bonus spells – neat! And if you want to go the other way round and want a gunslinger with minor hex-access, the Hexslinger from RiP’s “Secrets of the Gunslinger” has you covered – I love it when 3pps don’t overlap!

Gunfighters are essentially fighters with a focus on guns – more reliable and wealthy in feats, but less flashy than the gunslinger – especially neat for anyone who doesn’t like the gunslinger’s mechanics. Hellfire Preachers could have come from my favorite italo-westerns – disillusioned with the gods, these clerics lose some of their supernatural powers in lieu of the ability to shrug off divine spells easier and hitting foes with massive mortal wrath at higher levels – iconic indeed and once again, both high in style and execution.

Noble Shootists use charisma instead of wis for their grit and also are rather adept at social skills – simple, yet effective.  Noble Shootists also get two exclusive deeds to rally and buff allies when scoring crits and may, against flatfooted opponents, replace the damage her hit would have caused with a combat maneuver – thanks to the limits imposed, a great deed. The pdf also provides a sidebar on gunslinging in Midgard.

Editing and formatting are top-notch, I didn’t notice any glitches. Layout adheres to Kobold Press’ beautiful 2-column full color standard and the full color artworks are neat. The pdf comes fully bookmarked for your convenience.

The gunslinger has been blessed with some awesome 3pp supplements already and I was seriously dreading too much overlap when I set out to read this one. My fears, as it turns out, were completely unfounded. This is one of those rare little crunch-books that literally are all killer – there is not a single problematic piece of content herein – neither rules-language-wise, nor balancing-wise – instead, we actually get content that is high and iconic in concept and execution –  author Crystal Frasier lives up to her excellent reputation and my exceedingly high expectations and delivers – appropriately, with a bang and fanfares. Fans of gunslingers (and everyone contemplating introducing ancient ray-guns from empires past into the campaign) are looking at a must-buy file they should not miss – final verdict? Easy 5 stars + seal of approval.

You can get this awesome supplement for gunslinging here on OBS!