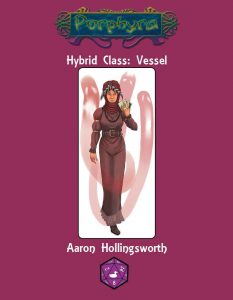 This Hybrid Class clocks in at 26 pages, 1 page front cover, 1 page editorial, 1 page SRD, leaving us with 23 pages of content, so let’s take a look!

So, what is the vessel? In short, it is a hybrid class of the medium and the oracle, but that is not really enough to adequately describe it. Chassis-wise, the class gets ¾ BAB-progression, good Will-saves, d8 HD, proficiency with simple weapons, light and medium armor and 4 + Int skills per level. Vessels start drawing spells from both medium and cleric spell-lists, starting at 4th level, casting them as psychic spells which are governed by Charisma as spellcasting attribute. As you will have noted, they are cast spontaneously and the class does not treat cleric spells of higher than 4th level as belonging to the list and is beholden to alignment restrictions regarding cleric spells. This also btw. Takes into account how orisons are treated as knacks. It should be noted, btw., that the class comes with a massive, custom spell-list you can use instead of blowing it wide open. An interesting pecualirity would be that the class does not cast at -3 levels, in spite of gaining spellcasting late – this does look like it may be an intentional decision, however.

Now, it is impossible to talk about this class without first explaining the centerpiece of the class, the cursed spirits: 6 are presented and he may choose one upon preparing spells, being granted divine bonuses and revelations that may be prepared. Similarly, each spirit is also defined by a curse the vessel must bear while thus possessed. A vessel can prepare one revelation from a spirit, +1 at 3rd level and every levels tehreafter. Unless otherwise noted, these are standard actions and the vessel can dismiss spirits as a full-round action, losing the respective abilities. Saving throw DCs are governed by Charisma and follow the 10 + ½ class level + Cha-mod formula. A vessel gains a spirit bonus while channeling a spirit, starting at +1 at 1st level and increasing that by +1 at 5th level and every 5 levels thereafter.

Starting at 2nd level, the vessel may avoid failure: After rolling a d20, the vessel can allow his cursed spirit to add +1d4 without requiring an action. This may be used 2 + Charisma modifier times per day and 10th and 20th level increase die-size by one step. At 4th level and again at 6th level and every 3 levels thereafter, the vessel may once completely reassign his skills over night. 5th level yields location channel, duplicating call spirit and requiring that other characters pose the questions. 7th level eliminates the requirement for a special connection to the spirit called via location channel. 13th level yields a reliable, non-draining contact other plane. 14th level provides astral projection, but 18th level becomes really interesting: If an ally that has participated in the special location channel seance (which, like other abilities, refer to it as seance – which it is, granted, but using the name would have been better) dies, the vessel can take his spirit, forming basically a two-player gestalt – really cool, as it allows for the dead PC’s player to still act! The complex rules also work. The capstone may be freely chosen from the spirits and remains active, regardless of spirit inhabiting the vessel. These are potent and flavorful.

Okay, so, what do these spirits do? Well, the Babling Priest is cursed by tongues, with 5th level and every 5 levels thereafter yielding an increase of the powers granted by the curse. Each spirit has unique, custom revelations that include, in this one as an example, better spellcasting under the starry sky, calling down the cold of interstellar cold, immunity to lycanthropy or the like; big kudos for going the extra mile and providing custom packages for the spirits! The other spirits share, btw., a similarly strong array of leitmotifs: The blinded warlord gets battlecries, healing and defensive capabilities, and special, supernatural martial tricks. The disturbed captain is haunted and can call forth the spirits of the dead as shields, as buffs, become incorporeal, etc. The hobbled lictor may be lame (regarding his legs), but is anything but lame, design-wise: With his rusting grasp, item conjuration, scrying through iron and his martial tricks, he makes for a damn cool spirit. The unhearing criminal is one with his city, a nameless killer hiding in urban environments and from urban survival to intelligence gathering, he is the spirit you want. The withered sage, struck by wasting, provides limited arcane spell access and may use his Charisma instead of Dex for AC and Ref-saves with the right revelation. Symbol spells and Knowledge tricks complement this one.

All of these spirits have several things in common: They feel complex and interesting, archetypical without being too specific; they offer a surprisingly unique variety of tricks each and they make for damn cool options. Oh, and their rules-language is point on. They also breathe that sense of the occult, of slight hints of the darker, that really made the class stand out for me. Now, if you prefer a less occult-feeling version, fret not: I’d like to direct your attention to the archetype presented herein, namely the primalist, who replaces the spirits gained by the regular vessel with elemental spirits (no surprise there, given Porphyra’s element-theme) –beyond the 4 classic elements, creation and destruction make up for the missing two spirits to bring the archetype to 6: And yes, these are depicted in just the same, highly-detailed manner.

And yes, they have curses assigned to them, which is a bit weaker from a fluff point of view in my mind, but retains the spirit (haha!) of the class. The custom revelation lists for these fellows include being able to assume a form of pure life eenergy that allows you to walk through allies to heal them (with a limit, thankfully!) or damage the undead; stagger foes with attack spell crits; establishing life links…we have some healing options here that are relatively unique and uncheesable. Now, not all aspects are perfect – uttering a doom-prophecy debuff, for example, imho should be language-dependant and is “only” mind-affecting – but as a whole, the mechanics are surprisingly concise and really well-crafted. Seeing through stone and earth, gaining steelbreaking skin…it’s really uncanny. Whenever I think I have seen everything cool that can be done with the very well-covered elemental theme, some author from PDG’s cadre surprises me in a positive manner!

4 feats are included: One can double the spirit surge bonus for a 1 hour cool-down; 1 nets +1 revelation. Mixed spirits allows you to be inhabited by 2 spirits, with stacking benefits and penalties, which is pretty much a must-have feat for the class, locked behind 2nd level, which may be a bit early. Wakeful Spirit lets the spirit guard you while sleeping and allows you to wake up as a move action, sans this hassle with the sleeping rules. The pdf provides a massive list of favored class options, which cover not only the core races and some of the more exotic ones, but also a significant assortment of Porphyran races. These are all solid and we conclude with Madame Xemu, a sample CR ½ level 1 human vessel currently inhabited by the disgruntled captain.

The pdf also comes with a bonus file: The Shadowcat monster, penned by Mark Gedak. Clocking in at CR 8, we have basically a psionic chameleon cat with a serious damage output Really deadly and perfect for when your PCs stopped fearing dire lions etc. At Str 25, these fellows bring the pain!

Editing and formatting are top-notch. On both a formal and rules-language level – I noticed no crucial hiccups and the only valid complaint I could come up with would be the nomenclature of referring to seances. That’s it. Layout adheres to a full-sized 2-column standard in b/w with purple highlights – printer-friendly, no complaints. The pdf has no art apart from the covers. The pdf comes fully bookmarked for your convenience, with nested bookmarks and all. The bonus pdf has no bookmarks, but since it contains one creature, they wouldn’t have made sense anyways.

First of all: Kudos to editors, Perry Fehr and N. Jolly for making this as crisp as it is –bonus types are concise, complex rules precise and healing is cheese-proof. And, of course, the congratulations should extend to the author Aaron Hollingsworth, who has come a long way indeed. You see, hybrid classes have a tough position: In order to be truly valid, they have to be more than the sum of their parent classes. Similarly, they need something that sets them apart as a distinct entity, something unique that changes the playing experience beyond what a simple archetype could provide. And preferably, they should also have their own in-game identity. The vessel succeeds at all those tasks. The low-level spellcasting capping at 4th level makes the class not one for novice players, but the spirits are amazing. The flexibility is here and the vessel plays in a truly distinct and interesting manner.

The spirits are cooler than those of the standard medium, at least as far as I’m concerned, and they offer a serious array of unique options that make the class feel unique. The bang for buck ratio is also strong in this one: You get basically an alternate class as an archetype (MASSIVE!) that’s just as strong, if in a different tone, as the base class and the length of the options is neat, particularly considering the more than fair price point. Now yes, I had a couple of comments here and there, but I honestly consider the vessel to be one of the best hybrid classes I’ve covered so far – precise, unique, fun – this is well worth getting and I *really* hope we’ll get alternate spirits at one point, to exchange with the existing ones – the archetypical, storied tropes employed here really struck a chord with me. If you even remotely like how occult classes feel, then this is a must.

In short: This is an excellent, affordable offering, well worth a final verdict of 5 stars + seal of approval.