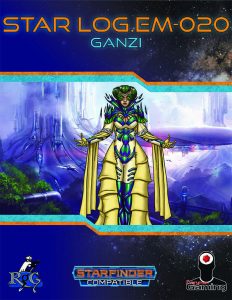 This Star Log begins with the traditional introduction, as well as a nice, brief contextualization of the Ganzi race in the Xa-Osoro system that is shared by Rogue Genius Games and Everyman Gaming.

But what are the ganzi? Well they are mortals whose bloodlines have been mutated by generations of exposure to the energies of chaos, whether by living on planets saturated by such energies or the direct lineage tracing back to beings like proteans. They can, in theory, be born from any race, but humanity, being numerous as it is, is the most likely base stock of the race. Their physical descriptions may thus vary wildly: Shimmering hair, fluid eyes, barkskin – quite a few such ideas are noted. They do not claim a single homeworld, and have increased in number since the regicide-event. As chaotic beings, they are prone to wander and come into conflict with law and order – something that also influences their racial relations. Adventurers and nomenclature is also noted, though we don’t get the side-bar that notes what other races usually think about you, you know, the “Playing a *insert race name*”-box.

Ganzi are medium outsiders with the native subtype, get +2 Constitution and Charisma, -2 Intelligence, darkvision 60 ft., +2 to Sense motive and Survival and acid, electricity and sonic resistance 5, as well as +2 to saves versus transmutation effects. Once per day, they can twist probability with their supernatural Quibble ability, using their reaction to force a creature they are aware of to reroll a d20 they just rolled, with a Will-save to negate. The DC here is governed by Charisma, and this is a curse-effect. Notice something? Yeah, the HP-value, alas, is missing. *sigh*

Ganzi get three racial feats: Boon Quibble lets you use quibble as a standard action. If you do, the target gets 4 luck points, which may be spent when rolling a d20. For each point spent, the target adds an untyped +1 bonus. Multiple uses on a target don’t stack, thankfully. Resolute Quibble lets you spend Resolve to use quibble once more. Twisting Form, finally, nets you 1/day disguise self (italicization missing) that lasts for 24 hours or until dismissed. Disguise is also gained as a class skill and if the target already has it, the character instead gains a +2 racial bonus.

Editing and formatting are very good on a formal and rules language level – apart from the missed italicization and the missing racial HP, that is. Layout adheres to a nice 2-column full-color standard and the artwork is nice. The pdf has no bookmarks, but needs none at this length.

Alexander Augunas’ ganzi have a nice mechanic angle with the fate/luck point idea, but, at the cost of sounding like a hipster, the chaos-tiefling/aasimar/plane-touched angle is not exactly super-interesting. The chaos-angle could have been implemented in much more interesting ways – as a template race that accounts for the different parental races, this could have been more interesting. Similarly, a slew of sample mutations would have been nice. As a whole, this is a solid, if not mega-exciting race, particularly when compared to the genius and both mechanically and conceptually inspired Msvokas. (Seriously, get these!) My final verdict for the ganzi will hence clock in at 3 stars.

You can get this race here on OBS.

You can get the inspired Msvokas here on OBS!