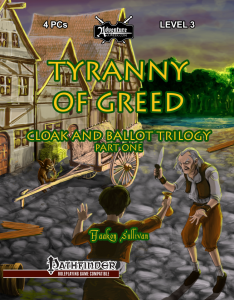 This first part of the Cloak and Ballot Trilogy is 40 pages long, 1 page front cover, 2 pages advertisement, 1 page ToC/editorial, 1 page SRD, leaving us with 35 pages of content, so let’s take a look!

The town of Rogail was once in the grasp of a tyrant – and while said times are past, peace has not come to the place. When the order of  t5he united voice made it possible for the townsfolk to elect their leadership, they did not count of the charismatic Willard Maypoll, one of the town’s crimelords. Seizing his chance, he managed to get elected and has ever since used his newfound power to get rid of the competing syndicate, utilizing both his own guild, the blood blades and the order to further his goals. Until recently, unopposed. When a local man named Raul Teak was killed, it was the last straw for local merchant Trina Hearth, who hires the PCs to conduct the investigation – at the risk of her life and livelihood, as they immediately realize, when a wagon full of oil hurtles and crashes at the very doorstep of their employer to be – potentially even turned  into a blazing inferno by some vexgits. If the PCs manage to save the incapacitated half-orc driver, they’ll get a good inkling of the local “justice”, with guards taking the poor unfortunate on a flimsy non-pretense to prison.

Briefing the PCs in private, they are introduced to the town’s predicament, with the order as a benevolent, if extremely rigid organization and hiring the PCs to get rid of the problematic extortion racket that has, with Raul teak’s demise, crossed a line. Gathering information in town proves to be difficult, though – slightly xenophobic and intimidated as the local populace is. Investigating Raul’s brewery, where, after some asking around, a gnome points them towards the garbage man as a potential culprit. Alternatively, just looking for trouble may also be an option for less diplomatically-inclined groups. Staking out the incredibly smelly garbage dump or infiltrating it may see the PCs in conflict with not only thugs, but also deadly garbage dump barnacles – said thugs being caught red-handed while disposing a body of a fellow Blood Blade.

Via further investigations, the trail leads the PCs further – but only if they can survive the assassination-squad sent their way, preferably while staying at an inn. Anyway, the trail leads to the cooperage, where they may not only battle the vexgits, blood blades and the local elven magus owner Larien. Beyond him (and his obvious ties to Willard), there’s also the very distinct, red-bearded Warren, who was in charge of the dump – linking all together. Interrogating the man, provides them no deal versus the mayor and handing them off to the authorities with the accumulated evidence results in only the mayor pulling strings.

When the mayor then threatens Trina and the PCs, the PCs also meet the dwarven head of the local chapter of the order – vital in future modules. After a short debriefing, the authorities show up again – ordering Trina to vacate the premises. Remembering a clause of the order’s scriptures, she takes the one chance she has to cut her losses and remain in town – run for mayor herself! After all, election is next week and so far, there’s not much serious opposition to the mayor. If the PCs want to bring down the mayor, they’ll have to go political and create an effective campaign versus the popular mayor from the ground up – and fast!

With this cliffhanger ends the module. Both gorgeous maps, the one of the town and the one for the cooperage, are provided in player-friendly versions.

Editing and formatting are very good, though not perfect – here and there minor cosmetic glitches à la a non-bold line that should e bold can be found. Layout adheres to a beautiful 2-column standard that reminds one of books and parchment and is more beautiful to look at than the regular used parchment look. The pdf comes in two versions, with one sporting a more printer-friendly layout. The pdf comes fully bookmarked, though the player’s map bookmarks fails to work – at least in my version, that’s the only one.

Tyranny of Greed is a great little module that serves a nice foreplay for the meat of what this trilogy is all about – running an electoral campaign. And I really, really like this premise. The investigation per, its topics  and execution are solid – but on its own, they are, by necessity, less compelling than the things to come. Still, as a module setting the stage, this does its job remarkably well and deserves a final verdict of 4.5 stars, rounded down to 4 for the purpose of this platform. I’m looking forward to seeing the rest of Haakon Sullivan’s trilogy!