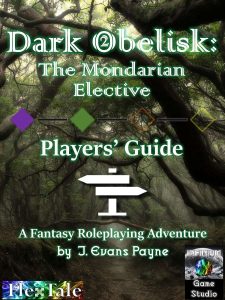 The Player’s Guide for the humongous second part of the Dark Obelisk saga clocks in at 64 pages of content if you already disregard the editorial, etc., so let’s check this out!

This review was moved up in my reviewing queue due to me receiving a print copy of the book in exchange for a fair and unbiased review.

All right, so we begin with something pretty nifty, namely the first page after the introduction stating “So, your game begins in 10 minutes” – it’s essentially the cliff notes version of the current situation. A half-elven stranger leads the PCs to the mining city of Mondaria, which, while under the auspices of the Druid Enclave, has ceased communications with them. Unfortunately, we do have a page-reference not filled in here: The book references “p.<>” instead of the Dramatis Personae section. That should be p.51, btw.

After this, the book explains FlexTale, which makes less sense to be here – it’s a GM-facing tool, so what does the explanation do here? I wouldn’t usually mind as much, but it does have a few guffaws here that make me do so: “What is this book” has obviously been cut copy pasted from the first Player’s Guide or Dark Obelisk II, because it references, you guessed it, Dark Obelisk I. It also talks about being “an inspiration to create your own adventures” and similar GM-facing stuff. This is PARTICULARLY egregious, because the player’s guide actually SPOILS one of the more interesting tricks of the module! I kid you not! There is a potential for a false type of victory, and the player’s guide actually tells the players! Worse, it also flatly explains a certain magical effect right afterwards, undermining at least one of the more clever scenes of the adventure.

Worse, this section of the player’s guide also spoils several GM tricks the module uses to make the adventure run; if the players know these, they’re more likely to attempt to metagame them. Not cool.

There is, however, something that is REALLY cool: We get full play-friendly maps of the City of Mondaria, and I mean “player-friendly”; the book goes the extra mile here: Not only are numbers etc. redacted, secret areas are not shown on the overview map, nor are secret area entrances in any way obvious. This is great. Slightly less great: Arriving in Mondaria, as you can read in my review of that book, is a pretty unique experience, and e.g. the residential zone maps sport a couple of details that shouldn’t be on maps that the PCs got from NPCs – the people who hired them can’t know where bodies are lying, so that limits the immediate usability of a few of these maps. Personally, I’d recommend getting the Atlas instead – it also has player-friendly maps for all of the module.

This does conflate with another aspect of the book you should be aware of in the dramatis personae chapter. The chapter not only provides information on evident characters, but also those that the PCs not necessarily know about from the get-go, once more providing a kind of SPOILER. The NPCs are depicted with absolutely gorgeous full-color artworks, including a couple of b/w-pieces. The descriptions, as a whole, tend to be good – though there are a few that also contain SPOILERS – like notes on how an individual is secretly racist and full of hate, or about hidden weapons. USUALLY, the NPCs differentiate between appearances and descriptions, with the latter being great. Oddly, not all of the NPCs come with this distinction, and particularly the ones that lack the “appearance” section are prone to having information noted that has no place in a player’s guide. And yes, the first player’s guide for Dark Obelisk had similar decisions, but unlike this one, the player characters were supposed to be somewhat familiar with Berrincorte – the same can’t be claimed for Mondaria. They can’t know about racist tendencies, deeply-ingrained hate and the like. How could they? They just got here!

Editing and formatting are okay for a one-man outfit, but certainly not impressive – names are e.g. inconsistent “Gordstrull” vs. “Gordsturll” and the like. Layout adheres to Infinium Game Studios’ two-column full-color standard, with nice, original full-color portraits and cartography – though both of these can be found in the main books as well. The print version is a perfect-bound softcover that properly notes its name on the spine.

I’m sorry to say this, but I consider J. Evans Payne’s player’s guide for Dark Obelisk II to be a disappointing failure. The NPC characteristics and secrets spoiled is not ideal; add to that that the incomplete redaction process for the maps can be considered to be a minor spoiler for one of the best scenes of the start of the adventure, and we have a more significant issue. The third, and most egregious one, though, is that the PG spoils some meta-mechanics and even one of the most effective tricks of the module. One that the actual adventure encourages you to pull off. Well, not if the players have read this.

It genuinely pains me to say this, but I genuinely believe you’ll have LESS fun with Dark Obelisk II if you’ve read this guide, making it pretty much the antithesis of a successful player’s guide.

This is PARTICULARLY jarring, because Dark Obelisk II’s unique structure would have warranted some pieces of advice that it should be tackled in different ways, encourage players to play it differently than most modules. You know, encourage attention to detail and yet caution moderation, when moving on is prudent, etc. Advice sans spoilers that makes the experience of the module more fun. Some basic investigation suggestions? Perhaps an extended briefing? What to look out for?

The fundamentals are here, but the execution of this guide was obviously rushed, to the crippling detriment of this book. As the baseball metaphor goes – 3 strikes, and you’re out – my final verdict can’t exceed 1.5 stars, rounded down.

You can get this player’s guide here, if you really want.