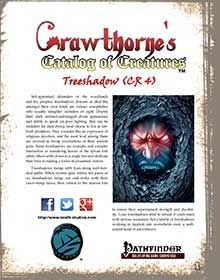 What is a treeshadow? The simple response would be that it is a particularly nasty CR 4 fey – dubbed dkar’thu in their own language, the resemble dark-skinned, fanged elves that generally choose to live their days as a kind of ambush predator: They merge with trees along well-traveled paths and then burst forth from them to slice mortals to ribbons with their claws, believing themselves to be guardians of feykind…a task entwined with their quasi-religious fervor. When they begin their turn in a tree, they get DR 10/adamantine or cold iron and inflict +2d6 with all attacks; additionally, they do not provoke AoOs from leaving threatened squares when emerging from a tree. Tree merging is a bit of an oddity, ability-wise, since it does not explicitly state an action – this is due to it happening basically at will when the treeshadow ends his movement next to a Large or nigger inanimate (nice catch!) living tree. While thus merged, they retain their flexibility and may still move – but the tree is visually twisted…though this twisting is lessened via prolonged habitation; the longer they wait, the better their camouflage becomes. It should be noted that the base damage (2d6) of their claws is non-standard for their size, which is something purists may scoff at; personally, I can live with that.

Conclusion:
Editing and formatting are very good on both a formal and rules-language level. Layout adheres to the 2-column full-color standard of the series and while I’m not big on the social icons and dispersal of non-gaming parts through the pdf, from an aesthetic point of view, there is not much to complain about. The pdf comes with the classic Crawthorne-artwork as well as the treeshadow artwork, which is okay, if nothing special The pdf comes with a second, more printer-friendly iteration, which is nice to see. The book has no bookmarks, but needs none at this length.

Emily Brumfield’s treeshadow is an impressive little build: Fey are pretty fragile and making a good skirmishing fey based on melee attacks is a pretty nice feat in itself. The abilities of the monster are connected well internally and leave me, frankly, not with a lot to complain about. For a buck, this is worth getting. 4.5 stars, rounded up.

You can get this neat critter here on OBS!
Endzeitgeist out.