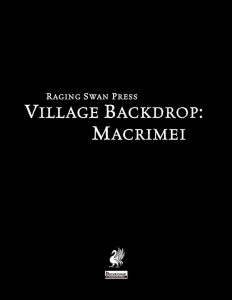 Know then, young prince, that in the days of yore, when Atlantis had first sunken into the seas, there was a place called Macrimei, situated amid windswept hills in colder climes, where ruins howl of ages long past, its populace descendants of a once glorious culture, now reduced to a state that is but a shade of their former glory; a place where once towers of ivory pierced the sky, everything looks as though a certain Cimmerian’s sandaled feet had cut a swath through the landscape. Into this desolation came the wizard Anazturex with his own private little army of henchmen, dubbed after the strange local deity “Soryan”, his Sons of Soryan. It’s been years under this small magocratic rule, and nowadays, everyone is barred from the red obelisk where Soryan’s supposedly worshipped, as the wizard’s tower watches over a village born in ruins.

It is rumored in town, that one day a strange silvery child appeared and subsequently vanished…and the wizard’s tower has an odd tendency to disappear for weeks on end, only to suddenly reappear…but to what ends, no one knows. No I could spoil the truth about the wizard’s nature and the power of the artifact orb of soryan (which comes with full game-rules/information, just fyi) that is found in the red obelisk…but that would do the village injustice. The former village priest Kulway and Grul, brutal leader of the Sons of Soryan, get full statblocks herein and the sample events provided similarly add to the book…but can the PCs unearth the truth of Macrimei? Oh, and in case you are not too keen on the reveal of the nature of the wizard, an alternative is provided as a designer’s suggestion…kudos for going the extra-mile!

This is a place through which Red Sonja, Kull or Conan could have ridden – so saddle up, adventurers and get a taste of the taste of iron and spice, of dust and lotus and check out this village. If you even remotely like the genre, you will love this village – which btw. also doubles as proof that John Bennett not only excels at writing horror… My final verdict will clock in at 5 stars + seal of approval for one of the strongest entries in the whole series.