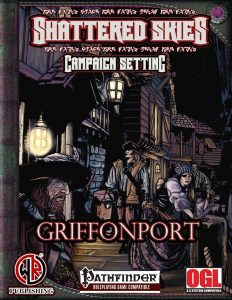 This pdf clocks in at 30 pages, 1 page front cover, 1 page editorial/ToC, 1 page advertisement, 2 pages of SRD, 1 page back cover, leaving us with 24 pages of content, so let’s take a look!

We begin this pdf with a neat full color map of Griffonport and its bay…and it is a town steeped in history, as we learn about the pact of providing griffons to the prides in exchange for the noble eponymous griffons acting as military steeds…though recently, the horse population’s been on the decline, which results in some tensions. Griffonbay island, situated in the bay and erstwhile headquarter of a notorious pirate, has since then become basically an elven embassy, with said pirate missing. Though pro forma part of the nation of Brynndell, Griffonport is, for most intents and purposes, a free city.

The pdf goes on to depict the three noble families and also speak about the covert and overt representations of spiritual life in the guise of the fane of the Grey (or Gray – the pdf is inconsistent here) Maiden, a nasty cult of Shub-Niggurath and a shrine of the sea-goddess. The town comes with its properly formatted settlement statblock as well as with a neat timeline.

Now something that’s hard to convey in a review of text alone would be the unique layout of the town: While the aforementioned map is player-friendly and does not contain spoilers, it covers more than the town proper, instead dealing with the whole region of the bay. This increased scope is represented as well in the rest of the pdf, when the respective sub-regions are once again shown on the map, with keyed locations thrown in; in Griffonport proper’s case, a total of 10 such locations can be found. There would also be the char district, hewn from gigantic pine trees, it is basically a former logging district that acts as the more shady, externalized neighborhood as well as sawmill, glassworks and similar locales…you know, places that would never represent nasty surprises for adventurers. Ähem. Minor quest notes/ideas can also be found here alongside an “Achemist” who is facing a unique issue…

Between the town and this place, the breaking yards contain horse breeding grounds and are obviously less urbanized than other places…but 9 little rumors help adding some flavor to this region as well. I already mentioned the elven-controlled sping lotus district on the island off the coast…and it features its own cadre of detailed fluff-only NPCs and power-structures, making sure than you can get some additional mileage out of this unique place. Oh, and, once again, we get a couple of rumors.

Beyond that, though, the festival of the lotus is just one of the past-times here – with 4 sample games/parties that PCs may engage in, from the risky Talonspar, in which you use a sick horse to try to lure and capture aerial predators to the board-game runaway.

Editing and formatting are okay – while I noticed a couple of editing glitches that could have easily been caught, I won’t complain too much here. Layout adheres to a nice two-column full-color standard and the pdf comes fully bookmarked. The artworks featured range from jaw-droppingly beautiful to nice and the cartography, as mentioned, is nice.

Now this town is featured in the Whispers of the Dark Mother mini-AP and, as such, is actually intended as a supplemental material. The cadre of authors (Robert Gresham, Ewan Cummings, Jessica Carson, John C. Rock, Jarret Sigler) could certainly have gone a more conservative route…but instead, we actually get a unique, distinctly fantastic town…for PWYW. And that’s a big thing; compared to Brighton, the previous free town by Wayward Rogues Publishing, Griffonport is a distinct step forward. The town is interesting fun and makes, in spite of the editing hiccups here and there, for a worthwhile download that is well-worth leaving a tip for the company. While not perfect, I will gladly settle on a final verdict of 4.5 stars, rounded up due to the PWYW-nature of this book. Take a look at the unique town and judge for yourself!

You can get this settlement for PWYW here on OBS!