EZG reviews Rise of The Drow Epilogue: The Commander of Malice

Rise of The Drow Epilogue: The Commander of Malice 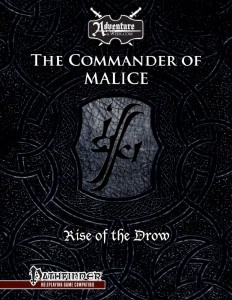 The ultimate finale of Rise of the Drow clocks in at 69 pages, 1 page front cover, 1 page credits, 1 page ToC, 2 pages of advertisement (in the monster statblock sections – annoying if you print them out), 2 pages of SRD and 1 page back cover, leaving us with 61 pages of content, so let’s take a look, shall we?

The war against teh drow is over, matron mother Maelora defeated. Oh those villains…so high level, yet so stupid…Or not. Sometimes, evil mastermind have something called “backup plan”, as befitting of their mental attributes. So does the Matron of House Gullion. In order to defeat her, the PCs will have to track her down in her deity’s home turf, the demiplane of venom. The module kicks off with an interesting little puzzle to recreate the portal before the module kicks off – and it will strike the PCs as weird – PCs just won’t die. They stabilize at -9 hp. If they die and are lft behind, they return mysteriously, find strange healing draughts…but this all part of the master plan and is tracked by the DM via a specific table. More on that later.

The first arrival area is still relatively straight-forward, with a relatively simple puzzle to escape the section – which becomes a very interesting beast indeed, as Maelora escapes through a cube-like teleport maze full of deadly adversaries and no respite – to vanquish this extremely deadly place, its vast array of new creatures (which include btw. venom demons, colossal advanced spider zombies with more than 700 Hp and the dread spite spitters and venomwights…) and sheer endless onslaught of deadly foes, the only way for the players is to use their brains in a rather unique piece of abstract thinking – which personally, I love. Have I mentioned the fact that the venomous water slowly sears and saps away the PC’s strength alongside the war of attrition of the adversaries. It shoudl also be noted that the planar labyrinth, which remains rather complex, gets individual maps for quite an array of the rooms to follow – why? Because these areas are complex, as are their challenges – titan bards with bad poetry, cannon golems, Despairs (the remnants of powerful adventurers defeated on a plane foreign to their alignment – and potentially the fate of the PCs…), a mighty drow malefactor (see TPK Games’ great class, all necessary information included)/ warped-weaver in 3.5 and finally, vanquish Maelora, transformed into a spider-like dark angel hyper-monstrosity of no less than CR friggin’ 23. Worst stat: 20. Yeah, ouch. Rather awesome – mind-blowing bad-ass one-page handout-style artwork of the mistress.

The encounters have their own index and just about all new creatures get their own full color artworks.

Editing and formatting are top-notch, I didn’t notice significant glitches. Layout adheres to a beautiful full-color 2-column standard and the module come with copious pieces of great original full-color artwork as well a a ton of cool cartography. The pdf comes fully bookmarked for your convenience.

Stephen Yeardley and Joshua Gullion’s “Commander of Malice”, is a slug-fest (and no, I don’t mean that in a derogatory way) and an epic war of attrition – all those artifacts, items, wands, potions your PCs have – they better start hoarding them, for even with suggested WBL and smart planning, the module can whittle down the considerate resources of high level PCs. That being said, the module, by design, will evoke hate from your players. The relentless onslaught of powerful foes, the strange terrain, the slowly creeping realization that something is fundamentally wrong. The sadistic requirements to the thinking faculties of your players…this is a module that carries bragging rights for beating and is one of the most difficult modules I’ve seen in ages. The sense of accomplishment in the end will be vast indeed and elicit cheers and high-fives. Still, by its very design, this module walks a very fine path, namely the one that your players, even with the catch that should prevent premature death, should be frustration-resistant and have joy while slogging through (literally!) endless waves of foes. If they don’t have a healthy resistance to frustration, a mindset that they have to work for their triumph, then this is not for them. If they do, though, they’ll have a truly unique experience.

Now one thing you should be aware of beyond that – this module’s text is short – the statblocks, as is the wont with high-level modules, take up a lot of space and that’s not something to complain about. Still, minus the creatures etc., the module is “only” 27 pages long – which looks insultingly short. And I won’t kid – personally, I would have preferred more details, less war of attrition. That being said, you DO get your money’s worth here – the mazes are damn complex and actually *running* this beast as opposed to just reading it, takes A LOT of time. It took me longer than the Prologue and the first Part of RotD combined. So yeah – this beast is definitely not for everyone, though if you’re an aficionado of high level foes and builds and require foes to pit against the PCs but don’t want to make them yourself – even as a statblock collection and only to scavenge, this has something going for it.

Now that out of the way – I do have to say, I still consider it the weakest part of Rise of the Drow, not due to being bad, but due to having a much narrower appeal than Prologue and main book – this module is a challenge to be beaten and should make the old-school crowd and fans of truly brutal modules exceedingly happy, but if the regular RotD already tested your group to their breaking point, then be cautious – this is for pros indeed. I won’t hold it accountable for its brevity or its design choice, for it succeeds well at what it does, but I still think that a tad bit more versatility would have improved this beast. My final verdict will clock in at 4.5 stars, rounded up to 5 for the purpose of this platform.

You can get this challenging, unique high-level module here on OBS!