Fane of the Undying Sleeper 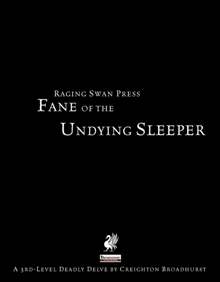 This module by Raging Swan Press clocks in at 27 pages, 1 page front cover, 1 page advertisement, 1 page editorial, 1 page ToC/how to use, 1 page advice on reading statblocks for novice DMs, 1 page SRD and 1 page back cover, leaving us with 20 pages of content so let’s take a look!

This being an adventure module, the following contains SPOILERS. Potential players may wish to jump to the conclusion.

All right, still here? Via one of 3 different hooks, gathering information, one of the 8 rumors provided or the like, the PCs find out about a particularly nasty set of slimy stairs on a wind-swept beach, accessible only during particular low tides and sure to pique the interest of fortune seekers. Said beach btw. comes with a short table of discoveries to add further detail to the shore…but it doesn’t end there – the little dungeon than follows maintains this level of detail and even surpasses it by quite a bit. But let me give you a sample here – each room comes with a small description for the DM, followed by entrances and things players may perceive or miss, followed by read-aloud text and then features – from illumination, to terrain features and e.g. doors (including hardness/break-DC etc.) to dressings galore and infos gleaned via a vast variey of skill-checks, the level of detail is staggering and surpasses even most of Raging Swan Press’ other offerings. Throwing pews, looking at various carvings – there is a vast amount of mood-setting going on here that ampsup the ante of what to expect by quite a bit. Indeed, the best thing here beyond that might be the fact that the presentation is so concise you can run this module sans preparation, just reading as you go. I did try that and it worked, with one minor caveat, to which I’ll come later.

So what’s the deal about this little dungeon? Well, it once was the center of worship for an unholy union of sahuagin and skum, brought together by the mutual veneration of dread Dagon. As is wont to happen with many a twisted cult of different races and/or beliefs, squabbles broke out that saw this particular fane deserted and a sahuagin imprisoned alive – not any sahuagin, mind you – much like other creatures herein, said being had the deformed template applied and is by now a skeletal champion. The theme of encroaching doom is enforced by the exceedingly short time-frame the PCs have to explore the complex – the tides are rising! Much like Raging Swan Press’ “Dark Waters Rising” or 4 Dollar Dungeons’ superb “Horn of Geryon“, the tides influence the areas significantly and make the task of the PCs harder. In Raging Swan’s trademark ease of using anything they put out, one handy page sums up just about all the necessary rules for the DM to handle this situation with varying levels of water-height. It should also be noted that the focus is different here – where the aforementioned modules used tidal tracking either as a global changer of certain areas or as a timer, here, while also a timer, a particularly nasty skill-challenge the PCs face might actually unduly and hastily increase the hassle they face -woe onto those who face Dagon’s wrath! Exploring the fane doesn’t end their troubles, though, as Dagon cultists may follow up on their exploits! Oh, said caveat – the pdf also introduces spell fragments, essentially magic-themed haunts that may end up doing…something. Per se a great idea, but their integration in the otherwise flawless layout could have been a tad more easy on the DM, with the standard text being bolded so the DM knows where these things are prior to reading the text.

The pdf also provides the deformed creature template and 6 pregens for the intended level 3.

Conclusion:
Editing and formatting, as I’ve come to expect from Raging Swan Press, is top-notch, near flawless. Layout adheres to RSP’s two-column b/w-standard and does sport a nice, if not particularly awe-inspiring map (no player-friendly version included), but the official homepage does sport the artwork as a hand-outs pack for layers – AWESOME! The pdf comes fully bookmarked and in two versions – one optimized for the printer and one for screen-use.

Creighton Broadhurst, mastermind of Raging Swan Press, knows how to craft SUPERB modules – he has proven that time and again. This one is per se no different – I currently have next to nil free time on my hands to prepare anything, much less write my intricate, insane plots and thus, this module fit the bill. I tried running it and it worked exceedingly weell, with one minor hick-up – without preparing ANYTHING.

This, ladies and gentlemen, sets the bar higher for similar modules – go and play indeed! Now that being said, I do have some minor complaints – one being that the fane baackground story remains somewhat elusive to the PCs; slightly more means of unearthing it (and tying that to solving the module!) would have been great to see. Another minor gripe I have here is the difficulty, or rather lack thereof – the module does an exceedingly awesome job of creating this atmosphere of dread, decay, looming doom and finality via the encroaching tides…and doesn’t, difficulty-wise, follow-though…with the exception of the boss, who, for once, is actually hard and had my players scared for a bit. Now I’m aware my players are much worse than most gaming groups, but a more linear difficulty/threat-curve with a slightly less pronounced difficulty-spike would have helped the pacing of the module. My players stumbled into the boss relatively quickly and were shocked and then expected something EVEN WORSE coming soon…which simply didn’t. Now bear in mind, this is criticism on a high level. This module still had my players comment all the time how great the atmosphere was, how detailed etc. – they had a lot of fun.

But it still feels like this one slightly falls short of what it could have been – with a tad bit more rooms, more spell fragments (which are btw- also used in a puzzle that could be brute-forced in alternate ways…), a thread tying e.g. spell fragments tighter to the rest of the complex. Formally, this adventure offers extremely tight fluff and cool crunch to support it…just make sure one of your PCs knows abyssal, or much of the plot will be lost on your players. All in all, a very good module, a tad bit short of true excellence, but still a very enjoyable dungeon crawl, especially heartily recommended for time-starved DMs with a final verdict of 4 stars!

You can get this go-play module and its creepy atmosphere here on OBS and here on d20pfsrd.com’s shop!