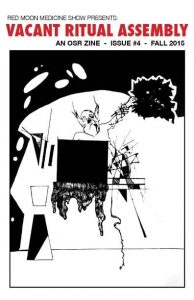 The fourth installment of the Vacant Ritual Assembly ‘zine clocks in at 24 pages, 1 page front cover, 2 pages of editorial/ToC and notes on recommended files/media, 1 page back cover, leaving us with 20 pages of content, so let’s take a look. It should be noted that the pages are laid out in the standard 6’’ by 9’’ (A5) pamphlet style for many OSR-zines, which means you can fit up to 4 pages on a given sheet of paper – in theory. In practice, printing this one out yielded issues for all printers I used, which may be relevant to your interest. I am not penalizing the pdf for that, though.

We begin this issue with an article on “The Abstract” – no, not the general notion, but rather an etablissement where dope-fiends, disgraced scholars and other patrons cavort in the hazy twilight. In short, this sounds like my kind of place. Here, you can meet Albertus Crowe, leader of the esoteric Severn Circle, Gretchen Silt, the rather wealthy “whore of Sable Priory”, a man caught in the lotus-dreams of Narcosa (nice nod to Rafael Chandler et al.’s massive community project) and the dope-victim Vole, ever stumbling around on errands for his fugue masters. 8 esoteric discussion subjects and a nice artwork kinda made me actually want the place and its eclectic crowd to be real. For one pace, this is an impressive little section.

Speaking of Narcosa – we get a mini-adventure in the setting next, namely “The Lotus Eater” – to briefly discuss it, I need to go into SPOILERS. Players should skip to the Spoiler-end.

Only referees reading this? Great! So, Francolo Pennington is a young and privileged dilettante, escaping his rather overbearing family with Amber Lotus – however, his dreams have become persistent between highs, and so he fashioned himself Czar in his own narcotic dream. If you’ve played “What Remains of Edith Finch” – it’s that type of scenario, only that his physical body remains comatose and alive. In order to “free” the lad, the PCs will have to physically kill his avatar in Narcosa! We get a one-page handout (well-crafted!) and a 1-page hex-map, as the PCs explore this part of the ephemeral drug-vision land! Strange villagers, sporest of the smoke wolf (yes, with stats) and weirder things (particularly if you have the FREE Narcosa-book!) await, and we even get some rumors! The PCs, ultimately, will make their way to the Godhead Citadel, the symmetrical, head-shaped (smoke billowing from the eyes) lair of the Czar, where he makes for a nice boss. Really cool mini-adventure! While the maps don’t come with a player-friendly, key-less version, I still was rather happy with this one.

A guest joint venture with Anxious P is up next, with the Oolai Cloth-Skins and Blackhides as two cultural traditions, where alligator priests sew magical cloth in strange rites to select few; 6 different magical effects are presented alongside 4 different drawbacks; where regular cloth-skinning leaves parts of the body exposed, Black-hiding essentially creates a warrior/killer-caste of folks sewn, from head to toe, into magical black alligator hides… 4 different prices demanded by the Oolai sewers are included. INSPIRED! I adored this grim and twisted little article. My one complaint here would be that it’d have been nice to get a suggested approximate SP-value for these…services.

After this, we take a look at another mini-hex environment, the barbarian territories, where three dreaded barbarian tribes loom; Glacierhorde, Skiverhorn and Gnashmaws. The first worship mighty Ghosthide (lavishly depicted in a great b/w-artwork!)…and much like the other tribes, we get multiple stats for members and “gods” of the tribes; for the sSkiverhorn, that would be Impalor, the Armored Death, a triceratops-y godbeast. Gaining favors from these titans is noted, as are mechanically-relevant benefits from doing so. If you’re playing e.g. “Wolf Packs and Winter Snow”, then this should be a must-have section; even if you don’t, it’s very much worth getting, ending the content section of this issue with a summa summarum verdict of all killer, no filler.

The interview this time around is with none other than David McGrogan.

Editing and formatting are back to a more precise standard than previously. Layout adheres to a 1-column b/w-standard and artworks and maps are surprisingly copious for a humble little ‘zine; as a whole, aesthetics-wise, this is pleasant indeed. The pdf has no bookmarks, however, which serves an unpleasant comfort detriment.

After the disappointing third issue, Vacant Ritual Assembly is back with a bang! Clint Krause and Anxious P deliver one amazing little ‘zine that oozes ideas and cool things in every single component. The Narcosa-adventure is suitably weird and does not suffer from last issue’s magic item inflation; stats are precise and the writing is smart – this is by far the best Vacant ritual Assembly installment I’ve covered so far, and is definitely worth checking out if the weird and outré are even remotely to your tastes. Considering that this pdf is super-inexpensive, I feel justified in rounding up from my final verdict of 4.5 stars. Were it not for the lack of player-friendly versions of the maps (srsly – this has really nice ones for a ‘zine!) and bookmarks, this’d have received my seal of approval sans hesitation. Definitely recommended!

You ca get this inexpensive ‘zine here on OBS!

Missed the insanity that is Narcosa? You can find it here! (It’s btw. FREE!)