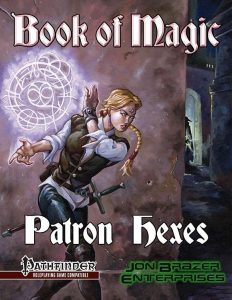 This installment of the Book of Magic-series clocks in at 16 pages, 1 page front cover, 1 page editorial, 1 page SRD, 1 page advertisement, 1 page back cover, leaving us with 11 pages of content, so let’s take a look!

Know what I really dislike about the base patron class feature? It’s not nearly as diversified and meaningful as it should be – as such, I have very much welcomed the introduction of patron-exclusive hexes, which btw. also help to potentially balance the power-levels of different patrons. This pdf then, provides a whole selection of such patron-specific hexes. After a brief introduction that also explains how to use this pdf, we begin with the hexes; we get two excludive hexes per patron covered, plus a major hex for each of the patrons. With over 25 patrons covered, that makes for quite a lot of hexes. Patrons from Advanced Player’s Guide and Ultimate Magic are covered. Where duration extension via cackle is possible, the pdf does note so explicitly. Let’s take a look!

We begin with Agility, which allows you to temporarily redistribute 10 ft. of movement to another character or decrease a target’s speed to 5 ft. for a round. The latter hey fails to specify how it works, though – does it require a touch attack? Has it a range? No idea. The major hex is really potent, allowing for move action short-range teleportation. The ancestors patron provide a fear-based short-range debuff and a brief, communion-based bonus to a Knowledge skill. The major hex is pretty potent, granting a wild-card hex from an ancestral witch. Personally, I’d put a hard limit of uses on this one to account for the superb flexibility. Not taking this hex would be insane RAW.

Animal is amazing: A target within 30 ft. sneezes a dire bat from the nose, which proceeds to attack the target, then turn into mucus that provides a brief atk debuff. Issues here: A Dire Bat is Large. What if it can’t fit in the space? Making this one an abstract effect instead of a quasi-summoning with all the issues that entails, would have been wise. The second hex allows for the temporary addition of the Giant Creature template to the familiar. The major hex, comparatively, is underwhelming. Become the same type of animal as the familiar? Okay. Death provides a fear-based, scaling debuff…that lacks the caveat that it’s a fear-based, mind-influencing effect. The second hex causes 1d8 + witch level negative energy damage with a touch, granting the same amount of temporary hit points. A target may only be affected once per 24 hours, but still – hand me my trusty bag of drain-fodder kittens to leech, I need my temporary hit points shield back. *sigh* The major hex imposes temporary negative levels on a failed save and continues to do so on subsequent rounds, capping at Int-mod.

Deception is interesting, but weird – it makes a target within 30 ft. look like the witch; allies must make a Will-save or be convinced that the ally is the witch, which is kinda odd, since the witch retains RAW her appearance. Glibness nets a Bluff skill boost with a daily cap. The major hex can make targets believe that its surrounded by endless copies of the witch. The hex should probably be codified as an illusion or mind-affecting effect. Elements nets either cold or fire resistance via eerie flames or relay short messages to targets, who may also reply at 5th level – discreetly, of course. The major hex allows for the witching of the 4 core energy types between prepared spells. I really liked this one!!

Enchantment is a save-or-suck that can force an enemy to attempt to help an adjacent foe. Instant friends is somewhat problematic, as it assumes Diplomacy to change attitudes to be quick – which it isn’t unless you take a huge penalty to the check. The major hex allows for the redirecting of enchantments. Endurance allows for the removal of fatigue and transfer of the condition to another target. This is broken. It allows for rage-cycling, provided the witch has a bag of kittens to transfer fatigue to. The second hex is a bland -2 to fort-saves for 1 round. On a failed Will-save. The major hex nets a scaling natural AC bonus and an Intimidate bonus due to warty skin. Healing provides a short-range stabilizing with minor healing (bad choice of your standard action…) and the second hex provides temporary hit points. The major hex can heal temporary ability damage or drain to one score.

Insanity lets you suppress fear effects or cause brief confusion. The major hex causes up to Int-mod creatures within 60 ft. to lock down and take nonlethal damage. No actions, though on a creature’s turn, this can be shaken off. This is very potent, as it can prevent immediate actions RAW. The hex-caveat prevents it from being broken, but I’d restrict this one to the highest levels due to a lack of initial saving throw. Light provides untyped damage versus undead, which stacks with channeling – interesting. As a nitpick – should probably be positive energy damage. The second hex nets zone of truth at touch range. The major hex causes reliable blindness – light sensitive targets take negative levels and on a failed save, the blindness is actually RAW permanent. Moon lets allies grow claws (damage type properly codified; I assume primary natural attacks as per default). The second hex lets you steal darkvision. The major hex provides a pseudo-lycanthropy buff.

The occult patron hexes comes with steal voice and turning undead. The major hex provides scaling undead anatomy for allies. Plague can fortify targets versus disease or cure them, or cause targets to become sickened – no save. The major hex lets an ally cause the sickened condition via attacks. Portents allows the witch to choose a target nearby and take the aid another action: The first ally to attempt an attack against the target gets the aid bonus. The second hex nets a skill bonus for a target. The major hex provides Int-mod forced rerolls, taking the worse result. This should probably have a 1/day per target caveat, analogue to misfortune.

The shadow patron can bestow a creature some control over its shadow, using it as a scout – this is tight and well-balanced. One of my favorites within. The second one is a ranged trip. The major hex deals major Strength damage, half on a successful save. The amount inflicted (1d6 + ½ witch levels) is overkill for save halves and the high save DC of hexes.

Spirits can provide a Perception bonus after communion, and a variant summon monster with the spirit creature template (included) added to the summon. The major hex provides an omni-magic circle that only true neutral folks can bypass. Stars provide a +1 luck bonus to attack, and may only a affect a target once per day, which is strangely underwhelming compared to e.g. fortune. Odd: Dazzling a target (weakest condition) is upgraded to dazed at 5th level…strange progression. The major hex adds +1d6 fire damage to ranged attacks for an ally, stacking with flaming et al.

Strength nets a short-range ranged bull rush governed by Intelligence (like all ranged combat maneuver hexes within) and may sap Strength from a target via touch. The major hex reduces a creature’s Strength to 1 on a failed save , by 1d6 on a successful one. While it can only be used Int-mod times per day, it should definitely have a caveat that it can’t affect a target twice per day. This is otherwise save or suck for brutes like giants, dragons, etc., and the damage on a successful save on its one can cripple most melee targets quickly otherwise. Time provides a physical attribute debuff…and has a super broken second hex: Touch a target, steal the next standard action and bestow an additional attack action (this could be a Vital Strike, you know…) on a target. Hand me my trusty bag of kittens! This time around, I won’t even have to kill them, just steal their time. This needs to die in a fiery blaze. Oh, major hex? 1 round TIME STOP. WTF.

Transformation nets enlarge person or an enhancement bonus for the weapon touched, with 7th level granting a +1 equivalent special weapon property. Okay, I assume in addition, right? The major hex temporarily transforms targets into harmless animals. It should specify being a polymorph effect. Trickery makes the target confuse friends and foes for Int-mod rounds – saves don’t end the effect and the hex lacks a range. The second hex allows for the touch-based reduction of AC bonuses granted by armor or shields. The major hex requires up to two saves – it fools the target to believe they’re covered in creepy-crawlies. If the first fails, the target is paralyzed; if the second fails, the target attacks itself. Should specify being a mind-affecting fear-effect.

Vengeance comes with a negative energy shield that can cause damage to targets hitting the witch in melee. The second hex forces a creature to attack an ally with the same attack that hurt the witch or her allies on a failed save. The major hex is a properly codified death effect, usable 1/day, that inflicts 10 times witch level damage. Oddly, still 1d10 per witch level, which is, comparatively, overkill. Water provides temporary swim speed plus water breathing and scaling DR. The major hex is odd, making the target gain an eel-like blessing: Electricity damage is halved (not how that usually works in PFRPG) and if the effect allows for a Reflex-save, the target is basically treated as having evasion. Additionally, hitting the target in melee causes electricity damage.

Winter provides save-less blindness lock-down within 30 range. This should have some form of limitation. The second hex slightly reduces speed, by 5 ft. Notice the power-discrepancy? The major hex provides a slow-causing blizzard (wind strength not noted, I assume blizzard standard) that the witch can move around. Wisdom, finally, can yield calm emotion or a debuff to Wisdom via touch. The major hex nets 12 + witch level SR – which can be misread to not have a fixed cap due to a verbiage guffaw.

Editing and formatting on a formal level, are very good. On a rules-language level, the material is inconsistent, though. Layout adheres to a two-column full-color standard and the pdf has stock interior artwork – I’ve seen all pieces used multiple times before. The pdf comes fully bookmarked for your convenience.

Dale McCoy Jr. usually does better. The patron hexes herein feature a couple of truly amazing visuals and cool ideas…but at the same time, their internal balancing is really, really odd. There are a couple of hexes that frankly suck, and some that are UTTERLY OP. Reliable, save-less enemy lockdowns, a bunch of failed kitten-tests (can you abuse the ability with a bag of kittens?) and inconsistently applied classifications for effect types that make interactions potentially odd mar what could have been a solid, enjoyable offering. There are some really cool tricks herein, but once you start to analyze the details and compare the patrons (yes, I took spells into account to judge viability of the hexes), you’ll still arrive at a flawed book. While this does contain a couple of gems, it also sports more than a few problematic hexes – and, when listed, the problematic ones exceeded the ones I really loved in number. Hence, I cannot round up from my final verdict of 2.5 stars.