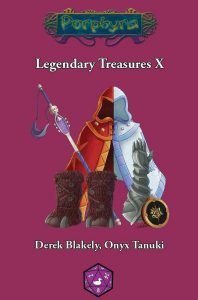 This installment of the Legendary Item-series clocks in at 45 pages, 1 page front cover, 1 page editorial, 2 pages of SRD, leaving us with 41 pages of content, laid out in 6’’ by 9’’ (A5), which means you can fit up to 4 pages on a given sheet of paper when printing this.

Now, in case you’re not familiar with the series: The Legendary Items pioneered by Purple Duck Games have influenced my own games to an extent that only very few series have achieved. The idea is simple: I don’t know a single player who *really likes* the throwaway magic economy; we know, from a ton of books, the notion that magic items slowly awaken with the power of the wielder, right? That’s basically legendary items – magic items that begin with a certain power-level, and then grow in power with characters, remaining relevant and often unlocking unique abilities.

Legendary items range in power-levels from 5 to 10, though most have 5 steps in advancement. These items do have base forms – for most beings, they act at their base capacity, but if you meet the prerequisites of the item, you can begin unlocking the powers. Saving throw DCs, if any, use the wielder’s highest mental ability score modifier to calculate save DCs. Non-SPs that allow for a save have a DC of 10 + ½ the wielder’s level + the wielder’s highest mental ability score modifier. For the purpose of CL of any effects, the wielder’s level is assumed to be the items CL. The pdf does suggest a variant rules for jealous items, which prevents hoarding of items.

We begin with the cloak of protection. Yes, exactly. No, not the ones you already know. The cloak presented here does indeed improve from +1 to +5, as expected – however, beyond that, the storied item also nets you endure elements and 1/day swift action resist energy (cold or fire) at 4th item level. These effects become an aura at higher level and the SP is upgraded to being communal. Scaling SR and, at highest level, resistance versus all elements are added. It’s interesting – a bit of story and some fun modifications and one of the most maligned and boring items ever suddenly is interesting.

At this point, it should be mentioned that we get gorgeous, often spanning a whole page, full-color artworks to accompany the background stories of these items! The construct bane scarab begins with detection of constructs; then gets the scaling ability to bypass hardness, and at higher levels, starts working as a golembane scarab and builds on that, enhancing the wearer’s attacks versus golems…and it learns to mitigate spell resistance of constructs, reduce their natural armor, 1/day negate a special attack of a golem (sans action – should probably be spelled out!) and even get a retaliatory aura. Cool!

The gauntlet of serpents comes with poison resistance, a fully statted clockwork snake (that works akin to a variant of the eminent iron cobra, improving over the levels) and the ability to get more of these deadly tools, add spit attacks to them, etc. Cool! Minor nitpick: It would have been easier for less experienced GMs and players to have an increase in die progression spelled out with an example, but that is nitpicking.

Mammoth boots enhance your overrun capabilities, but also make you louder, hampering Stealth somewhat. Gaining trample as though large, counting as a bigger size category for CMB and CMD and temperature adaption make sense – and yes, as a capstone, we get a mastodon form – which has its own hit point pool! I *love* this – it’s so simple, yet cool, and is something I wouldn’t object to seeing more often!

Neria’s Dreamsling is a sling staff that gets abundant ammunition and the ability to modify the enhancement granted to the weapon via a ritual into special weapon properties. Firing scaling boulder bullets that are actually phantasms and acting as a staff of slumber complement a well-written item that has its own, distinct identity.

The robes of the battlemonk come with a pretty powerful first level ability that has some issues regarding the rules-language: “When worn, it allows its wearer to make a 10-foot adjustment whenever she can normally make a 5 foot adjustment. This ability can be used to allow the wearer to make a 5 foot adjustment into rough terrain.” So, first of all, that should be 5-foot step. Secondly, 5-foot stepping in difficult terrain is really potent. That one should probably be relegated to its own ability. Changing base physical damage types with unarmed attacks. Weird: The prerequisites note flurry of blows or brawler’s flurry, but the 6th level ability grants you monk class features at 2 levels higher: AC bonus, speed or unarmed damage…so, what about brawlers? Do they get other benefits? Do they get the monk benefits at full character level +2? The item feels less refined than the others so far, extending to slightly cumbersome verbiage instances like “…gains the monster universal ability, pounce,…”, which would usually read “…gains the pounce (monster) universal ability…” – not bad, mind you, but it’s noticeable. This unrefined nature also extends to e.g. Sonic Kick, which can’t seem to decide on whether to inflict untyped bonus damage or force damage. (Why not, you know, inflict…sonic damage??)

The Robe of the Sovereign Mage is a combined robe of armor and robe of resistance. Minor CL-bonuses and SR are spinkled in, and two potent capstones are added on top. The capstones are interesting, but come imho too late – the item is pretty bland, particularly in contrast to the more versatile and organic cloak of resistance.

Witches and shamans can take a look at the Sack of a Thousand Fetishes, which enhances curses and nets cackle/chant, respectively, otherwise acting as a cackling hag’s blouse. Patron/spirit enhancement, additional curse spells, better cackling/chant hex enhancement…I liked this one!

Vailoaria’s Northstar Rose is mechanically interesting, in that it represents a wayfinder that gains additional ioun stone slots, apport-based sending SPs, dimension door, contingency-esque spell storing…and the item’s abilities tie in with the ioun stones in a unique manner. Mechanically, this is by far the coolest and most interesting item within – two thumbs up!

Finally, there would be Zaidyne’s Chaplet, an item intended for kineticists, allowing for the rough identification of kineticist wild talents via Spellcraft. Scaling kineticist’s diadem functionality, storing a blast (with metakinesis and infusions!) in the chaplet. Composite blasts, hollow rod functionality – the item shows that the authors knew what they were doing, accounting for the dense and complex rules-language of the kineticist’s engine – we end the pdf thus on a high note, with undoubtedly the item that highlights the most design skill within.

The pdf comes with a bonus pdf penned by Mark Gedak and Perry Fehr, depicting the owl-like Strigifal agathion at CR 9 – with wing and claw attacks, true seeing and the ability to generate blizzards, which, not unlike vrock dances, can be used cooperatively, these beings are a cool critter with a nifty artwork.

Editing and formatting are good – while I noticed a remnant [i] here and there, formatting and formal categories are generally tight. On a rules-language level, the pdf is precise for the most part. Layout adheres to Purple Duck Games’ booklet-style 1-column standard, is printer-friendly and the pdf sports a surprising array of amazing full color artworks for the items. The pdf comes fully bookmarked for your convenience.

Derek Blakely and Onyx Tanuki provide a neat selection of items within, though the imaginative potential and precision does oscillate a bit: Reading inspired pieces back to back with e.g. the bland robe of the sovereign mage felt a bit jarring to me. That being said, there are a couple of true gems within, with the final two items deserving special mention. As a whole, the pdf is very much worth getting for the fair asking price. My final verdict will clock in at 4 stars.

You can get these cool weapons here on OBS!