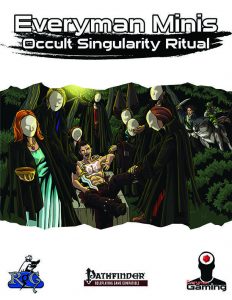 So, this pdf depicts a new occult ritual, if the title and cover were not enough indication. I know, captain Obvious-Endzy is obvious. The ritual presented here is the Macabre Pledge of Occultic Singularity, which clocks in at 5th level and has the compulsion and evil descriptors. The ritual has a 5 hour casting time and its components are amazing and manage to generate the appropriate flair: 18 black candles, infused with the ash of those sacrificed to the cult’s object of veneration; identical regalia for primary caster, secondary caster and target; a feast worth of food etc. – and an “alter” (should be “altar”) adorned with ebony, onyx and obsidian. Come on, you can picture that ceremony, right?

The ritual must be performed outdoors when the sun doesn’t shine. Each member of the secondary casters is designated a role in a hierarchy for the ritual, recognizing 4 different ranks. Unlike most rituals, this one acts as a party of sorts, requiring 10 secondary casters per skill bonus. It should also be noted that the hierarchy is not cosmetic – it determines who can contribute. The ritual includes an eerily wordless bacchanal of debauchery as candles are lit and the targets are painted with cultic symbols and signs. Those affected by the ritual, secondary casters and targets,a re bound to the primary caster, which makes scrying attempts reveal all members, but also a nasty backfire. Secondly, all non-primary or secondary casters are rendered helpful to the cult’s cause and ideology in a super-potent form of brainwashing that is really hard to cancel. The primary caster may use witness as a SP, with a massive range of 1 mile per caster level, targeting members of the ritual at will. This allows the primary caster to transfer bardic performance effects, spells of 4th level of lower with a range of touch, short, medium or long to the target as if adjacent to it. Worse, members that vanquish others in combat can dominate their victims. The ritual also has no less than 4 different means to enhance the ritual beyond the basics. Utterly, utterly creepy.

Conclusion:
Editing and formatting are very good; apart from the one type, I noticed no issues. Layout adheres to Everyman Gaming’s two-column b/w-standard and the pdf sports a nice full-color artwork. The pdf has no bookmarks, but needs none at this length.

Clinton Boomer delivers a super-creepy, amazing ritual here: the ritual itself has a strong Eyes Wide Shut-ish vibe and can be considered to be almost Lynchian in its visuals. The consequences of it are potent as well, adding a gloriously paranoia-inducing sense of omniscience to the proceedings. The conversion of targets just adds to the glorious conspiracy vibe this evokes. In short: The supplement can really make a cult that is “just another cult” stand out and become a force to be reckoned with – potentially changing the dynamics of whole cities and environments. In short: This is a glorious narrative tool and well worth 5 stars + seal of approval.

You can get this inspiring ritual here on OBS!