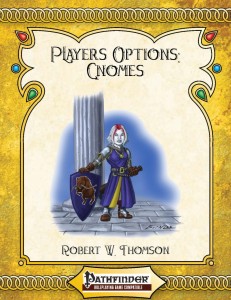 This installment of the Player’s Options-line is 12 pages long, 1 page editorial, 1 page SRD, leaving us with 10 pages of content, so let’s take a look!

Following the format of the series, we kick this off with two new variant gnome races, first of which would be the Blood Gnomes – tainted by the blood of redcaps, they essentially are the gnomish equivalent for Tieflings – shunned and considered evil by most and stigmatized as well as rare. They get +2 to Dex and Wis, -2 to Cha, count as fey, are small and slow, get light-light vision, DR 5/cold iron, +2 to saves vs. illusions, take 5 penalty less to stealth when moving (and may run stealthily at -20), get +1 DC to necromancy-spells and Blood Gnomes with Wis of 11+ can cast bleed, chill touch, detect poison and touch of fatigue 1/day. They also gain proficiency with scythes in addition to the gnomish weapon proficiencies. While not horribly broken, the DR and unnecessary amount of spell-like abilities imho detract slightly from this race’s balancing.

The second variant is also a tad bit sinister – the Shadow Gnomes (which would fit well with Jon Brazer Enterprise’s Shadowsfall) are touched by the plane of shadow and hence get +2 to Dex and Int, -2 to Str, slow speed, darkvision 60 ft., light sensitivity, resistance 5 to electricity and cold, increase their miss-chance in dim light to 50%, always get Perception and Stealth as class skills and gain a bonus feat at 1st level, reduce the Stealth-penalty when moving by 5 and by 10 when sniping, +1 DC vs. shadow-spells and 1/day ghost sound, pass without a trace, ventriloquism. They also get familiarity with kukris in addition to gnomish familiarity. Honestly, this variant is also too high on the power-scale for my tastes – not by much, but the increased miss-chance combined with 2 class-skill and the improved stealth feels like too much when combined with the spell-like abilities. Also, this race is very much geared towards being rogues – a slightly more diverse focus would have been nice. Also, the spell-like abilities have not been italicized.

A total of 14 feats is up next: Among the feats, summoning monsters 1/day and gaining additional uses of their spell-like abilities are possible. Feats that net you +2 to saves versus illusions, +1 to initiative and one save of your choice, +1 to DC of your spell-like abilities, treating your craft and profession as two ranks higher for crafting purposes – you get the idea. Generally, these feats are highly specific and where the races are too strong, the feats generally are too weak. With one exception: One feat easily nets you Hide in Plain Sight (!!!) with a caveat that larger sized foes must watch you – even with this caveat imho broken.

Much like previous installments, the 6 new flaws are roleplaying gold and deliver plenty options to develop.4 gnomish items, from gnomish absinth and clockwork hurdy-gurdys to massage oil and toys are reprinted herein is well, making for more worthwhile content to round out the pdf.

Editing and formatting aren’t perfect – especially the flawed italicization of spells/spell-like abilities hits a pet-peeve of mine. Layout adheres to 4WFG’s two-column b/w-standard and the full-color artworks for the gnomes are nice, the b/w-illustrations for the items awesome. The pdf comes fully bookmarked for your convenience.

This is by far not the worst of the installments in the series – Robert W. Thompson has delivered some cool concepts – though honestly, I still don’t consider these alternate races balanced and the feats in this installment are uninspired filler – not in their cool fluff, but in their utterly forgettable crunch. The flaws and items are awesome, but make only up a fraction of the content – hence, I will once again settle for a final verdict of 3 stars.

Want to get the whole Paths of Power II: Paths of Blood subscription? You can get it here on OBS and here on d20pfsrd.com’s shop!