EZG reviews B14 – The Battle for Bridgefort 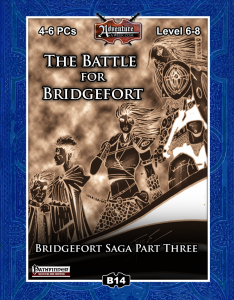 The third part of Curtis Baum’s Bridgefort-trilogy (after B8 and B12) is 36 pages long, 1 page front cover, 1 page editorial/ToC,1 page SRD, leaving us with 31 pages of content, so let us take a look, shall we?

All right, still here? After exploring some ruins in “The Right to Arm Bugbears” and reclaiming stolen magic items (the theft happening in “Thief in the Night”) the PCs have unearthed news of an impending attack and thus returned to Bridgefort. There, they will be invited to a planning-session where the Baron Tavius Mercen IV will introduce them to Kytty Silverstar, a traveling entertainer, Leonne Silvertear, the local high priestess and Rcane Shapemaster, the local mage merchant. Nomenclature-wise, not that impressed here – Rcane Shapemaster? Really? Also: Twice “Silver” in the surnames will just confuse the players and make the two harder to tell apart. But enough nitpickery – the strategy-meeting concludes with the PCs negotiating their terms and the Baron announces he’ll destroy two of Bridgefort’s 3 bridges to increase the odds of preventing the approaching humanoids from crossing the stream.

The first battle will be fought at the gates of the west district- and preparation-wise, it is rather cool: For the PCs get a puzzle to reinforce the gate in addition  to Knowledge engineering checks. And after that simple one, we get a first so-called “Dynamic battle” – the (fully mapped) encounter takes 10 rounds and its success or failure is determined by the amount of foes the PCs can kill – as the bugbears and orcs try to destroy the gates with their battering ram, the PCs should endeavor to keep their allies alive as well while drawing fire, raining death from the walls and preventing their flanks from being overrun by humanoids that have entered the city. Damn cool combat here! It should also be noted, that each dynamic battle can result in win, draw or loss, thus granting boons or penalizing the PCs in the final encounter.

The second battle is slightly less epic, but also has interesting winning conditions – when bugbears empowered by flying potions cross the walls, the PCs will have to repel them and rally the panicking guards while ensuring enough of their allies survive. The second skirmish has the PCs crash a significant amount of summoning spells by hobgoblins.

The final conflict will have the PCs defending the last bridge of the city – which comes with an interesting puzzle that will make the final encounter easier, robbing the PC’s foe of his ability to fly.  But before that, the PCs will have to defeat foes upon foes – kobold snipers on dire bats, for example. And they WILL reap what they have sown in the previous two encounters.  The bridge, btw., gets its own map and finally, in the end, face emperor Chez’nak – who turns out to be a rather deadly oni…

As rewards for saving the city, the PCs may actually be knighted and the pdf closes with a map of the city, two versions of the massive battle’s quarter as well as a map of the bridge that serves as the final encounter.

Editing and formatting are top-notch, I didn’t notice any significant glitches. Layout adheres to AaW’s 2-column standard with color-coded boxes and white backgrounds and the artworks are ok. The cartography, as almost always with AaW, is neat indeed. The pdf comes fully bookmarked for your convenience.

Ähem. Well. you see me a bit stumped. “Thief in the Night” felt cut down and a tad bit too easy and simple. “The Right to Arm Bugbears” to me is not a good module, but rather a series of mostly disjointed encounters, which work great on their own, but don’t tie well together and could have used additional development. Well. This one is nothing like that. Yes, it’s essentially a series of fights. With some puzzles sneaked in – but it feels epic. Like that’s what should have been the conclusion to “The Right to Arm Bugbears“. Where both of its predecessors fail, this one delivers. Yes, its story is not that exciting, but it doesn’t need to be – this is about holding a city against a horde of humanoids and the respective encounters are interesting, fast-paced and just plain fun. In fact, I’d suggest you check it out if you’re looking for a fast-paced siege-style romp. (It should be noted that this was released before mass combat rules from UC, so don’t expect mass combat in here!)

That being said, this pdf also has some minor downsides: It’s whole structure is slightly predictable. It could have used one or two additional dynamic battles and some of the nomenclature is groan-eliciting. Still, this is by far the best I’ve seen from author Curtis Baum and well worth a final verdict of 4.5 stars, rounded down to 4 for the purposes of this platform.

You can decide the fate of Bridgefort here on OBS!