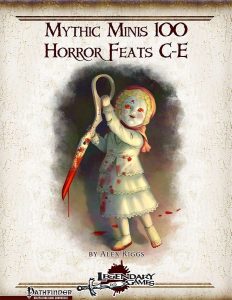 -Clarity of Pain: Adds a bonus on your second roll equal to the amount of damage inflicted. Via mythic power, the damage can be increased to 3d6.

-Consume Essence: Add temp HP to the threshold the swallowed creature when you inflict a negative level. There is no limit on how many you can accrue this way, which is a bit problematic. Also, as a standard action, you can expend mythic power to impose 1d4 temporary negative levels in addition to the other save for being swallowed.

-Deadhand Style: When using ki to empower unarmed strikes, you may also expend mythic power; if you do, increase condition severity to frightened.

-Deadhand Initiate: Allows you to reflect fear-effects back on targets when you succeed the save.

-Disconcerting Knowledge: Affect any base CR. Also add Knowledge to identify a creature as a second roll when using Intimidate to demoralize, use the higher value and if both succeed, you treat that result used for both checks as 5 higher. Decent, I guess.

-Disrupting Fist: You need only 1 channel energy to destroy undead via the feat. As a swift action, you can expend mythic power to wreathe your body in energy for 1 minute, adding +1d6 untyped damage (should be positive energy, right?) versus undead.

-Enemy Cult: Additional uses of the detect spell granted. Upon gaining the completion benefit, you also gain the corresponding protection from as an SP 3/day and may use mythic power to use the appropriate magic circle as a SP as a standard action. That’s a cool one!

Alex Riggs second array of mythic versions of horror feats is a nice collection; it sports some cool and creative ideas and while it doesn’t reach the apex of the series (woohoo – #100, btw.!), it ranks as a good installment, well worth a final verdict of 4.5 stars, though I do feel I have to round down for it.