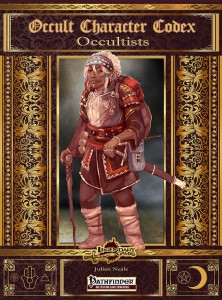 This installment of the Occult Character Codex-series clocks in at 32 pages, 1 page front cover, 2 pages editorial, 1 page ToC, 1 page how-to-use, 1 page SRD, 1 page back cover, leaving us with 25 pages of content, so let’s take a look!

So how were they made? Well, for one, the builds use Pathfinder Unchained’s automatic bonus progression, which means that the characters have a better chance to stand against the PCs sans flooding the campaign with magic items. The builds are not made to be sheer exercises in powergaming superiority that exist in a vacuum, instead championing the approach of making viable characters that work concisely as though they were proper characters, complete with a brief personality sketch, though that component is less pronounced than in Purple Duck Games’ codices. Options and buffs are included in the statblocks, though handy pre-buff sections provide the information sans them, should your PCs be able to catch the character unaware. There are also some minor pieces of advice for GMs using the character

As far as diversity of the statblocks is concerned, there is, particularly concerning the racial variety, enough going on: Tieflings, core races and even wayang and hobgoblins provide an overall diverse array of unique races. As in the previous installments, not all archetypes are covered – this time around, we get battle hosts as well as necroccultists, the latter including a baykok companion. Interestingly, age categories and spell selection appropriate for it, are covered as well – there would be e.g. an old occultist who casts age resistance as part of her buff suite. The pdf also sports the ordo metamorphic mundi, including information on the domains it grants.

Now, as in installments before, there are some builds that look a bit similar at first glance – but there are quite a lot differences once you dive into the nit and grit of the respective statblocks, you will notice diversity – both in skill and feat selection and focus of the respective statblocks. Similarly, implement school choices are diverse and run a relatively broad gamut. And yes, the spell-selection covers a lot of ground and does not restrict itself to doing the same thing over and over – instead, the choices for the characters make sense and emphasize their distinctions.

Julian Neale’s Occultists are refined – as far as the statblocks I looked at are concerned, I saw no glitches and the characters are varied enough to make this a complex and fun collection of statblocks. While I would have loved for the other archetypes to be covered as well, the builds herein are neat, fun and sufficiently distinct to allow a GM to challenge his PCs with significantly different challenges herein. It’s perhaps just me, but I did feel like the characters herein were a bit more diverse than in the previous installments, with different foci. Rock-solid stats, varied builds…what more can you ask for? My final verdict will hence clock in at 5 stars + seal of approval.

You can get this neat collection of Occultist-statblocks here on OBS and here on d20pfsrd.com’s shop!