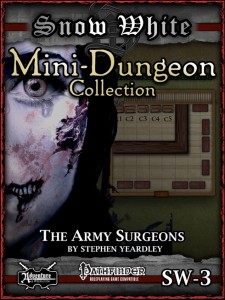 This “mini-dungeon” is actually, much like “The Spirit Bottle” a rather unique set-piece: The Klavekian kingdom is not known for being particularly welcoming regarding the stance towards non-humans – and this pdf puts the players in a situation, where they witness one of the more unsavory practices firsthand: Leikata and Ommella Ruumis are both retired army surgeons – and now they’re part of the Klavekian means to destabilize the “hostile” area called haunted forest, known hiding places of fey and non-humans alike…by controlling and re-animating zombies and sending them inside. The problem is: Something went wrong, big time, and now zombies roam…and the two clerics are locked inside their little abode, trapped by the undead and nearing death – in order to save them, the PCs will have to defeat the undead (potentially enjoying the neat plunder-table included)…and then make a decision…for while what the clerics do is not ethical, to say the least, they still follow orders and provide a service to the local populace by relocating the undead…

Stephen Yeardley’s third mini-dungeon intended as a Snow-White tie-in is interesting mainly due to the moral conundrum and potential for consequences it poses. That being said, beyond the basic idea, it does feel a bit less imaginative than the superb first two Snow-White mini-dungeons, which would mean, I’d usually refrain from slapping my seal of approval on this. However, this is FREE, and as a free offering, it provides a fun, intriguing set-piece, well worth of 5 stars + seal of approval.

You can get this FREE mini-module here on OBS!