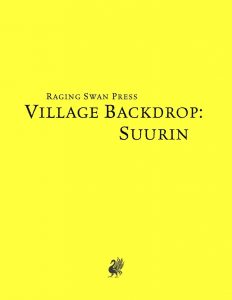 The village of Suurin was once supposed to be an utopian experiment, a place of freedom and peace. Now, the halfling village sports a cadre of hobgoblin enforcers and pretty much everyone suffers from tell-tale black veins (as always, nomenclature and local appearances and dressing habits are covered)…for the little village has been transformed by Devia Brookshire into the Skez capital of the realm, definitely earning the soul-crushing disadvantage that the settlement stats feature. It should be noted that this one does have a market place entry, in spite of being system-neutral – you can actually purchase the drug Skez openly in its various iterations.

Of course, the big unknown here is Skez and, much to my pleasant surprise, no less than three types of the powerful drug have been provided…and yes, even though this would be the system-neutral version, the rules-language employed for them should retain compatibility with OSR-games and pretty much every game that knows fatigue damage, saves, etc. – so yeah, OSR and similar systems are perfectly fine. It’s really nice to see the rules-language employed here being properly modified. Kudos for going the extra mile here!

Jeff Gomez takes us on a trip to an utopia broken by greed, to a pastoral idyll firmly in the grip of the horror of industrialized drug production. The stark contrast between the “good old days” and the tainted reality is intriguing and the fact that even enforcers and the mastermind can be considered to be victims adds another layer of complexity to it. The inclusion of proper rules-representations of the drugs is just a nice icing on the cake. The village itself may have primarily one note, but it is a strong and clear one. I was pretty positively surprised by this one, with the generally applicable, yet precise drug-rules making sense and representing a nice extra oomph here. For this reason, the system-neutral version will clock in at a final verdict of 5 stars as well.

You can get the system neutral iteration here on OBS!