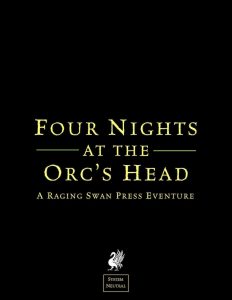 But I digress: The book then proceeds to present customers via a d10 table supplemented by a whole paragraph of flavor contextualizing these individuals. There are no stats provided for them, but the classes referenced have been properly adjusted to old-school aesthetics. 5 members of staff are presented in a similar manner, and there is a pretty neat d20-generator that lets you determine mood, level of inebriation and activity of the individuals. A bit of a bummer: Raging Swan Press has this great Barroom Brawl supplement for PFRPG, and this version references it as the supplement to get to run such brawls. While said supplement is not exactly super-crunchy, its levels of intoxication would have been relatively easy to translate to old-school games – or some text-only guidance would have been nice. Bit of a bummer there.

Creighton Broadhurst’s first eventure is a SUPER-useful supplement. Getting a compelling, interesting tavern, with several fleshed out nights for the GM? That’s awesome, and nigh universal in its applicability. I adore this supplement as a person. And, well, this is the system neutral version – I can’t well complain about a lack of crunch in it, now, can I? As such, I consider this version to be a resounding success – 5 stars + seal of approval.