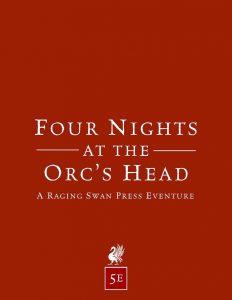 But I digress: The book then proceeds to present customers via a d10 table supplemented by a whole paragraph of flavor contextualizing these individuals. There are no stats provided for them, instead referencing 5e’s default NPC statblocks. 5 members of staff are presented in a similar manner, and there is a pretty neat d20-generator that lets you determine mood, level of inebriation and activity of the individuals. A bit of a bummer: Raging Swan Press has this great Barroom Brawl supplement for PFRPG, and this version references it as the supplement to get to run such brawls. While said supplement is not exactly super-crunchy, its levels of intoxication don’t work that well for 5e. Bit of a bummer there.

Creighton Broadhurst’s first eventure is a SUPER-useful supplement. Getting a compelling, interesting tavern, with several fleshed out nights for the GM? That’s awesome, and nigh universal in its applicability. I adore this supplement as a person. As a reviewer, there is but one real complaint I have: The supplement is essentially system neutral. There is not a single DC for social skills, hearing rumors or the like herein. The reference to a supplement for the wrong system also bothered me – a quick sidebar with rules for 5e wouldn’t have taken up much space.

That being said, this is still an excellent, super-useful supplement, which is why my final verdict will clock in at 4.5 stars, but rounded down for this iteration.

If you consider my reviews to be useful, I’d appreciate a donation, or joining my patreon. Thank you.