What Lies Beyond Reason Player’s Guide

What Lies Beyond Reason Player’s Guide 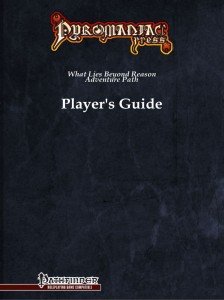 This freshman offering by Pyromaniac Press clocks in at 18 pages, 1 page front cover, 1 page editorial, 1 page SRD, 1 page back cover/KS-advertisement, leaving us with 14 pages, so let’s take a look!

We begin this player’s guide with a brief introduction of the fully statted eternal city of Anduria, which is btw. also featured in the rather neat map of the lands surrounding its monolithic, titanic walls. Anduria…ringed by 100 feet high walls of unknown, strange stone featuring enigmatic bas-reliefs of strange robed figures (stunningly rendered in the prequel-module, btw.!), a patchwork of the old and new, with its canals and even single building sporting different architectural styles, certainly is a metropolis that can be called fantastic in the best of ways and the players reading this guide will get to know at least the basics about the diverse wards within these colossal walls.

Since adventurers are prone to seek out taverns for employ, trouble and ale, 10 particular taverns are spotlighted in aptly-written, concise prose and the reader of this pdf will also be filled in on the government and the guild-driven power-structure within the city…and obviously, as a consequence, also be able to familiarize oneself with the guilds, both great and small – the respective write-ups sport names, primary services rendered, the guild master, membership requirements and benefits and thus a massive array of potential roleplaying opportunities.

Both daily life in the massive city and its culture is well represented, including the relatively humane punitive measures employed within the city for law-breakers – and yes, this section also mentions common strategies to weasel out of a law-based predicament.

Local “pests”, psychic motes and transportation within the city’s confines is covered as well and a brief note on surrounding areas is also featured here. The second section features thankfully spoiler-free advice for making characters that actually will be useful in the campaign, including suggestions for bloodlines, etc. Anduria, being a tolerant city, does not extend this tolerance to the divine, thus, such characters may require to hide their calling (If you want to know why, that’s explained in the plot of the AP in more detail…) and new skill uses to this effect as well as ones that let you navigate the city’s red tape are provided.

The pdf ends with a couple of per se pretty solid traits, though I do have some complaints here: There is no such thing as “Arcane” or “Divine” traits – the proper types would be “Faith” and “Magic”. Additionally, the bonuses granted in one of the traits lack the trait-type – though the other traits get it right.
Conclusion:

Editing and formatting are pretty good, particularly for a freshman offering – the rules-language, where present, is pretty concise and the prose is well-crafted. There are sometimes minor glitches that make single lines a bit wobbly-looking in the rendition, but this remains the exception. Layout adheres to a nice 2-column two-color standard. The pdf comes sans bookmarks, which is okay at this brief length. The map and one piece of artwork is nice (and believe me – the Prequel’s art is NEAT!). One peculiarity that annoyed me is the non-standard formatting of skills: It’s not “Profession: Lawyer”, it’s “Profession (Lawyer)” -cosmetic, I know, but still…

This player’s guide does a great job – for one, it does not spoil anything; it also does make you excited about the massive metropolis and its unique social structure and options and is a nice hint at the things to come. As a freshman offering, this is pretty impressive…and it’s free. Granted, the file is massive (118 MBs), but in my book, being pay what you want does offset the minor hiccups that can be found here. So please, take a look, download and read this and check out the Kickstarter if you like what you’re seeing! My final verdict will clock in at 4.5 stars, rounded up for the purpose of this platform.

You can get this neat Player’s Guide for any price you want here on OBS!

The KS is almost funded as I’m typing this, with only 26 hours to go, so if the pitch interests you, support this one as soon as possible! You can check out the KS here!