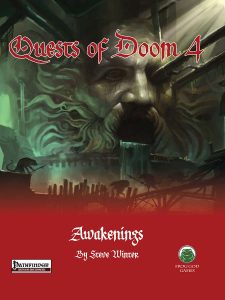 This module in the Quest of Doom-series clocks in at 21 pages, 1 page front cover, 1 page editorial, 1 page advertisement, 1 page ToC, 1 page SRD, 1 page back cover, leaving us with 15 pages of content, so let’s take a look!

This module is designated for characters of levels 1 – 3, and is an old-school adventure. This means that not all encounters are challenge-scaled, and that there’s a serious chance of PC death. I generally like old-school modules and making PCs sweat, so that per se is a plus for me.

I’d certainly recommend for adult parties, for it can become rather dark. Structurally, the module provides one of the most efficient bait and switches regarding themes that I have ever seen, and one that plenty of GMs will have an easy time pulling off due to the set-up and progression. On the downside, there is one scene that will potentially TPK the party if they think that fighting everything to the death is a smart choice. So yeah, some groups might require a bit of help/nudging from the GM there. As a whole, I’d recommend this module primarily to veteran groups. The module is much more efficient if the party has horses and/or animal companions.

So, with a variety of hooks, the premise seems old – a meteor streaks overhead, and the PCs are hired to examine/salvage the meteorite’s iron etc. If you expect some weird tentacle creature array coming up, the overland journey will strike you as super-weird, for the themes evoked are actually the Town Musicians of Bremen: The module begins with a very interesting, fairy-tale-esque angle, as all animals in the vicinity seem to slowly be increasing in Intelligence, learning to speak, etc.

This is the effect of the so-called Drift, and it is categorized in 5 stages that start as basic curiosity, and increase to full upright walking, use forelimbs properly, and communicate eloquently – this progression is based on time elapsed, and culminates at 11+ days; the drift powers are essentially spell-like abilities in anything but name (they should be classified as SPs, but I’m nitpicking there), and range in spell-level and uses from 1st to 3rd. Personally, I’d have preferred the drift powers to be codified in a way akin to corruptions, but that’s just a preference.

Anyhow, this fairy tale like scenario is played up in a fantastic manner: If the PCs have horses/animal companions, this awakening is even more impactful and rocks hard; it extends to the random encounters, and the different reactions of people to this change run a wide gamut: What about e.g. a bar with literally a sow as a mascot – who knows more than she lets on. Or what about that scene, where a family has been taken hostage by their cat and its allies? Said hostage situation is great, difficult and evocative. On the downside, the statblocks for the awakened sheep list “Feat, Feat, Feat” in their statblocks, which is a pretty obvious problem that should have been caught.

The turning point in themes from the mildly threatening to a further level happens when the PCs are faced with the heralds and servants of the Bear King: An owl with a broken wing, a chatty badger and a rabbit (called Stomper) with a taste for practical jokes make for remarkable companions to the dire elk Jostrocoles. PCs might become less, well, happy when the fanatic wolves arrive, and when the friendly badger is hurt by them – which is another chance to make friends here – friends they’ll need, for the bear king is a CR 7 stage 5 grizzly, and probably not something the PCs can beat. It’ll probably be up to the allies thus made to allow the PCs to escape captivity. The bear won’t let them just walk away. This is aforementioned thing that might be hard to see on a party of characters – they have to be okay with being captured and disarmed. Now, their badger ally will get them out, but captivity has its advantages: Here, the PCs will meet a belabra called Khotl, a strange jellyfish-like thing that can fill the PCs in regarding the mysterious phenomenon.

Khotl (who comes with roleplaying advice) tells the PCs about the grisly fate in store for their allies: The Drift is a horrible, infectious collective intelligence. The Drift will, at one point, force all infected beings to form a ginormous mass of flesh, using the bodies of its infected constituents as biomass as it levitates into space, where most beings will simply die, The driftmass will then proceed to another world, growing once more. All the weird hints granted from NPCs and companions suddenly make sense – and full-blown cosmic horror, uncaring, unfeeling, invades the module. I LOVE this. This bait and switch is FANTASTIC. Awakening to becoming a person, only to be subsumed and reduced to less than being an animal, being just biomass? That’s some seriously dark and horrifying concept.

In order to stop the Drift, the PCs have to infiltrate the driftmass, said strange meteor, and slay the core – so, provided the PCs managed to slip from the Bear King’s grasp, they have their work cut out for them.

The final part of the module, thus, is all about the PCs beating the insane things in the driftmass and slaying its core. The cartography for the driftmass lists numbers, though, while the module uses letters to denote the placement of adversaries. The map also lacks a scale and uses hexes, which implies a ginormous driftmass that makes no sense. This would be an issue, but not a crucial one.

HOWEVER. The Pathfinder conversion seriously goes off the deep end in the driftmass. The map lists 5 spots where creatures lurk; the module provides 2 creature-arrays: The first is a stage 4 gibbering mouther. The second would be a grick and a belabra (though the latter *may* have been intended to be a 3rd creature type – in such an instance, it’s missing the header designating it as such. These monsters surviving the last exodus are automatically hostile and super-dangerous.

Thing is: Provided the scale of the driftmass is not huge, all creatures  are pretty close to each other, and each of them is already BRUTAL and has TPK potential on its own. If the scale is indeed intended to be ginormous, this can be potentially done by lucky groups engaging in excellent tactics, provided they are rest-scumming AND optimized to the teeth.

This ends with the final boss, the driftcore. It’s a CR 10 (!!) stage 5 black pudding with at-will charm person, magic missile and sleep, 2/day darkness and web, and 2/day haste. It has more than 100 HP. With its reliable attack options, there is no way to not have even a clever group be TPK’d by this fellow. Even a level 3 party must be a) lucky and b) up to their A++++ game to beat this thing. Level 1 and 2? FORGET about it! If the driftmass, as I expect, is supposed to be dungeon-sized, this becomes even more ridiculous.

Now, I am a very vocal proponent for super-hard modules – and this module, up until the driftmass, was a well-wrought, deadly module. Tough, but fair. The driftmass? It becomes a horribly prickish save-or-suck fest; it’s unfair and just a mess. This can’t be done as written, at least not by even a decently optimized group at the suggested levels. Heck, even if you just kill off the PCs with magic missiles, you can kill them all reliably and easily. This is not a deadly module – it is beyond. I’d seriously consider the finale, depending on how you interpret the map situation, at best to be a solid challenge with a chance to triumph for level 4 – 5 parties. At the suggested levels, this is a guaranteed TPK.

Treasure for the insane finale? 8 pieces of gold, totaling 380 gp. No, I am not kidding.

Conclusion:
Editing and formatting are good on a formal level; on a rules-language level, I noticed a couple of hiccups, including ones that impact gameplay. Layout adheres to Frog God Games’ two-column b/w-standard, with nice b/w-artworks. The pdf comes fully bookmarked for your convenience. The cartography is nice, but lacks scale, and the second map, as noted above, sports discrepancies regarding it and the text. There are no player-friendly maps included, which is a bummer.

Steve Winter’s “Awakenings” is a module I genuinely LOVE. The atmosphere, the bait and switch, the genre-flipping, is executed in a way that is downright fantastic, 5 stars + seal level great.

Unfortunately, the conversion to PFRPG by Dave Landry wrecks the module’s finale. Up to that point, the module is brutal, as it should be as a Quest of Doom; it requires a good GM, but it works. The finale? It comes apart, regardless of how you interpret the flawed map – which is another huge strike against the module.

I frankly wished I had gotten another version, for these two problems? They tarnish what otherwise would be an outstanding offering. The map-situation is a brutal issue; the finale being so incredibly over the top regarding its lethality is devastating. I tried making mythic characters GEARED to surviving the module – you can still kill those off pretty reliably if you play the adversaries even halfway smart. That’s not just a DOOM-level super-hard module – it’s unfair and simply provided for the wrong level-range.

Now, to be frank, I should rate this 2 stars, at the very highest. But the adventure? It’s just so awesome that it may warrant investing the time to fix the botched finale. Hence, my final verdict will be 3 stars, representing here an inspired and evocative, but also deeply flawed, broken book – if you’re willing to invest the time to rebalance significant parts of the module, then this’ll be one awesome scenario that your players will keep talking about. If you’re not willing to do that, then steer clear.

I only have the PFRPG-version, but there are two additional versions. I don’t have those, though.

You can find the OSR-version (for Swords & Wizardry) here!

You can get the 5e-version here!