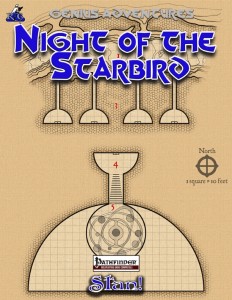 This Genius Adventure clocks in at 29 pages, 1 page front cover, 1 page advertisement, 1 page editorial, 1 page SRD, leaving us with 25 pages of content – quite a bunch, so let’s take a look!

This being an adventure module, the following contains SPOILERS. Potential players should jump to the conclusion.

All right, still here? Even in the remotest of locations, PCs have a propensity for trouble – and so, they happen upon a complex devoted to the Astronix, a being or deity sacred to many an avian race, and not on any day, but on the most sacred of nights, the Night of the Starbird. Why is this important? well, for once, the legends speak of this entity being in charge of keeping the stars in the skies – oh, and yes, massive treasure, of course, accompanies this. Now here one has to know about the massive knowledge of author Stan! regarding Japanese and Eastern mythology -and indeed, the fully provided myth of the Astronix is depicted in a detail and way that rings TRUE; as many of you may know, studying and analyzing mythology and its resonant themes ranks among my many hobbies and the Astronix’s myth qualifies as believable, organic by the hard standards I have, so yeah – kudos for that.

It should also be noticed that, while this module features Tengu, the respective characters with their fly speeds deviate consciously from PFRPG’s standard for the race in an endeavor to bring them closer to the mythological roots of the race and build on the atmosphere of the module – it is one such tengu on the trails of the Astronix, separated from the rest of his expedition force, who now crashes down in front of the PCs, wrestling with a gargoyle in mortal combat. Once the creature has been dispatched, the tengu (or the notebook on his corpse) can provide the clues for the exceedingly well-hidden door to the dungeon crawl that makes up the main meat of the module:

And indeed, the module breathes an interesting spirit – the guardian gargoyles are nigh-unkillable, courtesy of the eternal-template and after the perilous climb, dungeon-exploration follows – but in a dungeon especially designed for avian folk – the vertical dimension is pretty well integrated into the module. Indeed, from murals to doors, the level of detail provided, often with rules-relevant DCs to glean more information or interact, are rather massive.

Indeed, the writing here and its implications reach a level of coolness seldom seen in any module – and the challenges the PCs will face not only sport this depth, but also resonate with the mythi in uncommon challenges – what about e.g. symbolically helping Astronix to sweep the stars in place while the ever emboldened mythical phoenix tries to fry them? Indeed, from an artifact orrery that also doubles as a kind of hazard/puzzle to arrogant aellar honor guards, the challenges are diverse – literally every encounter has at least one unique component, not only in crunch, but also in fluff – what about e.g. all turning black – while also getting rid of the floor?

What has this to do with the tengu mentioned before? Well, turns out that the tengu are anything but faithful of Stronix, with the leader/sorceror seeking to transplant his mind into the semi-divine mythical being – so let’s hope the PCs choose the right side in the chaos and manage to prevent the villain’s step-by-step ritual; 5 move actions – a hard timer to beat, even for capable groups!

The ending, in either way, breathes the spirit of myths – whether the PCs will have to face a deadly CR 15 mythical being with the mind of a foe or just witness the rise of the avian entity, perhaps as the first non-winged folk, the climax still has my players talking – quite impressive for such an inexpensive module!

Editing and formatting are very good, I noticed no significant glitches. Layout adheres to a printer-friendly two-column standard and the pdf’s cartography is solid. The maps do not come with extra player-friendly versions, which constitutes a detriment in my book. The module comes fully bookmarked for your convenience.

Stan! is an industry-legend and if you want to know why, read this. I’m not kidding when I’m saying that this module can be considered a superb offering for any group with even the slightest inclination towards an old-school feeling of the mythical, the strange – this module can be seen as an homage to the way in which Eastern mythology is crafted and to the old-school – all while also featuring a level of detail one usually only sees in Raging Swan Press modules (Sights and sounds? Yup. Tactics? Yup. DCs and details galore? Yup.).

Where RSP’s modules usually are subdued and feel very much kind-of-realistic, this one breathes the spirit you’d expect from high-fantasy Japanese fantasy in the traditional sense; not the subdued horror of Kwaidan, but rather the blaring glory in the traditions of the myths of e.g. Amaterasu and Susano-o. This module is high concept in all the right ways and constitutes one of those glorious surprises – my only complaints would have been that this module would have benefited from vertical maps, but with the extent of detail provided, a DM can truly bring these FANTASTIC vistas to life – and no, the module does not require an Eastern backdrop to unfold all of its glory – the beautiful thing about myths like the one PCs can partake herein would be the universality they exhibit. They resound. They touch. Their images stay with you.

This is a beautiful module and the exceedingly fair price offsets the missing maps for me. This is a glorious module and well worth 5 stars + seal of approval – get this awesome little module!

You can get this high-concept module here on OBS and here on d20pfsrd.com’s shop!