Quests of Doom: Fishers of Men 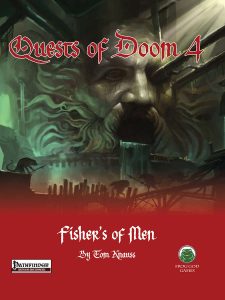 Now, while the original version in Marshes of Malice made use of the expanded environmental hazards featured in the hardcover, this stand-alone version somewhat deemphasizes this aspect, and does not feature dead references to said rules – the module can be run as is and has been properly turned into a stand-alone version.

“Fishers of Men” is an adventure for 6th-level characters, and is set in the Dragonmarsh Lowlands of the Lost Lands campaign setting – for lorehounds of the Lost Lands, this means that this is pretty easy to connect to Rappan Athuk, if desired. It should also be noted that, while the module doesn’t mention that, an important NPC to the plot comes from Endhome, the setting of “The Lost City of Barakus.” I suggest 6 characters for this adventure, and I should note that this is an old-school adventure – it is difficult by design, and probably one of the harder ones penned by the author. It is per se a location-based adventure with a relatively heavy combat focus, so a well-rounded party is very much recommended. The module sports readaloud text for your convenience.

Theme-wise, this module showcases the author’s flexibility, as it leans heavily into fantasy-horror themes, and if I didn’t know better, I would have assumed that Richard Pett or Nick Logue had written this, so yeah – this is a pretty dark one.

All right, only GMs around? Great! So, Oliver Quaywright is a visionary gourmand from Endhome, and one who kicked off a culinary trend when he realized the savory taste and succulent flesh of the mollusks from the Dragonmarsh Lowlands, An entrepreneur at heart, Quaywright realized he had struck gold, and proceeded to erect an impressive fishery to provide the supply for his delicious culinary creations – renowned among the elite. Quaywright, dubbed madmen and visionary, prospered, and while an evil slumbers in the Dragonmarsh Lowlands, it’s ultimately coincidence that provided the impetus for the grisly proceedings featured herein.

Tsathogga’s vile mind and hatred had consumed a chuul named Quattu, and said chuul stumbled over a bauble – an ioun stone, as it turns out – one that made the thing smarter. It could read the shipping label of the unfortunate it had happened upon – and a twisted plan gestated. Rallying sea hags and crabmen to its cause, the creature took the well-defended fishery in one fell swoop. The mollusk fishery, with its surprisingly-plausible pre-industrial layout, has since then been turned into a human slaughterhouse, while its servitors scour the Canyon River for prey. It’s debauchery and consumption flipped on its head, with impromptu, man-powered conveyor belts, the infestation called “purple rot”, and the horrid new masters of the fishery making for formidable foes. The living quarters of the place come with a pretty massive table of things to find, which let you add further detail to the savagery, and with azure lily pollen and the like, the complex is not for the faint of heart to tackle.

Indeed, this adventure is best tackled as a kind of assault on a fortified base by the party, with a combination of Stealth, etc. – structurally, an alert-response array of strategies would have been nice to have for the adversaries. Primarily mentioning that, since a GM responding to a full frontal assault with the adversaries herein will make the PCs rue the day… On the plus-side, the environment is pretty darn sandboxy, and allows for a wide variety of different approaches.

Editing and formatting are very good on a formal and rules-language level. Layout adheres to the series’ two-column b/w-standard, and the pdf comes with neat b/w-artworks – particularly the one depicting the fishery and its entrance deserves being called out as awesome. The pdf-version comes fully bookmarked for your convenience. The cartography is b/w – and, you guessed it. The 5 player-friendly versions of the maps that were included in Marshes of Malice? They are absent from this book. This is particularly jarring for the overview map of the massive compound of the fishery, as there is a TON going on there, and the PCs can easily scout out the map. So yeah: No player-friendly maps, in spite of them demonstrably existing. Boo!

Tom Knauss’ “Fishers of Men” has survived the transition to stand-alone module better than many of its brethren. The adventure retains the vast majority of its charm and horrifying, gory premise, and that’s a good thing. On the downside, the loss of the player-friendly maps makes the adventure significantly less convenient to execute than in its previous iteration – I certainly know that I am not particularly keen on drawing player-friendly versions of the 5 pretty detailed maps! It is this convenience detriment that makes me reduce my final verdict for this one to 4.5 stars, rounded down; if you can get your hands on it, go for the Marshes of Malice book instead. If not, then this most assuredly makes for a delightfully icky and twisted challenge.

While ym review is based on the PFRPG-iteration, there are two more versions. I don’t own those, though.

The OSR (Swords & Wizardry rules) version can be found here!